International Longshore and Warehouse Union (ILWU) members both active and retired are mourning the loss of Josh Williams, founder and captain emeritus of the legendary ILWU Local 10 Drill Team. Brother Williams, who became a member of the union in 1959, organized the Drill Team fifty years ago. The Drill Team participated in one of the first United Farm Workers marches led by Cesar Chavez on Market Street in San Francisco in 1966. Josh has been retired approximately 20 years as a longshoreman.

During my service as Local 10 secretary-treasurer, Josh and this writer worked very closely together in building the resurgence of the ILWU Local 10 Drill Team.

Composed entirely of male and female members of Local 10, the Drill Team is a symbol and public face of the ILWU. It captures the spirit of the union’s rank and file unity and power through its choreography, rhythm, syncopation and cadence.

The Drill Team is nationally known, having participated in numerous labor and community events, such as the massive immigrant rights May Day march and rally in San Francisco, labor gatherings and demonstrations and Juneteenth celebrations, Charleston Five victory celebration and the 2008 and 2016 May Day mobilizations to name a few.

In the fall of 2001, the Drill Team led one of the largest anti-war demonstrations ever held in Washington, D.C. They are recipients of over 300 awards and acknowledgements. Through the imagination and creativity of Capt. Josh, the Drill Team captivated hundreds of thousands across the country.

Throughout many decades, Capt. Josh has tirelessly volunteered his time, energy and resources to the development of the Drill Team. His dedication, commitment and vision contributed to making the Drill Team a significant component of the institutional structure of Local 10.

Through his efforts, he was able to orient new members into the customs and traditions of the ILWU. Through his work, he brought pride, dignity and enjoyment to members, the labor movement and the community. Capt. Josh never asked for anything in return!

Although he will certainly be missed, his leadership and contribution to the ILWU will not be forgotten.

Clarence Thomas, past secretary-treasurer of ILWU Local 10, can be reached at thomas-clarence@sbcglobal.net. 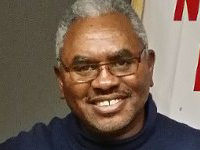