The first major survey of Bernie Sanders delegates reveals big concerns about Hillary Clinton’s pending choice of a vice presidential candidate, with many delegates expressing their willingness to publicly denounce prospective running mates and even protest on the convention floor. The nationwide survey was conducted by the Bernie Delegates Network, an initiative independent of the Bernie Sanders campaign, launched by RootsAction.org in partnership with Progressive Democrats of America. I spoke to Jeff Cohen of RootsAction after they released the survey results.

Jeff Cohen: The Bernie Delegates Network is an unofficial, independent network of Bernie delegates to facilitate communication between them and among them. It was initiated by RootsAction.org in partnership with the Progressive Democrats of America.

Ann Garrison: So, there are 1,900 Bernie delegates. How many of them are part of the network now?

JC: We already have contact with 950 delegates out of the 1,900 total Bernie delegates and we think before the Philadelphia Convention we’ll have 200 or 300 more.

AG: OK, and what did they tell you in this first survey?

JC: Well, the survey asked delegates how they would react to Hillary Clinton’s choice for vice president. And a vast majority said that who she chooses for vice president is important to them. And so we ran by, in this survey, a half dozen of the names that have been bandied about in the mainstream press as possible running mates with Hillary Clinton, and the Bernie delegates responded pretty universally that none of these candidates were acceptable.

On the list is Sen. Tim Kaine, whom the media are hawking as possibly the front runner to become Hillary Clinton’s vice president. He’s got a spotty record on abortion rights, he strongly supported Virginia’s right-to-work law, the anti-union law that’s in the state of Virginia when he was the governor.

It’s hard to find a senator who’s more moderate to conservative, more corporate than Hillary Clinton but Sen. Tim Kaine may be that person. He’s a supporter of fast track Trans-Pacific Partnership as a senator. And the survey of our delegates found that nearly 90 percent of those who responded said Tim Kaine is not acceptable.

The same thing for Sen. Warner, another senator from Virginia, who voted for the Keystone-XL Pipeline. He voted for the Trans-Pacific Partnership, and he’s been bandied about in the media as a possible VP.

AG: In his own recorded conference call with his delegates, Sen. Sanders discouraged fights on the convention floor over issues already lost in the platform committee, including support for Medicare for All, a ban on fracking, opposition to the Trans-Pacific Partnership and language regarding the Middle East, probably Palestine in particular. He said that having failed in the platform negotiations, they have zero chance of passing on the convention floor.

Do you think the Bernie delegates will agree not to take these issues to the convention floor?

JC: I think all of these delegates that are in touch with each other through the Bernie Delegates Network will be in touch with each other in Philadelphia at the convention. And we haven’t surveyed the delegates, but it’s my understanding that a lot of delegates want to make a fight over some of these platform planks that are not progressive whether the official Bernie campaign is for that or not.

Now the rules are already set; they’re a little bit rigged, and no one expects that a progressive plank that’s not already in the platform will pass, but it wouldn’t surprise me if Bernie delegates tried to make a fight of it in spite of the obstacles.

AG: The press release implies that the vice presidential choice alone is a make or break point when it says, “Can any Democratic presidential candidate afford to do without solid support from this base in a general election? That is the question Secretary Clinton and her advisers should think long and hard about.” 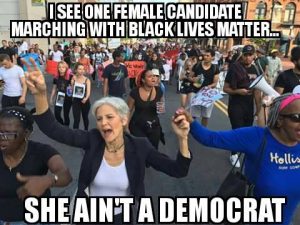 JC: Oh, there’s no doubt about it. Who she chooses for vice president may determine whether she wins the election or not.

So I think it’s obvious that if Hillary Clinton wants to try to make a center-left alliance to defeat Trump, she would choose a vice president who’s progressive, perhaps someone who endorsed Bernie or at least someone who can galvanize the progressive base of the Democratic Party. Remember, nearly 45 percent of Democratic voters and caucus goers supported Bernie. So nearly half of the party has said, “No, we’re progressives.”

If she chooses a corporatist, a centrist, like Sen. Tim Kaine from Virginia or HUD Secretary Castro or the senator from New Jersey, Cory Booker, or the senator from Virginia, Mark Warner – if she goes in that direction, we could have a replay of 2000, where Al Gore was running for president and he did something very difficult. He found someone even more conservative than him to be his vice president and that was Joe Lieberman, who, within a few years, had left the Democratic Party to become a supporter of Bush-McCain and Iraq War fanaticism.

So it’s very clear that smart strategy would tell Team Clinton that you’ve got a major problem with millions of voters on the left who are not happy with you and are watching who you choose as your vice presidential running mate very, very closely.

AG: Do you have a plan to survey on other issues as the network grows?

JC: Yes, there is a survey that’s gone out about people demanding a roll call vote, a full roll call vote at the convention, where there are nominating speeches and they go state by state and people cast their votes for Hillary Clinton or Bernie Sanders. I’ve already sent tentative results for that to the Sanders campaign and it’s been received.

Delegates want to see a full roll call between Hillary and Bernie Sanders on the convention floor, and I’m sure there will be other surveys and conference calls.

AG: Are you going to survey the Bernie Delegates Network about how many are just going to cast a protest vote before they leave the party?

JC: There are only so many things that the network can be surveyed on in the remaining time we have. So you’re saying how many of them are going to vote for Hillary?

AG: We all know there’s a Bernie or Bust movement, and it may include some of these delegates.

JC: If it does, we haven’t heard from a lot of them. Maybe there were two or three that were saying, “Why are you asking me about the vice president? I’m not voting for her no matter who she chooses.” But that was just two or three out of hundreds.

AG: Sure, but I’m also considering the possibility that the way the questions are asked might be determining the answers.

JC: Again, I assume there are some Bernie or Busters but they seem to be a small group.

AG: Will you ask the question?

AG: How many delegates are going to Philadelphia simply to cast a protest vote?

JC: What do you mean a protest vote?

Of course we don’t have records of how those delegates and their constituencies ultimately voted at the ballot box, but the convention was in shambles, with the peace delegates singing “We Shall Overcome” and the house band playing “Happy Days Are Here Again” to drown them out. Then the peace delegates left the hall to hold a candlelight march.

Some argue that Nixon prolonged the war more than Humphrey would have, some not, and we’ll never know that either.

AG: I get mail from a group called Bernie or Bust. I can’t tell whether any of them are Bernie delegates, but they’ve been saying they plan to hold a mass de-registration from the Democratic Party event in Philadelphia.

JC: How’re you gonna do that in Philadelphia if you live in New York?

AG: I haven’t heard them say how they plan to do it, but I’m in California and I know I could do it on my phone if I were in Philadelphia. I changed my own registration online recently and it took me about five minutes.

JC: I’m on Facebook and I see all the Bernie or Bust stuff. I met them in Chicago at the People’s Summit. I don’t know how many of them are delegates, but I think there’s a lot of gradation amongst the Bernie or Bust people. Some may just refuse to work for Hillary’s election. Others may refuse to vote for her and instead vote for Jill Stein and the Green Party.

AG: Thanks for sharing the survey and your further thoughts about this.