Atlanta – Senior White House officials, city leaders, educators, community residents and inmates gathered inside the All Faith Chapel at the Atlanta federal prison on May 9 to hear a debate team of three inmates with lengthy custodial sentences challenge a team of three Morehouse College undergraduates. The highly anticipated event was themed The Great Debate and Reentry Forum: Everyone Deserves a Fair and Second Chance.

The event was spearheaded and co-chaired by Dr. Belay D. Reddick, author of “There’s No Danger in the Water” and current inmate at the Atlanta federal prison, and Dr. Bryant T. Marks, associate professor of psychology at Morehouse College and commissioner for the White House Initiative on Educational Excellence for African Americans.

The debate started at 10:15 a.m. There were approximately 250 people in attendance. The crowd was very excited and lively. While the Morehouse debate team argued in favor of the Fair Chance Act, the inmates argued in favor of Second Chance Pell. The spectators clapped their hands in agreement as both teams were tasked with defending a position they supported.

“The impact that Dr. Marks and I wanted to have on members from the community is that when they came to this debate, they’d hear something that would motivate them and move them in a direction toward pushing for criminal justice reform. And of course the other inmates who were at the target of this, we wanted them to come out of this event with a sense of how much the Obama administration cared about people with criminal justice involvement,” said Dr. Belay D. Reddick.

“To be honest, from the outset we didn’t know what to expect,” says Joseph Thompson, 36, who is from Atlanta. He was sentenced to 67 years for his minor role in multiple armed bank robberies and hopes to be granted clemency.

“This was our first debate. None of us had any experience at presenting an argument. Once the competition started, it was just as we practiced.” 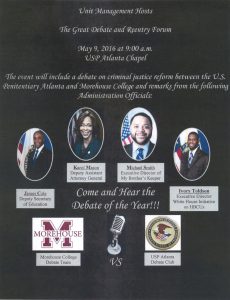 “Our class is so much more than debate training. We discuss family issues, we talk about politics, and we update one another on new case laws. I guess you can say we’re like a support group.”

“Another inmate I served time with at USP Coleman had invited me to one of the debate sessions. He told me that it is the best class he’d ever taken in the 20 years of his incarceration. I couldn’t agree more,” Thompson concluded.

The Atlanta federal prison, once listed as the most dangerous of all federal prisons, supported Dr. Reddick’s efforts in forming a debate team. Three months ago, he invited the all-men college over for a friendly competition.

The White House officials arrived at the prison shortly after 8:00 a.m. They were greeted by a special team of correctional officers and then escorted to a classroom in the education building for a 40-minute closed door discussion of education and criminal justice reform with members of both debate teams before the contest.

“Sitting down with eight senior White House officials in a private meeting was groundbreaking for me,” says Edmund Philips, 36, a UNICOR payroll clerk and father of one. Sentenced to 26 years in 2001 for a number of armed bank robberies, he hopes his rehabilitation and good behavior will make him eligible for early release.

“I appreciate them putting everybody at ease. Inside the room, you didn’t have inmates seated on one side of the table and the White House officials on another. We actually sat next to each other, which I thought was pretty cool. It was clear that they had a genuine interest in our concerns. I listened carefully to what they had to say and even took some notes,” Phillips said.

“Growing up wasn’t easy for me. I was raised on the Southside of Chicago by a single mother. I was robbed at the age of 14. I grew up around gangs. I could have been right here where you all are,” said James Cole, The White House’s general counsel.

At the end of the event, Minister Charlie M. Holiday-Wilson, founder of 1 on 1 Personal Development, commended Dr. Reddick for the positive things he does to assist other inmates and staff, such as facilitating reentry programs like Mastering Conflict, Alternatives to Violence, and Gent Talk.

“I just want to say that this has been an amazing moment for me,” Minister Wilson said. “I am so proud; I’m so impressed. I’m just happy. Dr. Belay Reddick is doing great work inside this facility,” she continued.

“Partnering with Dr. Reddick has truly been an honor and a blessing,” she said.

President John F. Kennedy once said, “Our progress as a nation can be no swifter than our progress in education.”

The government should expand educational opportunities for people with criminal justice involvement. Imagine for a moment the impact if Pell grants were given to incarcerated men and women – if we all agreed that real prison reform starts with education. That’s the belief of inmate advocates who have worked to bring higher education into prisons over the past two decades.

Congress passed legislation in 1994 banning government student aid to prisoners in federal and state institutions. Since that time the number of in-prison college programs plummeted nearly 97 percent, an overwhelming reduction in the opportunities available to inmates who want to secure a productive life after they are released.

After years of bad law signed by former President Bill Clinton, the Obama administration wants to make Pell grants available to prisoners through a limited pilot program. The effort is part of a broader push by the administration to overhaul the criminal justice system.

Let’s be honest here: Education empowers people to take control of their lives and gives them the necessary tools to succeed in the workplace.

Further, a recent study found that a one-year increase in post-secondary education reduces murder by almost 30 percent, auto theft by 20 percent and arson by 13 percent.

A 2013 Rand study found that inmates who took college course in a correctional institution had 43 percent lower odds of returning to a prison bunk than inmates who did not.

Congress has a golden opportunity to restore Pell grants for the nation’s incarcerated so they will have the chance to reintegrate as productive members of the community post-­incarceration. Instead, some members of Congress criticized the notion and threatened to block federal funds from going to in-prison education. Roadblocks to education not only undermine successful reentry, but also prevent prisoners from maximizing their potential.

Many inmates today would like to improve themselves with college educations. In order to do this, many will need help to cover tuition, books and other educational-related expenses.

What does this do? Give them something constructive to focus on while serving time that dramatically increases their self-esteem and chances of finding decent employment once they are free.

That’s a good feeling to have as a returning citizen.

The U.S. already has the highest incarceration rate in the world. Roughly, about two-thirds of all state prisoners and 40 percent of all federal prisoners fall back into a life of crime within three years of release.

Society should view those numbers as disturbing and unacceptable.

Being a federal inmate myself, I can attest that receiving college degrees and special training through outside prison scholarship programs have been instrumental in my growth. What I have seen for the past 12 years of my incarceration is a high number of African American males coming into the system without high school diplomas.

After befriending many of them, ages 18 to 25, I also discovered that they were at a loss for positive male role models. What affected me the most was hearing them say that they wanted to do better in life, that they all had dreams of becoming someone great.

Hearing this prompted me to become an adult literacy education tutor. I felt the best way to make a difference in their lives was to help them obtain their GED certificates while mentoring them at the same time.

Education has to become one of the top priorities in criminal justice reforms, which I strongly believe will pay big dividends for America.

I hope the government expands Pell grant eligibility for students in prison. The majority behind bars will benefit greatly.

Dr. Belay D. Reddick is a federal inmate at the United States Penitentiary in Atlanta who is the author of “There’s No Danger in the Water: Encouraging Black Men to Become Mentors.” Send our brother some love and light: Dr. Belay D. Reddick, 22043-018, USP, P.O. Box 150160, Atlanta GA 30315.