“A 90-day moratorium on use of force is actually the norm in certain places,” said Lisa Marie Alatorre of the Coalition on Homelessness. “Even asking SFPD and the city to take this seriously is a way for us of asking everyone to take seriously a paradigm shift in (policing).”

While two heavily armed police officers stood directly across the street watching us, a group of the most impacted, unhoused, criminalized, injured, disabled, Black, Brown, Trans and Indigenous peoples gathered to demand a 90-day moratorium on the killing of our Black, Brown, disabled and unhoused residents of this city and all cities struggling with the ongoing murder of our children, youth, elders and families.

“In 1989 CRISIS training went into effect in Memphis. Today this training has gone nationwide, but the number of police shootings of people with disabilities has exploded – and not only people with mental health disability but people who are autistic, deaf and even blind,” said Leroy Moore, disabled poverty skola and Po’ Poet from POOR Magazine and founder of Krip Hop Nation, who co-signed onto this moratorium. 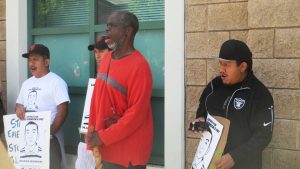 “Every 28 hours someone who looks like me is murdered in this country by law enforcement, security guards, and vigilantes – that’s an emergency,” said Bilal Ali, revolutionary Black Panther and founder of the Peoples Commission for Justice, who co-signed onto the moratorium and is a revolutionary alternative to the “selected,” pimped and played Police Commission. “Brown, poor and disabled people are also continually targeted by these slavecatchers,” Bilal observes.

“This is an emergency. Our children are being murdered,” said La Mesha Irizarry, mother of Idriss Stelley, who was shot by SF Police, and one of the co-signers of the emergency moratorium.

“Due to the extreme danger, murder and ongoing targeting of young people of color, trans people, disabled and unhoused people by police forces in the U.S., we the targeted, criminalized, injured, unhoused Black, Brown and Indigenous peoples hereby call for a state of emergency, a moratorium on the use of any firearms or weaponry by all police forces in the U.S. – specifically, weaponry, tasers, guns, AR15 rifles, UZIs etc. – while on duty as police officers in any line of duty for the 90-day period following the call for the moratorium.” – from the Moratorium on Police Use of Force 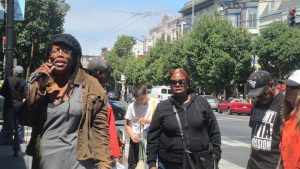 “As a formerly unhoused, low-income single mother, my heart hurts beyond words for sons, fathers, sisters, mamas, daughters and caregivers Jessica Nelson-Williams, Korryn Gaines, Luis Demetrio Gongora Pat, Charles Kinsey, Kayla Moore, Antonio Guzman, Mario Woods and so many more. This is a state of emergency for our babies and our families,” said Tiny Gray-Garcia, co-founder of POOR Magazine, who were co-signers and co-writers of this moratorium, poet with the welfareQUEENs and author of “Criminal of Poverty: Growing Up Homeless in America.”

“In this 90-day period, it is our goal to explore the option of complete disarmament of police forces as well as the multitude of community-based solutions that have been discussed, explored and conceived by movements of impacted peoples, including Black Lives Matter, the Brown Berets and others across the U.S. and in other countries whose police forces do not use weaponry at all.” – from the Moratorium on Police Use of Force 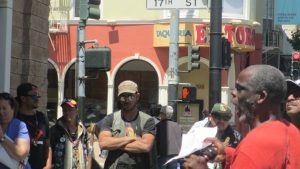 The money that will be saved from the continued purchase of high grade, murderous war weaponry which costs millions of taxpayer dollars, can be redistributed to impacted, injured, unhoused, targeted, and police terrorized Black, Brown, injured, colonized, incarcerated and criminalized families, elders, youth and community.

“If you are taking a crumb from the man, step to the side, people are dying, “Quennandi Sheba, POOR Magazine staff writer, poet, teacher and member of the welfareQUEENs said, making the connections between the ways that non-profiteers consistently enable evicting of the poorest among us. Programs like RAD, which POOR and the Bay View reported on and non-profits have fed off of for funding, causes the serious rise in evictions and homelessness of poor, Black and Brown people.

“On this day, when the already decided on fake-ass ‘selection’ process for a new police chief in San Francisco begins, we poor mamas, uncles, fathers and brothers ask that the job of police chief be renamed ‘conscious community caregiver,’ who actually protects the people and serves the community. This new job has new job duties and new qualifications and I nominate Mama Mesha, Bilal, Leroy, Muteado, Queenandi and Vivi T among a few of the nominees that actually have a track record of caring for the community,” concluded Lisa Tiny Gray-Garcia.

This call is being made in honor of so many of our Black, Brown, Indigenous, disabled, trans children who have been abused, murdered and/or shot as of July 2016. We stand with and support all other efforts by groups such as Black Lives Matter and the Brown Berets to abolish, reduce or end the militarization of policing. To sign on to the moratorium and lead a press conference in your city or town, please email deeandtiny@poormagazine.org.

To sign on to the moratorium and lead a press conference in your city or town, please email deeandtiny@poormagazine.org. 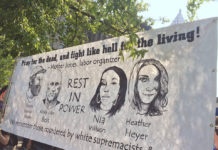