KPFA News Anchor Sharon Sobotta: Beni Territory sits in the Democratic Republic of the Congo’s North Kivu Province, bordering Rwanda and Uganda. It is a vivid example of the phrase, “Everybody wants a piece of Congo.”

Beni Territory is rich in oil, timber, gold, diamonds, wolfram, coltan and cassiterite. Now the people of Beni are being massacred for their land and its riches. KPFA’s Ann Garrison filed this report after speaking to a Congolese human rights defender and author of “Congolese Genocides from Leopold II to Paul Kagame.”

KPFA: Boniface Musavuli, Congolese human rights defender and author, said that the massacres in Beni Territory began in 2014. Estimates are that 60 people are killed every month. After the Aug. 13, 2016 massacres, the number of victims rose above 1,200.

There is little doubt that the massacres in Beni Territory are in fact occurring, because it is so rich in mineral resources essential to the manufacture of modern life in the industrialized nations. Musavuli said, however, that the aggression has been falsely attributed to Ugandan Islamist rebels with ties to Al Qaeda and Al Shabaab. The truth is, he said, that the killers are Rwandans and Ugandans who want to eliminate indigenous Congolese people to claim their land and resources.

Boniface Musavuli: In reality, killers in Beni are individuals who are coming from Rwanda and neighboring Uganda. Their goal is severely to eliminate indigenous peoples in order to take ownership of their land rich in resources.

KPFA: Rwanda and Uganda have been accused of trying to annex portions of Congo across their borders, and some U.S. policymakers and pundits have advocated carving independent states out of eastern Congo, as South Sudan was carved out of Sudan, despite the war and human catastrophe that ensued after South Sudan’s independence.

Beginning in 2014, Reuters and AP wires reported that the Allied Democratic Forces, a phantom Ugandan Islamist group associated with Al Qaeda and Al Shabab, was responsible for the massacres in Beni, though many scoffed at the idea that this militia had suddenly reappeared after years of inactivity. Recent reports by UN investigators have proven the Islamist militia theory to be a fraud.

Musavuli confirmed that and added that the Congolese government may have used the Islamist extremist explanation to appeal to Western sympathizers and hide the fact that its own military officers were complicit in attacks on the indigenous people of Beni Territory.

MB: We always wonder why the Congolese government continues to attribute the killings in Beni to Islamist terrorism. Perhaps, for the government of Kinshasa, it is a way to attract the sympathy of Western countries which are facing the Islamist terrorism. But what is true is that several reports have claimed that the killings in Beni are the acts of individuals operating with the complicity of the authorities, including mainly military officers.

KPFA: Many Congolese believe that the Congolese government of President Joseph Kabila is complicit in Rwandan President Paul Kagame and Uganda President Yoweri Museveni’s attempts to annex portions of eastern Congo. They point to new massacres in Beni that occurred shortly after recent meetings between the three presidents. 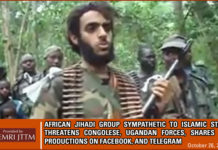