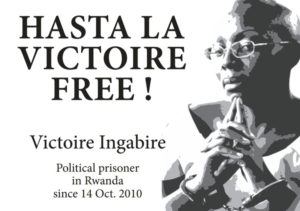 KPFA/Ann Garrison: Victoire Ingabire’s international supporters used social media and the hashtags #IngabireDay and #HastaVictoireFREE to announce that they have named the anniversary of her arrest and imprisonment “Ingabire Day.” In December 2013, Rwanda’s Supreme Court upheld Ingabire’s conviction for conspiring with terrorists, encouraging Rwandans to rebel, and “genocide ideology,” which means challenging Rwanda’s constitutionally codified and legally enforced history of the Rwandan massacres of the 1990s.

Here is Ingabire speaking in 2010, the year she attempted to run for president against Paul Kagame, but went to prison instead:

Victoire Ingabire: I would like you to understand that this trial is politically motivated, because I am accused of being a divisionist. For us, where RPF [Rwandan Patriotic Front] sees divisionism, we see political pluralism. They have to accept the diversity of our society and see how it can be used positively. It is the only way to end cycles of violence in our country.

I am accused of having genocidal ideology. It is a crime that every opponent of this government is accused of. For us, where the Kagame regime sees this genocidal ideology, we see the right of memory and recognition of all the victims because we believe that is the only way to achieve a true reconciliation in our country.

KPFA: For 22 years, the Rwandan government’s radically simplified and decontextualized history of the massacres has been used to justify President Paul Kagame’s totalitarian rule in Rwanda. For 20 years it has also been used to justify the U.S.-backed invasion, occupation and plunder of the immensely resource rich Democratic Republic of the Congo, despite 22 years of U.N. reports documenting Kagame’s army’s atrocities in both Rwanda and Congo.

Kagame and his partner, Ugandan President Yoweri Museveni, have claimed that their troops must hunt down Hutu genocide perpetrators who escaped into Congo in 1994, despite abundant evidence that the troops are really there to seize Congolese territory and plunder Congolese resources.

After 10 years of research in Rwanda and Congo, University of Michigan Professor Allan Stam described the Kagame regime’s excuse for being in Congo in his lecture at the Ford School of Public Policy, “Understanding the Rwanda Genocide.”

Professor Allan Stam: From 1998 to 2000, the RPF gets control of the eastern Congo, all the way from Kisangani, or what was formerly known as Stanleyville. This is the last navigable point on the river coming up from the Atlantic Ocean. As the crow flies, Kisangani is 470 miles from Kigali. By the roads, it’s about 800 miles.

We interviewed the defense minister and the solicitor general of the Rwandan Supreme Court, and Christian and I asked these guys, “What are you guys doing in Kisangani? It’s kinda far. It’s sorta like going from Washington, D.C., to St. Louis.”

And he said, “Well, we have security concerns! There are Hutu militias in the jungle!”

And we said, “Yeah, y’know, we went there. And we saw ‘em. But, you don’t have to go to Kisangani to find them. They’re five miles over the border. So why are you guys 500 miles into the Congo?”

And there’s this long pause, and the solicitor general – he’s the guy that really lost it. And he says, “I went to the University of Chicago. I have a master’s degree in international relations. I’ve read Hans Morgenthau.

“I’m a realist. I know that the United States doesn’t give a shit about what we do in this country, in this part of the world. We’re gonna do what we think we need to do to guarantee our security and wealth.”

They’re his words. Christian and I looked at each other. Christian’s just shakin’ his head like, “I can’t believe you just got this man to swear at you.” And I was like, “Wow. This is great. I can’t believe this guy just admitted to occupying the eastern THIRD of AFRICA to enrich him and his buddies.”

KPFA: President Bill Clinton was in power during the Rwandan massacres and during the Rwandan and Ugandan invasions of Congo in 1996 and 1998. Clinton frequently sheds crocodile tears about his so-called failure to intervene in Rwanda, despite documentation that he in fact intervened to make sure that U.S. ally Gen. Paul Kagame won the war and seized power in Rwanda, no matter how high the human cost.