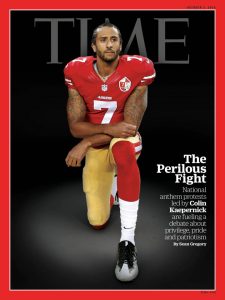 He bulldozed burial grounds, sacred Standing Rock Sioux sites
He blew up the Macondo Well, killing – his team – 11 workers,
He dinked and dunked 200 million gallons of crude oil in the
Gulf, killing tens of millions of mussel, shrimp, crab, fish
and livelihoods. He spirals bomb trains through towns and cities,
fireballs exploding, incinerating residents and their homes –
No wonder freedom-loving “white” folks hate him, threaten his life!

He game planned playthings like Al-Qaeda and ISIS, propping up
War profiteers after The Evil Empire collapsed
He broke huddle in the UN running traps on Iraq, play-faking WMDs
He called coups in The Congo, Honduras, Ecuador, Venezuela, Libya,
Everybody blames Clinton for. He twerked and taunted conquered
countries and assassinated leaders: “We came, we saw, he died!”
No wonder freedom-loving “white” folks hate him, threaten his life!

He barks, “Hut-hut-hut-’08-13 trillion-2 Big-2 fail-2-Big-2-Jail – ”
Smash-mouth bail out of banksters looting our economy; He checked-
off at the line of scrimmage – bull rushing and crushing Occupy;
He quarterback sneaked beer in the Rose Garden with po-po, post-Skippy-
Gate; He play-faked Emanuel AME with “Amazing Grace,” before taking
Tuesday’s “deep-shots” –
No wonder freedom-loving “white” folks hate him, threaten his life!

He motioned right, across formations: thousands of Black New Orleaneans
trapped on rooftops, waving flags; Then went weak-side: “Brownie’s doin’
one heckuva job!” His bomb blew up Black girls in their Birmingham
Sunday School. He shot the Black man running a fade route in the back,
and planted a throwaway gun at his feet; He picked six Black Lives Matter
Men from Ferguson for shooting and cremation in cars –
No wonder freedom-loving “white” folks hate him, threaten his life!

He can tell the truth and throw a pass
Raise consciousness sittin’ on his ass
Study video of the latest police killin’
Call racists out when others ain’t willin’
Yes, he’s the one, he’s the one
The one they call The Seventh Son

He can speak truth that sounds so sane
Even detox a FOX-poisoned brain
He can back movements, lift the fight
Strike some serious blows at the right
Yes, he’s the one, he’s the one
The one they call The Seventh Son

He can air the crimes of a racist cop
Radicalize talk in the barbershop
Out the profiling they call the “beat”
Grab ears of brothers in the street
Yes, he’s the one, he’s the one
The one they call The Seventh Son

A breath of fresh air from the Bay
Amplifying what we’ve got to say
Hustlers pushin’ “get out the vote”
He took a knee, rocked the boat
Yes, he’s the one, he’s the one
The one they call The Seventh Son