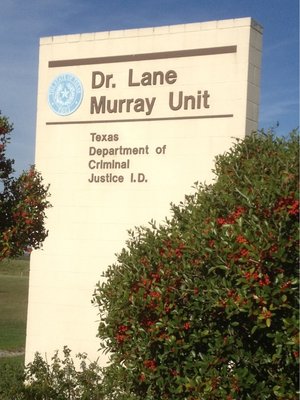 The Texas Department of Criminal Justice (TDCJ), in particular, Lane Murray Unit, is infamous for their “cross action” ways, in which the prison officials write bogus disciplinary cases, utilize threatening language consumed of epithets, abuse their authority, retaliate by destroying inmates’ personal property, tearing up cells during cell searches, utilize excessive “use of force,” deny inmates release to population even though they meet the requirements, and deny us rank, medical and/or psych assistance. The list goes on and on at the unit unanimously nicknamed “Miserable Murray.”

Investigations and surveillance and/or substantive monitoring needs to begin immediately. Gatesville, Texas, is a prominent area for racism. And the prisons have made it a duty to hire their worst racists. Ninety percent of the prison officials are in fact racist and disrespectful.

Lane Murray Unit is extremely tainted with corruption and the dire need of an ombudsman is evident. These officers are continually bullying, taunting, ridiculing and humiliating inmates, sexually harassing and underhandedly convicting inmates writing disciplinary cases that are lies.

Living in the misery of Ad-Seg causes much psychological damage. Justice needs to be served. Investigations and surveillance and/or substantive monitoring needs to begin immediately.

Gatesville, Texas, is an area submerged in evil and hatred that wants inmates to basically die. They’re biased against inmates because of a crime we did or did not commit.

I am writing seeking justice, help and assistance, fighting the cause for women in Texas prisons. I suffer daily for the wrongs I have or have not committed along with other women who don’t deserve “double jeopardy” punishment and abuse. Just being in prison is punishment enough.

We need help! The slavery of prison must end. Women in prison face abuse by the hands of those who are supposed to screen us for security, not inflict harm.

About me: I am an offender housed in Ad-Seg at Lane Murray Unit for four years and counting. I’m currently a Stat-4 Level One, and I’ve been major case free for two and a half years, meeting all the requirements to be released from Ad-Seg, but yet I’m still held in captivity for unjustifiable reasons.