We, the community of writers, artists, contributors and readers outside and behind the walls, collectively condemn the ongoing attacks, censorship and banning of our San Francisco Bay View National Black Newspaper. For many years, officials in several prison systems, including the state of California, have from time to time taken away our incarcerated family members’ “freedom of speech” and rights to information, education, communication and connection with our broader community by denying them their Bay Views.

Censorship of the Bay View was rampant during the historic mass California hunger strikes, but enough papers reached their subscribers that 30,000 prisoners, according to the Corrections Department’s own count, got the word and participated in 2013. Now prison officials around the country are in a panic over the nationwide prison strikes and are attempting the impossible: to keep the word from their wards.

Notices are arriving daily denying the September Bay View to prisoner subscribers. So far they’ve come from New Folsom, Old Folsom and Lancaster prisons in California, Menard Prison in Illinois and all prisons in Pennsylvania. In phone calls and letters, prisoners in Alabama, Ohio, Indiana, Virginia, South Carolina and elsewhere say they are being denied their papers but their prisons haven’t issued the legally required notices to them or to the Bay View.

This latest “banning” comes a month after the U.S. Department of Justice (DOJ), Federal Bureau of Investigation (FBI) and corporate media conglomerates like the Disney-owned American Broadcasting Company (ABC) published false reports that the SF Bay View, Black August commemoration committees, Black Lives Matter movement and others denouncing police murders of innocent African Americans were “inciting violence against law enforcement and prison officials.” These are outright lies! Nothing could be further from the truth!

In this, the month of October, when truth and justice seekers are commemorating the 50th year of our Black Panther Party for Self-Defense and its revolutionary Ten Point Platform and Community Survival Programs, we see this as another in a series of long-running acts by the U.S. and state governments’ disruptive and deadly COINTELPRO (counter-intelligence program) repression. The mission of the SF Bay View has always been, throughout its 40 years of publishing, to seek justice and give a voice and opportunities to those suffering from injustice with no way to tell their stories.

We encourage others in our community around the Bay Area, U.S. and internationally – and outside and behind the walls – to increase your support for people’s media. Specifically, you can assist the SF Bay View by:

Help us expose the unjust collaboration between profit-seeking corporations, including the media, police and prison guard unions, and the government officials who fear them.

We are grateful to everyone for your past, present and future support!

Jahahara Amen-RA Alkebulan-Maat advocates for power to the people politically, economically and culturally and is known particularly for his leadership in the struggle for reparations. He can be reached at support@africansdeservereparations.com. 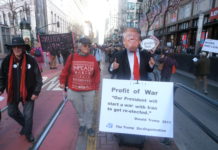