Slavery has not been abolished in the United States of America. We call this the land of the free, but it is presently home to 2 million active slaves and approximately 6 million document­ed as slaves for future use. You ask how the land of the free can be home to some 8 million slaves and why Americans know noth­ing about it?

The answer is that Congress enacted the 13th Amendment in 1865, two years after the Emancipation Proclamation. It abolished slavery throughout the country but it al­lows all states to enslave all persons convicted of a crime. This amendment gave the government the right to make slaves of your loved ones.

Slavery is hidden behind the prison walls. Men are beaten and killed, women are molested, abused and raped, and juvenile girls and boys are assaulted, sexually abused and treated in ways too horri­ble to say. It is time we woke up and faced the truth about the im­morality of this country – true corruption.

Slave sweatshops have been erected throughout the Texas penal sys­tems. Prisoners are forced to work in these unsafe and health hazard environments to enrich the Texas Department of Criminal Justice (TDCJ) and its agents.

Congress enacted the 13th Amendment in 1865, two years after the Emancipation Proclamation. It abolished slavery throughout the country but it al­lows all states to enslave all persons convicted of a crime.

These sweatshops are destroying the economy, businesses and raising the rate of unemployment to record levels. Note that taxpayers’ dollars and federal funding are not utilized to upkeep the prison system.

The public is not aware that their loves are literally serving, in some cases, decades beyond their court imposed prison sentence – enslaved all that time. The facts are:

This corruption and more is happening in your back yard. You have purchased slave products, and by doing so, you are causing your own economic demise. Your tax dollars make Ameri­ca a nation of 8 million slaves.

How can we Americans serve as a model for other countries, if we are the worst of the worst. The only difference is the other countries are forthcoming in their actions. America hides its evil deeds, making it the worst kind of satan. The tough-on-crime laws were meant to create a slave market, not to deter crime.

Along with the $30,000 per inmate that incarceration takes out of your tax dollars, federal funding and the $2 billion annually that politicians and private investors receive to enrich themselves makes this incarceration nation the biggest slave trade organization ever. Tough-on-crime laws are not a campaign for the safety of the people but for self-enrichment. This is why hundreds of laws are enacted annually: TO PRODUCE MORE CRIMINALS!

Wake up, America! Your citizens are dying daily in slavery and you are financing their demise. It is time you take a look over the walls of corruption because your loved one is a true American slave just like during the slavery days of old. 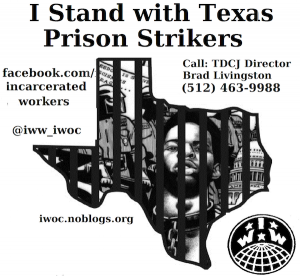 On Sept. 15, 2016, I was escorted to the Security Threat Group Office at the H.H. Coffield Unit and informed by TDCJ Sgt. Robert Walker that I was being classified as a leading member of an organization determined to be a security threat. I was told that high-ranking prison officials in Texas wanted me placed in long-term solitary confinement, better known as administrative segregation. This step was taken in response to my peaceful organizing of prisoners for the Sept. 9 National Prison Work Stoppage.

However, I am sad to report that my work in Coffield Unit was sabotaged. Approximately three weeks earlier, a member of the Islamic community in Coffield who had never posted anything about the Sept. 9 work stoppage posted a threatening message concerning the strike. I was not informed nor did I have any input about the message; I was totally blind-sided.

Prison officials on the unit, including Lt. G. Richards, were well aware that I have never promoted violence in my education and organizing efforts. Nevertheless, in a blatant act of sinister deception, Lt. Richards wrote a major disciplinary infraction against me, charging me with responsibility for the threatening message!

Sisters and Brothers, I tell you I have never threatened the people or the prison guards with violence – never! I have always operated by the philosophy that violence would be counterproductive to our efforts. And I must tell you that prior to the posting of this volatile message by one of my own “Muslim Brothers,” my organizing efforts here on Coffield Unit were going great!

Please know that, behind the scenes, some horrible deals are being made between “the oppressor” and brainwashed members of the oppressed, seeking to actively harm leaders of this movement.

To abolish prison slavery – and one day to abolish prisons altogether – is a daunting task. Capitalists who operate prisons in Amerika feel very threatened by the media attention and strong show of solidarity by prisoners and their supporters.

It is only natural for prison officials and law enforcement agencies in the United States to go after organizers such as Imam Siddique Abdullah Hasan and Sean Swain of the Free Ohio Movement. We must seek to protect Kinetik Justice of the Free Alabama Movement. We must not allow the capitalist oppressors to hijack our movement.

Please continue to amplify my voice and the voices of all the members of the Incarcerated Workers Organizing Committee. Dare to struggle, dare to win! All power to the people!