In January 1994, 23-year-old DeWayne Ewing and a girlfriend discarded a condom as they left a park in the Oakland hills. A rape took place in the same park a few days later, and three days after the rape, police found the condom under a bush and put it with the rape kit.

Thirteen years later, in June 2007, police pulled DeWayne over for an illegal turn and arrested him for rape on a cold hit DNA match. He’s been imprisoned all but 11 months since. Yes, the condom is his, but there is NO EVIDENCE OF ANY KIND THAT LINKS THE CONDOM TO THE RAPE.

He got an indictment.

After spending more than four years in Santa Rita County Jail without trial, DeWayne, refusing a plea deal and, demanding a jury trial, finally won a court date. After preliminary hearings on the morning of July 11, 2011, Judge Joseph Hurley, a former prosecutor and Alameda County chairman of the Republican Party, ordered the courtroom locked during the lunch break.

DeWayne’s attorney, William DuBois, who had said he would “vigorously defend DeWayne,” with an “expert DNA witness prepared to testify,” told DeWayne he would not defend him after all. Judge Hurley threatened DeWayne with four life sentences if he insisted on a trial and lost. Frightened and intimidated, DeWayne accepted a 25-year deal.

DeWayne’s attorney, William DuBois, who had said he would “vigorously defend DeWayne,” with an “expert DNA witness prepared to testify,” told DeWayne he would not defend him after all. Judge Hurley threatened DeWayne with four life sentences if he insisted on a trial and lost.

From prison, he filed a writ of habeas corpus on the grounds of ineffective assistance of counsel. The Alameda County Superior Court denied the writ, and the California Appeals Court and Supreme Court upheld the denial. But on Oct. 14, 2016, the Northern California federal district court under Judge Charles Breyer ordered the California Attorney General to show cause in 60 days – which expire Dec. 18 – why DeWayne’s habeas should not be granted.

“The very officials of the court that should protect me from injustice violated my every right as an American citizen. This is a complete travesty of what the judicial system was meant to protect against.”

The AG’s office is now deciding whether to appeal or accept Breyer’s decision. If they appeal, DeWayne will have a chance to respond, and then Breyer will make the final decision. If he rules in DeWayne’s favor, or the AG’s office doesn’t appeal, the case will go back to the Alameda County District Attorney, who will have 90 days to finally either try DeWayne or release him.

In his “Statement of Facts: The Story of a Found Condom,” DeWayne writes: “This whole experience was new for me, my family and my wife. I did not realize that justice is not for all – especially me, an innocent man trapped in the California penal system. I am not a criminal. Now I truly realize the very shameful and illegal misconduct of both William DuBois and Judge Joseph Hurley against me and my family.

“I did not take this deal intelligently. I wanted to face my accusers – for them to say to my face that I did this horrible act against them, which they never said I did. The very officials of the court that should protect me from injustice violated my every right as an American citizen. This is a complete travesty of what the judicial system was meant to protect against.”

If any readers have had negative experiences with William DuBois and would write a Declaration Under Penalty of Perjury to the California attorney general explaining their history with DuBois, please email freedomfordewayne@gmail.com, call 510-228-9458 or write to the Bay View.

Charlie Hinton performs the solo show “Solitary Man: My Visit to Pelican Bay State Prison.” He is a member of Haiti Action Committee and the Prisoner Hunger Strike Solidarity Committee to End Sleep Deprivation. He’s been working with DeWayne’s family to free DeWayne Ewing since 2009. He can be reached at ch.lifewish@gmail.com. And DeWayne Ewing can be reached at AI-4771, MCSP B9-141L, P.O. Box 409040, Ione CA 95640. 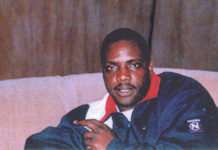 Two trials and an anniversary: Bonds, Bailey and Mixon

A hard look at the trial of Oscar Grant triggerman Johannes Mehserle, Part 2