The trial of the killer cop who shot an unarmed Black man (named Walter Scott) is off. Hung jury.

If the videotaped killing of Scott wasn’t shock enough, the hung jury certainly suffices. The images are, to say the least, chilling.

A middle-aged Black man is seen fleeing in terror from a calm, younger white man. The runner appears to be one unaccustomed to running easily, yet he is running, away from the calm-faced white man wearing a dark uniform.

The white man pulls a weapon, aims and fires, shot after shot, after shot, after shot. Eight shots in all. A Black man, clad in a bright green shirt, crumbles to the green earth and breathes his last. The white cop calmly bends over and picks up a dark object with wires hanging from it, walks back to the body and drops it nearby. He looks as if he’s strolling on a beach in the Bahamas, with not a care in the world.

But video, apparently, wasn’t enough, at least to one of the jurors hearing the case, who refused to convict ex-cop Michael Slager of the killing.

The murder of Walter Scott, caught on tape, proves, if proof were needed, that Black lives don’t matter, at least for that juror. And guess what? Apparently, videotape doesn’t matter – when a Black person gets killed by a white cop.

The beating of Rodney King, on tape, by LAPD – remember? A predominantly white jury ignored the video and acquitted the cops.

The murder of Walter Scott, caught on tape, proves, if proof were needed, that Black lives don’t matter, at least for that juror. And guess what? Apparently, videotape doesn’t matter – when a Black person gets killed by a white cop.

Even if the taking of those lives is shown on videotape. 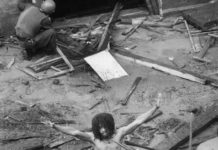