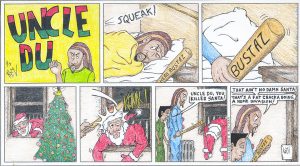 Thank you for the opportunity to share my work with an audience that will appreciate it. You had me there for a minute. When I opened the envelope and saw the samples I sent you along with my letter, my heart sank. I thought, “Oh, no! They didn’t like it.” Once I read, “It’s a deal!” my heart came back to life and a big smile appeared on my face.

Enclosed you will also find a letter (excerpts below) from the real “Uncle Du.” He was the inspiration for the character and the one who originally suggested I send it to you. He’s very excited about it.

Again, thank you for this opportunity. You have no idea how much this helps in keeping me motivated while I fight to prove my innocence. If any of your readers want to write to me with comments or criticism, it’s OK. I’m sure you know how much incarcerated people like to receive mail.

I pray that the Goddess Isis blesses you and your family with health and spiritual wealth.

I think that’s wonderful! When he told me he wrote y’all to see if y’all would publish the strip, I knew y’all would do it, because “Uncle Du” is all the news in Bay View rolled up in one. Everything “Uncle Du” stands for is what Bay View stands for, so it’s a perfect match.

If you knew me, you would see that not only does the character look like me, but it IS me. I’m pro-Black down to my bone marrow and I don’t play no games with my Blackness! And that’s being reflected in the comic strip.

I just want to thank you for putting “Uncle Du” in your paper and allowing us to use it as a platform to help spread the word about Black greatness. I’m so pro-Black that my gods and goddesses gotta be Black.

I was born and raised in an Afrocentric household. My mom was a Black Panther in the New York chapter and she raised me and my siblings up in the ancient Egyptian religion. “Black gods for Black people” is what she raised us up with.

Right now we’re working on a movie script called “Death of a Nation.” It’s about all the Black and Brown people leaving Amerikkka and returning to our ancestral homelands because we’re tired of all the oppression by white Amerikkka. It’s a lot of drama in between, but the end is Amerikkka dies without us and it’s a “what if” movie that will reflect all the real world issues and conflicts that are current in Amerikkka now – issues like mass incarceration, racism, police brutality, political corruption etc.

Also, “Uncle Du” has an Instagram and website that I want you and the readers to check out: @UncleDufromtheInside and www.reallyrealworldwide.com. Check out the Mandu-Ra videos.

Again, thank you for accepting the comic strip. We’re gonna make y’all proud. When we take our talents to the next level, we’re gonna make sure we pay homage to Bay View, because you guys are the FIRST to give us exposure. 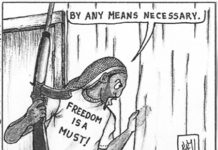