Oakland – At 4 a.m. on the morning of Saturday, Jan. 21, 2017, a network of Oakland community members took over Marcus Garvey Park, a public plot of land at 36th Street and Martin Luther King Jr. Way in West Oakland, moving in small homes, a hot shower, a healing clinic and other services – declaring it a people’s encampment for those who need housing and basic services. The group, which includes folks living on Oakland streets, activists from #FeedthePeople and #Asians4BlackLives and various individuals from the community, said that the move-in demonstrates their ability to provide what the City of Oakland cannot to its most vulnerable residents.

The group aims to demonstrate through their visionary encampment that housing is a human right. They also hope to demonstrate that, in the face of a city government that fails to meet the needs of its people, it is possible for the community to unite to serve those on the street in a dignified and humane manner.

The group criticizes the inaction of the City of Oakland, saying that the City has proven to be disloyal to its long term families displaced in this city-initiated housing crisis. The group also claims that the City has not implemented sufficient efforts to address homelessness, such as building permanent public housing for those who have been displaced by the housing crisis, particularly Black and Brown residents.

“What #FeedthePeople is offering us is a better situation than what the City has offered us,” said Red, a resident. “#FeedthePeople seems to get things rolling. They have a place for us to go to that’s safe, dignified, and has services for us all.”

The group began moving into Marcus Garvey Park in the middle of the night and set up the village of services. The center of the village, spokespeople said, will become a community space reserved for daily people’s assemblies and will provide services to the residents.

The group hopes to demonstrate that, in the face of a city government that fails to meet the needs of its people, it is possible for the community to unite to serve those on the street in a dignified and humane manner.

Volunteers have begun planning for a health and healing clinic, hot home cooked meals, a hot shower, raised gardens, a computer lab, adult education center and a center for distributing donations to Oakland residents in need. The village is open to all who need services provided, whether you live at the site or not. And no registration is needed.

The village is narcotics and alcohol free and begins with prioritizing housing for Black and Brown folks, families, women, elders and disabled folks. Eventually the encampment hopes to keep growing to be able to welcome more homeless residents in Oakland to move in and to offer the appropriate services to meet their needs.

Organizers also hope that their version of what a compassionate community looks like inspires others to reclaim public land in other parts of Oakland, the Bay Area and the country to build similar havens of safety, service and community. There has been a lot of products given out to ensure the safety of many people, you can see details here.

The encampment is not meant to be a permanent solution but addresses the immediate needs and harm reduction of some of the City of Oakland’s more than 3,050 homeless residents. Oakland’s homeless population makes up 49.2 percent of all of Alameda County’s houseless.

Homeless numbers are growing, spokespeople said, as a direct outcome of the city’s housing affordability crisis. The housing market in Oakland has skyrocketed, and a vast majority of landlords no longer accept Section 8 vouchers.

Many of Oakland’s homeless residents have vouchers for Section 8 housing but cannot find a rental agency that will accept the public housing program. Currently there are only 386 beds available in Oakland shelters.

The City of Oakland’s “Compassionate Communities” effort that claims to be a pilot program has earmarked $190,000 of the City’s general budget funds for addressing homelessness. However, the program only allows trash pickup and porta-potties for a single sanctioned encampment for six months.

New residents do not get registered for inclusion in the program and were told to leave when the camp footprint was recently halved by force in preparation for permanent closure of the encampment by March 31. The programs are not scalable, and only a select few benefit.

Homeless numbers are growing, spokespeople said, as a direct outcome of the city’s housing affordability crisis. The housing market in Oakland has skyrocketed, and a vast majority of landlords no longer accept Section 8 vouchers.

An interim housing provision gives residents hotel vouchers that last no longer than six months, an unrealistic timeline for finding permanent housing, and the program includes no proposals for long-term subsidized housing. This is not a pilot program to address homelessness.

This is an experiment in camp removal and suppression. After being criticized for the false claims of the program, the city responded that their Phase 2 of the program is to create a permanent homeless encampment made up of tiny homes not tall enough for residents to stand up in.

“Housing is a right. Being without a home is not a crime. The politicians that created this crisis are the criminals.

“Yet folks without shelters have been ignored, harassed, shuffled around, degraded and criminalized. The responses from City officials, CalTrans and police has not only been ineffective but degrading and even criminal,” said #FeedThePeople member Chiedza Kundidzora.

“Institutions like CalTrans continually violate homeless communities’ constitutional rights with their protocol towards folks living under freeways. They seize and destroy people’s property without due process and as a cruel and unusual punishment for circumstances that are treated as criminal.” she said.

The action responds to several recent incidents, including a Jan. 1 fire at the Wood Street encampment, one of Oakland’s largest encampments. Some residents moving into the encampment were displaced by the fire on New Year’s Day.

Others are choosing to relocate to the camp seeking the safety, services and dignity the village offers. Twenty-four-hour security, hot showers, sturdy shelters, privacy and community support are also incentives for residents.

“Housing is a right. Being without a home is not a crime. The politicians that created this crisis are the criminals,” said #FeedThePeople member Chiedza Kundidzora.

Saturday’s action was also inspired by Malcolm X Grassroots Movement’s call to #BeUngovernable and to “build and fight” to resist illegitimate government, most recently manifested by Donald Trump’s inauguration as the 45th president of the United States.

The action takes place a day after hundreds of thousands of people across the country took to the streets and declared their cities to be zones free from displacement, mass deportations, registries, attacks on poor people and corporate giveaways of public goods. Instead they called for protection and expansion of healthcare, housing, food and free public education for all.

“Today we stand in solidarity with the poor, houseless and displaced people of Oakland, many of whom are Black and Brown. As #Asians4BlackLives, we realize that gentrification, inaccessible housing and privatized public land are a part of the ongoing war on Black people, which also includes racist police violence.

“We support the leadership of the homeless folks moving into this camp, and stand together with them in the fight for dignity and the fight against displacement,” said Ellen Choy of #Asians4BlackLives.

Activists and residents hope to unite communities that face displacement, destruction, terror, poverty and violence to stand together in the fight for housing for all and promote self-determination in the face of an illegitimate government.

Following move-in on Saturday, Jan. 21, the group hosted a People’s Inauguration, the first of the daily people’s assemblies, at the site at 36th Street and Martin Luther King Jr. Way at 12 noon. The assembly was open to other housed and unhoused people who want to work on supporting The Village and directly addressing the housing crisis in Oakland.

“We support the leadership of the homeless folks moving into this camp, and stand together with them in the fight for dignity and the fight against displacement,” said Ellen Choy of #Asians4BlackLives.

All those offering support to the community as individuals were welcomed to join the assembly. Representatives of nonprofits, the City and police were not invited.

#FeedthePeople, a collective of Oakland residents and activists, including some currently or formerly homeless, has been distributing food and supplies to homeless encampments in the East Bay for over a year. Every Wednesday, volunteers share hot home cooked meals, much needed supplies, hugs and support to people living on the street. They also provide advocacy and support to folks on the streets when they are harassed by police and politicians.

#Asians4BlackLives, a diverse group of people of Asian descent based in the Bay Area, focuses on nonviolent direct action for Black liberation. The group originally came together over two years ago in response to a call from Black Lives Matter Bay Area and the larger Black Lives Matter movement to show up in solidarity with Black people in their struggle for liberation. The group has been involved in direct actions to support campaigns ranging from #StopUrbanShield to #BlackTransLivesMatter to #NoDAPL and regularly supports calls from Black-led groups for solidarity statements and actions. Connect with them at a4bl.tumblr.com and @Asians4BlkLives. 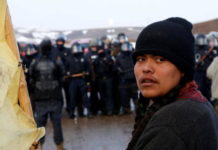