Most presidential elections concentrate on the candidates – their views, positions and, perhaps more importantly, their persona.

Of course, we don’t really know these people, but thanks to modern communications, we think we do. They are, in reality, familiar strangers.

We see them in commercials or on televised interviews.

But the real object in a political democracy should be the people, for without voters, how can there be elections? Average people are often ignored, while the rich are courted like lovers.

What few pay attention to isn’t just average people, but the true nature of politics.

For the rich and powerful, they perform transactional politics or, to simplify, they treat their votes as part of a transaction – and demand, “For my vote, I want X.” For poor and working-class people, they practice affective (or emotional) politics. That means they vote on how a candidate makes them feel.

Being poor and thought powerless, they demand nothing, for they feel unworthy to make demands. They want help, not power.

Thus, class consciousness informs political systems, and the poor are forever disappointed by the politicians they’ve voted for.

That’s because they vote for who they like, not what that candidate has promised them.

This politics of betrayal has left many feeling like they can’t trust any politician, for they’ll only lie, get in and do what they want anyway, right?

Why? Most people demand nothing. Why are we surprised when we get nothing?

Affective politics is for children. Transactional politics makes demands, which, if not met, exact political consequences.

The time has come. No longer need economic leaders choose political puppets to do their legislative bidding. Today, they simply buy, bribe or lie their way into political power.

The late Eldridge Cleaver, minister of information of the Black Panther Party, once said that when fascism comes to America, it won’t need a swastika; it’ll be singing Yankee Doodle Dandy – and waving American flags.

What is fascism? The popular political definition is the union of corporations and the state.

Because of naked fear and brute ignorance, America has voted for a new political reality. And although it seemed as if the Republican Party was hurtling towards self-destruction, the Democrats lost what initially seemed like a sure thing.

The Democratic Party, whose head honchos insured the fall of the insurgent candidate, Sen. Bernie Sanders, may’ve also insured failure by opting for yet another Clinton, remembered now for the ruinous economic impact upon workers because of NAFTA (North American Free Trade Agreement)

NAFTA spelled the end for any Clinton victory in labor-heavy precincts, like Ohio, Michigan and Pennsylvania. Ironically, many of the people who voted for Trump were themselves beneficiaries of the Clinton crime bill, which helped establish dozens of prisons in lightly populated rural areas of Pennsylvania, even becoming the largest employer in some counties.

I’d wager that over 90 percent of prison guards voted not for the family that gave them lifetime jobs (Clinton), but for her nemesis: Donald Trump!

Not even the personally popular President Barack Obama could carry Hillary Clinton across the finish line, for his coattails did not reach that far.

Welcome to the New Fascism – unleashed will be the most racist, vicious and nationalist forces in the country. That’s what “America First” really means. (Guess who’s last?) 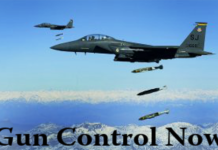 March for our lives and the rest of the world’s 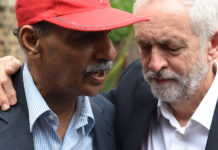 Jeremy Corbyn, the Labour Party and the UK’s socialist surge