“If you are deaf, dumb and blind to what is happening in the world, you’re under no obligation. But if you know what’s happening and you don’t do anything but sit on your ass, then you are nothing but a punk.” – Assata Shakur

Aug. 12, 2017, a myriad of white nationalist groups amalgamated in the city of Charlottesville to protest the removal of a Confederate Gen. Robert E. Lee statue. This “unite the right” white nationalist rally was the largest gathering in over a decade, according to ABC News. David Duke, the former grand-wizard of the Ku Klux Klan who is also an avid supporter of Donald Trump, was one of the organizers.

During this rally they were met with counter-protestors. One group yelling Nazi slogans armed with military style weapons protesting to preserve symbols and systems of oppression, whereas the other group is fighting oppression and symbols that represent it. Out of the blue, a vehicle driven by a 20-year-old white neo-Nazi plowed directly into the crowd of the counter-protestors, injuring many and killing one.

Later that evening, Trump felt the pressure mounting and was compelled to hold a news conference. It’s not what he uttered but rather what he failed to mention that I found baffling. He was also fiercely criticized by his own Republican Party, Democrats and the news media.

During this rally they were met with counter-protestors. One group yelling Nazi slogans armed with military style weapons protesting to preserve symbols and systems of oppression, whereas the other group is fighting oppression and symbols that represent it.

During his election campaign, he condemned Obama for failing to label terrorism as “radical Islamic terrorism,” claiming that if you don’t call it what it is, you can’t address it. What happened during that rally was unambiguously an act of terrorism perpetrated by a white neo-Nazi; however, Trump, who is quick to call out people and groups by name, failed to denounce the white nationalist groups behind that act of terror but rather blamed it on “all the sides involved.”

That absurd assertion was also criticized during what was planned to have been a press conference on infrastructure on the 15th of August. He went off script and doubled down on his contention that it was both sides involved who were responsible and remained adamant in his refusal to label it an act of terrorism. Had that driver been a Muslim, it would have been called terrorism in mere seconds. He went on to throw salt on the wound by labelling those white nationalists, KKK and neo-Nazis as “very fine people.”

What happened during that rally was unambiguously an act of terrorism perpetrated by a white neo-Nazi; however, Trump, who is quick to call out people and groups by name, failed to denounce the white nationalist groups behind that act of terror but rather blamed it on “all the sides involved.”

This wasn’t surprising considering that during his election campaign he encouraged the use of violence against those who opposed him, even offering to pay legal fees for whoever punches a man in the face who disagreed and voiced his discontentment. Despite his supporters instigating and initiating violence, he still blamed those who opposed him.

The optics of his rallies resembled lynch mobs. His divisive and hateful rhetoric during his campaign made these white nationalist groups feel as though he spoke for them and that their message was no longer taboo.

Upon being elected into office, he encircled himself with people in his cabinet who are xenophobic, nationalist, bigots and misogynists. His failure to call out those white nationalists and label that cowardly act terrorism is solely due to the fact that he views KKK and neo-Nazis as his base.

After Trump’s initial response to Charlottesville, David Duke sent a tweet reminding Trump that he should remember it’s the white Amerikkkans who put him in office. Following the second press conference, when Trump doubled down, David Duke, who apparently is very active on Twitter, thanked Trump for standing up for white Amerikkkans.

His presidency has only exacerbated racial tensions and further divided the already divided nation. He has set the tone for white nationalist groups to come out of the shadows, and there is no ambiguity whatsoever as to where he stands. His “leadership” or lack thereof further helps explain the rise of hate groups and hate crimes, which have dramatically proliferated, particularly in the South.

What we witnessed in Charlottesville was cumulative and reminiscent of the 1960s and as far back as memory or history serves. It’s 2017, yet the evils of white supremacy that our great leaders – Nat Turner, Harriet Tubman, Malcolm X, Huey P. Newton, George Jackson, Martin Luther King Jr. and more – gave their lives confronting is still a perennial ideology that we continue to confront. Despite slavery being “abolished,” its residue still pervades.

“America first,” “Make America great again,” “Deport immigrants taking your jobs,” “Build the (border) wall,”
“Ban Muslims” – Trump’s rhetoric and policies have only fueled the hate white nationalist groups have towards non-whites. Bluntly speaking, he is the wind beneath their wings.

He has taken white supremacy ideologies and put them on the mainstream, which is why with him as president they feel validated, justified and relevant. When Hillary Clinton labelled Trump supporters a “basket of deplorables,” I’m certain these were the people she was referring to.

It’s 2017, yet the evils of white supremacy that our great leaders gave their lives confronting is still a perennial ideology that we continue to confront. Despite slavery being “abolished,” its residue still pervades.

What precipitated the chain of events that transpired in Charlottesville was the planned removal of Confederate Gen. Robert E. Lee’s statue, so I’ll get back to that. Some white Amerikkkans, in particular Southern whites who mostly reside in segregated rural communities, believe that the Confederate flag and statues are merely an emblem of “Southern pride,” not hate. They contend that it’s a part of history we can’t erase. This is a poor attempt to justify or decorate what the Confederacy stood for.

The Confederate flag and statues represent people who committed treason and took up arms against their own country, seceded and attempted to create their own nation in order to perpetuate the institution of slavery. The Confederate flag as we know it would’ve been the national flag of the newly formed nation, “The Confederate States of Amerikkka,” composed of the Southern states that had seceded.

What led Abraham Lincoln to declare war against the states that seceded and his decision to issue the Emancipation Proclamation freeing slaves wasn’t a moral decision but rather political, for he had an obligation to preserve the union. Had the union lost the Civil War, the “Confederate States of America” would have been its own nation.

The Confederate flag and statues represent people who committed treason and took up arms against their own country, seceded and attempted to create their own nation in order to perpetuate the institution of slavery.

These Confederate statues displayed on public grounds commemorating men who fought, died and lost the Civil War are a painful reminder of people who fought in order to perpetuate and maintain the institution of slavery, oppression, exploitation, brutal torture, rape of New Afrikan women, separation of families, genocide, white supremacy et cetera. These Confederate statues and flags epitomize the greatest crimes against humanity and there is absolutely no way that they can be embellished to minimize what they truly represent.

Normalizing the Confederate flag or naming a street or school after a Confederate general does not mitigate the evils of what they stood for. It demonstrates how apathetic Amerikkka has been towards New Afrikans (Blacks).

Amerikkkans are sympathetic to the Jewish community for the atrocities and genocide they were subjected to under Adolf Hitler. We don’t have any schools or streets named after Hitler. There are no Nazi flags and statues displayed on public grounds. However, when it pertains to New Afrikans requesting that Confederate flags and statues be removed from public grounds and moved into a museum, they aren’t as sympathetic and it becomes an issue open for debate.

The night prior to the white supremacy rally, hundreds of young white Amerikkkans marched in the campus of the University of Virginia yelling chants such as “Jews will not replace us,” “Blood and Soil” and “White Lives Matter,” all the while holding tiki torches. It’s eerie imagining what our ancestors were subjected to as they may have heard similar chants while they were being hanged.

We currently have a president who considers KKK, neo-Nazi white nationalist groups to be “very fine people” and refuses to repudiate their actions. He has some three years remaining until the next election. People must continue to resist fascism, stand up against white supremacy and against hate.

These white nationalist groups must be met with unceasing resistance, by all means necessary. Should history be our guide, we have seen what happens when hate groups go unchecked.

These Confederate statues and flags epitomize the greatest crimes against humanity and there is absolutely no way that they can be embellished to minimize what they truly represent.

Which leads me to salute the work of the anti-fascism organization Antifa. As a man and a member of the New Afrikan Black Panther Party Prison Chapter, I stand in agreement with Antifa’s stance that there can be no negotiating with Nazis, KKK or other white supremacy groups. They must be met with resistance.

Their notion of an “all white Amerikkka” in essence means genocide, and what transpired in Charlottesville only illustrates that they have no reservations about killing anyone who disagrees with their ideology. Trump has only empowered them.

There’s an adage that says: “If you’re not outraged, you’re not paying attention.” The logic of procrastination or being acquiescent isn’t a luxury we can afford.

Despite the enormity of the challenge which lies ahead, be it the fight to have Confederate statues and flags removed from public grounds or against the ideology of white supremacy, the inexpugnably robust power of a unified people will ultimately have the final say so. History cannot be erased, but it can be written.

In the meantime … Resist!

Dare to struggle! Dare to win! All Power to the People! Panther Love. 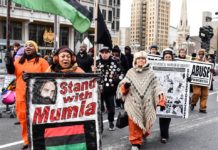