The 13th Amendment of the U.S. Constitution reads as follows: “Section 1. Slavery prohibited. Neither slavery nor involuntary servitude, except as a punishment for crime whereof the party shall have been duly convicted, shall exist within the United States, or any place subject to their jurisdiction.” 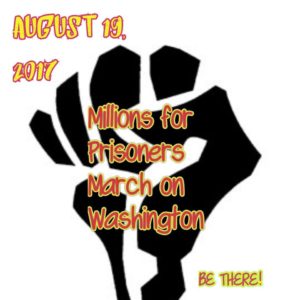 Salamu! Greetings of solidarity from behind enemy lines. I am a New Afrikan freedom fighter from the ranks of JLS (Jailhouse Lawyers Speak), a collective of jailhouse lawyers organized to educate and fight for prisoners’ human rights, against a system that is designed to dehumanize its captives. I am also the national secretary for Amend the 13th, an inclusive coalition-based national campaign and community-based organizing effort to address the legal and social basis for dehumanization in Amerika.

The purpose of this press release is to notify prisoners, community organizers and all those who care of the upcoming Millions for Prisoners Human Rights March in Washington, D.C., scheduled for Aug. 19, 2017. This is a national effort to bring world attention to the 13th Amendment enslavement clause, its ramifications, and to solidify organizing efforts to amend it.

A)  We DEMAND the 13th amendment ENSLAVEMENT CLAUSE of the United States Constitution be amended to abolish LEGALIZED slavery in America.

B)  We DEMAND a Congressional hearing on the 13th Amendment ENSLAVEMENT CLAUSE being recognized as in violation of international law, the general principles of human rights and its direct links to:

In essence this is an abolitionist movement to abolish legalized enslavement, a practice that is not solely limited to prisoners making products, but extends to a prisoner’s mere body in an isolation cell being profitable.

The U.S. Supreme Court states in its longstanding precedent, Ruffin v. Commonwealth, 62 Va. (21 Gratt.) 790, 796 (1871): “A convicted felon, whom the law in its humanity punishes by confinement in a penitentiary instead of with death, is subject while undergoing that punishment, to all the laws which the Legislature in its wisdom may enact for the government of that institution and control of its inmates. For the time being, during his term of service in the penitentiary, he is in a state of penal servitude to the state. He has, as a consequence of his crime, not only forfeited his liberty, but all of his personal rights except those which the law in its humanity accords him. He is for the time being a slave of the State. … They are slaves of the State undergoing punishment for heinous crimes committed against the laws of the land.”

In other words, prisoners themselves are the commodity. Which explains why law enforcement’s entire apparatus is geared towards capturing and bottling humans for the highest bidder, dead or alive.

In essence this is an abolitionist movement to abolish legalized enslavement, a practice that is not solely limited to prisoners making products, but extends to a prisoner’s mere body in an isolation cell being profitable.

It should not be any surprise that the Black and Brown communities are prime targets for extractions. We cannot overemphasize the connection between slavery and the Prison Industrial Enslavement Complex.

Prison slavery is a direct outgrowth of the 13th Amendment and the 13th Amendment enslavement exception clause is a direct outgrowth of the pre-1865 chattel enslavement period. You can analyze the different periods of transition from convict leasing, Black Codes, Jim Crow, Nixon’s war on drugs to Bill Clinton’s 1994 crime bill to see the connections and the architectural designs developed to maximize profits through the INjustice system’s criminalization of generations.

All across Amerika, people are becoming more aware of the 13th Amendment exception clause – particularly prisoners around the nation, who have been strategizing and directly challenging the 13th as witnessed by the Sept. 9, 2016, prison strikes. Jailhouse Lawyers Speak has been planning its challenge to the 13th in collaboration with iamWE Prison Advocacy Network since mid-2015. 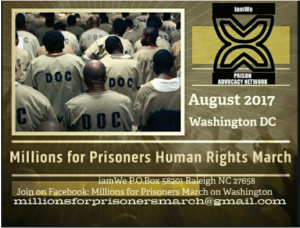 This challenge is the Millions for Prisoners Human Rights March, hosted by iamWE Prison Advocacy Network. Presently, coalitions are being formed that we envision will become a recognizable force for change beyond the March. Just as we envision every Aug. 19th afterwards being a day of solidarity and demonstrations in recognition of Prisoners Human Rights and highlighting the violations of such for collective action.

In the words of Mumia Abu-Jamal, “Black August is a month of divine meaning, of repression and radical resistance, of injustice and divine justice; of repression and righteous rebellion; of individual and collective efforts to free the slaves and break the chains that bind us.”

Black August was selected by JLS prisoners, due to its significance as being a historical month of commemoration of fallen New Afrikan freedom fighters and resistance. This is a month in which the spirit of liberation is encouraged amongst prisoners and within our communities.

Black August is a special month to many of us confined. Comrade George L. Jackson is a light to many of us struggling to maintain our sanity and dignity within these concentration camps. It is only fitting that this event be scheduled during this month, in hopes of connecting more people to the prison resistance movement history, challenges and needs.

Today as I write, confirmation is coming in that prisoners are in collective discussion around the country to be in solidarity with the Millions for Prisoners Human Rights March. For those prisoners who would like to participate, it is asked that you:

Around the nation and across the world, Aug. 19, 2017, will be remembered as a day of collective action, strategizing and execution of the national objective to abolish legalized enslavement in Amerika. People from all walks of life from both sides of the walls have answered the call. Many are organizing their areas to be at the march, others will be hosting local solidarity demonstrations in their state or country, others are distributing info and many others are sharing resources and time.

To learn more about this event and how you can get involved, visit www.iamweubuntu.com or write iamWE Prison Advocacy Network, P.O. Box 58201, Raleigh NC 27658. Also involved in the organizing is the Incarcerated Workers Organizing Committee (IWOC), a committee of the Industrial Workers of the World (IWW), 816-866-3808, iwoc@riseup.net.