Based in the Oceti Oyate camp, which is on land claimed by the Army Corps of Engineers, we have a clear view of the incredible amount of work that needs to be done to resist the Dakota Access Pipeline, the Black Snake that legend says will come some day and poison the water, the water of life.

At the current moment, parts of the camp are in the process of being relocated as the camp is expected to be invaded when the evacuation deadline, set by the Army Corps of Engineers, arrives Feb. 22. Oceti Oyate is in urgent need of both skilled and unskilled labor to not only assist in the day-to-day camp operations, but to assist in the deconstruction, transport and reconstruction of tipis, yurts, and tarpis.

To aid in this goal, Hanson Lee, acting with the Buddhist Tinkers, who have the audio and video recording equipment to present the views of the water protectors on the ground, is in the process of organizing a bus to transport people from the Bay Area to Standing Rock.

Oceti Oyate is in urgent need of both skilled and unskilled labor.

The fight here in Standing Rock is not over. The courageous people here, in the face of practically overwhelming military force, are dedicated to protecting their land.

Consider this a personal call to action. The oil must not flow through Native land. It is important to remember that the Dakota Access Pipeline is being built on Standing Rock tribal land, land that even the U.S. government recognizes is theirs in a treaty signed in 1851. That treaty, however, has been continually broken since 1868.

This is not only a fight for water, the lifeblood of all, but a fight for the self-determination of indigenous peoples, who, time and time again, have been persecuted, abused and manipulated by the United States government that occupies land it stole from Native peoples. The United States will never willfully, without Native resistance, concede to the Native peoples because that would amount to an admission that tyranny, blood and racist injustice forms the historical basis for the United States.

The fight here in Standing Rock is not over. The courageous people here, in the face of practically overwhelming military force, are dedicated to protecting their land.

As KRS-One once said, “There could never really be justice on stolen land.” This is why Standing Rock, and all morally just people, continue to resist the Black Snake – the dreaded and useless Dakota Access Pipeline.

We must kill the Black Snake. The oil must not flow.

New instructions: Information on the bus to Standing Rock can be found at www.BuddhistTinkers.com. Watch the first video below to learn more about current events there.

If you want to get on the bus to Standing Rock or have questions, contact tinkerhansonlee@gmail.com. Write “BUS TO STANDING ROCK” in the subject line of an email stating your name, phone number, email and any other pertinent information. The organizers will get in touch with you as soon as they can, and the bus will leave as soon as 10 people sign up. More trips may be arranged for between March 13-30.

Here’s what you need to know before you get on the bus:

Cole Huther can be reached at colehuther@gmail.com. However, access to anyone at Standing Rock is intermittent at best. 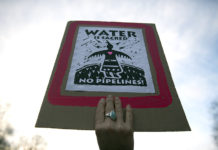 Wherever you are, you too can strike a blow against the Dakota Access Pipeline