Shola Adisa-Farrar is coming home to debut her new CD, “Lost Myself,” on Wednesday and Thursday, Feb. 15-16, in Oakland and San Francisco. Perhaps you remember her from The Ultimate Hustler reality television show she starred in Oct. 4-Dec. 13, 2005, while she was in New York? Maybe you recall how much fun you had with Shola as guide in the Walking in the Spirit: Black Paris and Beyond tours while there? No? Then it had to be at the Annual International Maun Arts Festival in Burkina Faso in October 2014, where the U.S. Embassy music ambassador performed with her band and then taught songwriting and production workshops there and on subsequent trips in Mauritius, Burkina Faso or Cape Verde?

A global citizen, Sister Shola gets around, and it all started with a challenge. Tired of New York, the accomplished singer-songwriter-actress decided to move to Paris in 2011 for a few months. It was just before her 26th birthday, she writes in a book co-authored with her mom, Opal Palmer-Adisa, and her sister, Teju Adisa-Farrar, entitled: “Fame, Money, Power Not Required.”

In the e-book, the three women share how they came to live the lives they love. Through personal stories and practical wisdom, the enticing journey is within reach if we reflect on the 12 Credos. These chapters address topics from “Self-Investment: Your Mental Foundation” and “Be Your Own Heroine” to “Let(ting) Your Passion Give You Wings.” The Palmer-Adisa-Farrar women show how they kept the launch pad clear while they cultivated the wealth to finance the flight. Readers see how easy it is to let the person trapped inside free.

The stories are fun and lighthearted, yet packed with examples of how these women have conjured visions of the selves they have become. Shola speaks about the fear she felt until she reframed it: “I told myself that what I feared held my greatest gift, my boundless potential and ultimate power.” 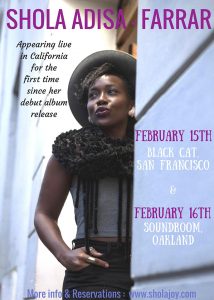 Shola’s two concerts are Wednesday, Feb. 15, 9 p.m., at the Black Cat, 400 Eddy St., 415-358-1999, in San Francisco, and the following evening, Thursday, Feb. 16, 8 p.m., at The Sound Room, 2147 Broadway, 510-496-4180, in Oakland. She will be joined by women musicians, something different and exciting for her. Ruthie Price, drummer, and Maya Kronfeld, pianist, will join Shola. The bassist hadn’t been confirmed when Shola and I spoke. Both venues are intimate and Shola has a following, so if you don’t want to be one of those unlucky fans standing in the rain, get your ticket in advance.

Although the serendipitous aspect of “Lost Myself” can’t be denied, it didn’t hurt that Shola had been singing for a year at La Reservoir’s Sunday Jazz brunch and HOT Casa Records’ Duo DJ liked her sound. Duo DJ imagined the synergy between the vocalist and his friend, Florian Pellissier, Parisian pianist, composer, arranger. He wasn’t wrong.

Creatively, that day, Shola met her artistic soul mate. From “jazz autobiographies, swapping music and improvising together, a studio collaboration was born,” Shola writes, “in the hidden basement of Colorblind Studio on Paris’s Left Bank.” Whether it was naughty and nice or just naughty, “Lost Myself” was born almost a year ago, April 2016. Look for an EP Remix on the one year anniversary late this spring. Magical – “Lost Myself” gives celestial evidence to an artistic union. It’s available at Amoeba Records in Berkeley, online at sholajoy.com and at the concert.

The 10 tracks feature Shola’s original work and several standards. A favorite standard I recognized is “Feeling Good” (with a new arrangement) and “I Have a Dream,” a Herbie Hancock classic that influenced Florian, a New School for Jazz and Contemporary Music graduate, known for the hard-bop style he brings to his music. Shola wrote lyrics to the lovely Hancock melody.

“Lost Myself” sets a new artistic standard whether that is “Evolution,” “Flow,” “Blue Chord” or one of my favorites, the Fela Anikulapo Kuti cover, “Sorrow, Tears and Blood.” She says she chose the song to honor the linguistic lineage of her Yoruba name, Shola, which means “one who is blessed.” The song was also chosen for its political resonance and the connection to the continent, more specifically a country, Nigeria, she will visit in April.

Riding in on pianist Florian Pellissier and drummer Tibo Brandalise’s opening chords, the vocalist sings: “Everybody run, run, run. Everybody scatter scatter. Police dey come, army dey come. Confusion everywhere.” The song reminds us of fear, the kind of immobilizing fear or terror that keeps one trapped or in bondage. This work is really dynamic, Christopher Panzani’s baritone sax right there going toe to toe musically with Shola, her voice one of the instruments. 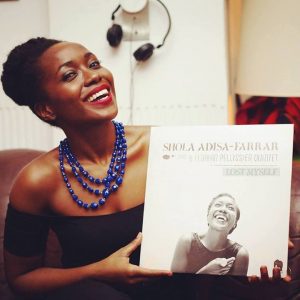 Whether singing, scatting, humming or holding onto a note long after the silences have returned to listen we see Shola’s knapsack full. She carries well the tradition of her elders, those singers or song stylists like Josephine Baker, Bessie Smith, Ruth Brown, Odetta, Marvis Staples, Nina Simone, Nancy Wilson, Eartha Kitt, Ella Fitzgerald, Etta James and many others.

In “Flow,” she tells us to “Flow like the river/Don’t you hold on too tight/Low like the valley/Let your pain be your light/Breathe deep … [and when] it feels like the world is falling down on me/let it go.”

Romantically sultry tunes like “Going Nowhere” are the kind of soundtrack perfect for cuddling under the covers, dancing between the sheets or in the kitchen as hunger calls sleepy heads from slumber on rainy Saturday afternoons. Shola’s voice is crisp and raspy – her genetic travels evident in her accent you might hear in the reggae-tone “What a Night.”

The other excellent musicians who round out Florian Pellissier’s Quintet are Olivier DeGabriele (bass) and Yoann Loustalot (trumpet). From “Evolution” to “Fall in Love,” the men are integral to the marvelous music. It doesn’t feel or sound like a studio recording. Shola is in every note. “Lost Myself” will have folks up dancing, tapping their feet or nodding their heads in agreement, especially when Shola sings of lineage: “Blue and red chords/white stars on blue/ build a world around them/ watch what they do,” America juxtaposed with Jamaica: “black and green chords yellow cross through/ harmony around dem/ hear what they do.” Why France, why not Britain, one might ask James Baldwin, Ta-nehisi Coates, Nina Simone, Josephine Baker – Shola Adisa Farrar.

“Spirit” floats up and out as the musicians play, Shola’s voice soaring overhead as if looking for landings, a place to touchdown, to take off … ‘cause, she says, “I lost myself.” Thoughtfully, the journey ends … at least for now, unless you buy tickets for both sets and or put the CD on continuous play. Now there’s an idea.