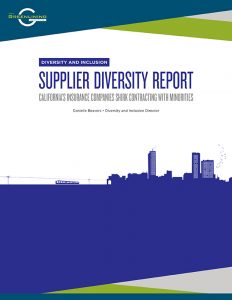 Oakland – In the most diverse state in America, the 10 largest insurers do shockingly little business with suppliers owned by people of color, according to a new report released March 13 by The Greenlining Institute. Insurers buy huge amounts of goods and services in California – over $23 billion in 2014 alone – but the largest firms did barely over 3 percent of their contracting with businesses owned by people of color.

“Insurance is a huge economic force in California, one that all of us have to deal with,” said Greenlining Institute Diversity and Inclusion Director Danielle Beavers. “That these companies do just 3 percent of their contracting with minority-owned businesses – in a state where people of color own nearly half of all businesses – is just pathetic.”

For Supplier Diversity Report: California’s Insurance Companies Shirk Contracting with Minorities, Greenlining reviewed reports filed with the state Department of Insurance for 2014 by the 10 largest insurers, including household names such as State Farm and GEICO. Key findings include:

We need to use our Black economic power

Do you know how Ida B. Wells has affected our lives?