On the second weekend of June this year, the San Francisco Black Film Festival will be celebrating its 19th year by screening over 100 independent Black films in this annual four-day cinema marathon. San Francisco Black Film Festival director Kali O’Ray, son of founder Ave Montague, sits down to discuss how it feels for the festival to celebrate its 19th birthday, the importance of indie films, remaining in a city that was once a lot more chocolate but has been gentrified to 3 percent Black – and more.

M.O.I. JR: How does it feel for the SF Black Film Festival to have the longest running Black film festival in Northern California? What is the importance of that?

Kali O’Ray: It is a great feeling and I am blessed to be a part of it. We’ve had the greatest independent films for the last 18 years, and our 19th year will be no different.

Every film is not going to make it to Hollywood or the theaters, and I am blessed to have a platform for those movies that will not. It is like having your finger on the pulse of what it means to be Black and the general consensus of the Black plight in real time. I love all movies and all movie genres, but nothing feels more right to me than Black cinema.

The importance of the SFBFF and all film festivals that feature Black film is it gives a voice to those who would otherwise be voiceless. Some of my favorites have come through the film festival circuit and I have also had the pleasure of watching filmmakers develop and master their craft. As I speak, I am dealing with the task of picking this year’s films and it is so hard because there are so many good films and messages I want to share.

It is like having your finger on the pulse of what it means to be Black and the general consensus of the Black plight in real time.

M.O.I. JR: What makes you remain committed to exposing people in Northern California and people who come specifically to the festival from all around the world to independent Black film?

Kali O’Ray: The commitment becomes second nature because of the passion that I have for what I am doing. There are many things I want to share, but the main objectives are to give a home to independent filmmakers and to also offer something that big screen wouldn’t dare: positive Black roles.

I must admit that last year was not a bad one for Black film in Hollywood, and I believe that was a push from the year before. I want to show that there is an audience for Black film and actors outside the spectrum we are used to, and many of these films offer great conversation and a platform to discuss many of the topics being presented. I enjoy meeting the filmmakers and discussing their films and seeing the pleasure of them seeing the pleasure on my face for their work.

M.O.I. JR: How do you deal with running a Black film festival in a city that in the recent past was nearly 20 percent Black but now is 3 percent Black? How has gentrification of the Fillmore and San Francisco affected the SF Black Film Festival?

Kali O’Ray: With no doubt gentrification has affected the festival. I mean, you are talking about a 90 percent depletion of my audience. That has been a struggle, but the adjustment has been to be inclusive of all in San Francisco.

What I mean by that is explaining that African American history is AMERICAN history and is as much a part of it as Christopher Columbus or George Washington. Those who just do not get what Blacks in America are going through only need to come and watch a couple of documentaries we offer.

Yes, it very important for a Black audience to see these films, but it is just as important for anyone who calls himself an American to see these as well. This is a place for discussion and healing with a great delivery system that anyone can enjoy. And yes, I practice what I preach and frequent the many film festivals that San Francisco, with its rich history, has to offer.

M.O.I. JR: How have Bay Area Black media and independent Black publicists and organizers contributed to the festival over the years?

Kali O’Ray: The outlets that are available usually will support and offer their resources for me to get the word out. But at the same time, there is not a plethora of media resources available in San Francisco that you can call Black.

I have to also reach out to those who “get it” to also get support, and sometimes these other resources depend on the “climate.” As your voice gets smaller, sometimes people just do not see the need, or calculations to make it so.

M.O.I. JR: Where can people go for more info?

Kali O’Ray: You can go to www.sfbff.org for more info as it becomes available. We are in the process of choosing our films, but starting May 1, things tend to move very fast! First come the official selections, next comes the schedule, then finally the tickets go on sale.

Kali O’Ray: We have left no legacy behind in the Fillmore 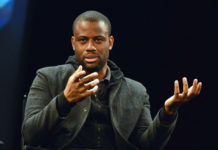