Mary L. Booker, a longtime associate of Bayview Opera House and civil rights advocate, passed away at Coming Home Hospice in San Francisco on May 11 of leukemia. She was 85.

A strong advocate for social justice, Booker used the theatrical arts to promote African-American culture and bring together community members from different generations. Members of Providence Baptist Church referred to her as “Mother Booker,” a name that followed her to the Bayview Opera House. She was known for her nurturing character.

After her funeral at Providence on May 16, hundreds of celebrants attended Booker’s homegoing at Bayview Opera House, emceed by board member Theodore Ellington.

Ellington praised Booker’s “intensity, her steadfastness and her passion for performing arts,” encouraging attendees “to preserve her legacy and ensure there’s a permanent fixture here at the Bayview Opera House.”

Although known as a nurturer, many spoke of her no-nonsense style of directing the actors who performed in her productions.

“She was the closest thing I had to a basketball coach,” said actor Walter Johnson. “She took to drama like a fish to water. You better know your lines when you’re dealing with Mother Booker and bring your A game.”

“She was the voice for the community, the voice of essence and reason,” said Michelle Batte, who was 12 years old when she first met Booker.

“She made sure that if you put your name on something, it was done in decent and order, and always on time,” said Batte. “She believed that you never half-ass do anything!”

Williams later graduated from San Francisco State University. “She believed in young people and encouraged us to stay off the streets by doing something creative and productive,” he said.

Playwright and director Bertron Bruno worked with Booker at Bayview Opera House since 1994. Engaging the community’s youth is “an uphill battle,” he said, but Booker took her mission seriously by using theater to give kids a sense of discipline and accomplishment.

Performing in a Booker production wasn’t just a test of acting talent, said Bruno. “It was more about how showing you’re good at something could influence the Bayview community.”

Booker’s initiative to create a better Bayview has been recognized throughout San Francisco. In 2007, she received the Unsung Hero award from the San Francisco Public Library.

“Ms. Booker carried the torch for the arts in Bayview Hunters Point and was an important part of the performing arts movement in San Francisco,” said Supervisor Malia Cohen, who also acknowledged Booker’s passing at the prior Board of Supervisors meeting.

“Her many words of encouragement and especially her intercessory prayers have shaped me into the person I am today,” said Howard. “She helped me soar.”

For those that knew, that knew her for the classes that you attend, well, she taught more than acting; she taught strangers to be friends.

She taught commitment by the way she lived. She taught it was not how much you took, but what you would give.

Yes, she was well versed in diction, movement and such, but her focus was on responding to the human touch.

She drilled and supplied instructions on poise on the stage, and she displayed it herself when her work brought no age.

You may have thought it was acting that she tried to instill. Did you ever notice it was strength and commitment and resolve of will?

You never notice the tears behind the brightness of her smile? You ever notice her courage, her fortitude as a mother to a child?

Did you ever feel the warmth of her protection when things went bad? Or the steel in her grip of softness extended to those that were sad?

Did you know the depths of this woman who inspired in the art the souls of woman and man, as she never forgot the touch of God’s salvation plan?

Oh, did you feel the truth in the poems she wrote? That spoke of her community, and I wish I could quote.

But it spoke of barriers to life and stood them all in a row. And it exposed them with the simple words stop and go.

Did you ever realize that she would finish at the very top of all of life’s endeavors, go and stop?

Bayview Hunters Point native Meaghan Mitchell covers her hood and others for Hoodline, where this story first appeared. Contact her at @meaghan_m on Twitter or by email at meaghan@hoodline.com. 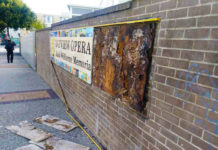 Dare to dream – at the Bayview Opera House!