One of my favorite feature films in the San Francisco Black Film Festival is a futuristic film called “90 Minutes of the Fever.” The film is about a family who has to deal with a major computer virus, martial law and the ramifications that these catastrophes have on personal relationships within a family.

It is a funny story about endurance, patience, acceptance, unconditional love and more. I talked to filmmaker Joan Carlson about her career in film as well as her power work of cinema art. Check her out in her own words.

M.O.I. JR: When did you know that you wanted to be a filmmaker?

Joan Carlson: I’ve always had a love for movies from an early age. Being raised by a single mother with two younger twin sisters, the TV was a big babysitter in our home, and I was just always drawn to the classics, which played back then year after year. It was like an early free education in film theory watching movies then –  “Gone With the Wind” … “Lawrence of Arabia” … “Dr. Zhivago” … “Apocalypse Now” … “Spartacus.” I loved the scale and the depth of story even back then.

M.O.I. JR: What inspired you to make 90 Minutes of Fever?

Joan Carlson: Desperation and passion. I wrote my first screenplay in ’97, a re-telling of “Hamlet” set in the Black underworld. It was like a dream: It made the quarterfinals of Sundance’s Screenwriting Lab, traveled throughout New Line Cinema, got notes from the studios; it looked as if a deal was inevitable.

It never got bought, but the fire was lit – 14 screenplays and 20 years later with my fair share of coming so close to a deal. Stories I had to do, like what all filmmakers have to do, is get something made, and it better be good.

M.O.I. JR: Where did you learn how to layer your story like that? I thought it was interesting how you juxtaposed the family’s internal issues alongside martial law.

Joan Carlson: Really years of writing and rewriting. That’s where you really learn how to write. Also studying the craft of writing. Every second you have to think, “What reveals character? Conflict?”

“90 Minutes of the Fever” is about a family confessing all of their long-held secrets, trapped in a house as the end of the world approaches. What happens to families over time, we stop talking, we pass by each other saying our daily social norms, too wrapped up in our own world to care about what’s going on in someone else’s.

Martial law has been declared, the computer virus that has taken over all forms of electronic communication, including the internet, is just a roadblock. Now all of the family’s distractions that keep them from talking to one another are gone, and they are forced to listen to each other.

M.O.I. JR: Who are some of the films and filmmakers that have inspired your work?

M.O.I. JR: What does the future hold for this film? Where will it be screening after the San Francisco Black Film Fest?

Joan Carlson: The film plays next in the Black Harvest Chicago Film Festival at the Gene Siskel Film Center in August 2017. We are actively seeking a distributor but plan on releasing the film later this year after our festival run in September 2017. You gotta stick with your plan and believe.

M.O.I. JR: What is the ultimate message that you are trying to convey with the film?

Joan Carlson: The ultimate message is: Life is too short, so enjoy it with the people you love, every minute, every second. Don’t let life live you. You live life.

M.O.I. JR: I see that you are the director and writer of the film. Do you see that as being a good thing because you can see your vision through or is it a bad thing because sometimes new blood is needed to bring new ideas to a project?

Joan Carlson: I think it depends on the artist. As a writer-director, just to see how the timing of the film fits the current state of angst and uncertainty we’re experiencing as a nation is so surreal. The movie dials into the hysteria of fake news, alternate facts, unknown hackers and the lurking threat of martial law at the next terrorist incident. Any time you can capture the current vibe you’re during your job.

For me I knew what I wanted to see and feel. I don’t think I have to direct everything I write but certain things that are clear I think you got to go with your gut. I love the process and thrive off of fresh ideas from the crew and actors. I like an environment where creativity is welcomed.

M.O.I. JR: Did you know that you wanted to cast Glenn Plummer as your lead character? How did you cast for this film?

Joan Carlson: You know the interesting part of making a film is how it comes together. Glenn has always been who I had seen playing the lead. There was a time I didn’t think I would be able to get him and started in another direction. Then when that didn’t work out and the opportunity presented itself I went for it.

Glenn is a great actor that people like and remember his work, but he doesn’t always get the recognition he deserves as a great actor. I am so grateful for what he brought to the film. He set the bar for the rest of the other actors, and he was so gracious and giving. It was a blast working with Mr. Plummer.

M.O.I. JR: How did you feel when you were selected to screen at the SF Black Film Fest?

Joan Carlson: I was so honored and pleased to be included in this year’s selection. SFBFF – the festival has a rich culture and history. I love the films they promote. This game is so tough and the acknowledgement of your work, being included and seen and shared, is just a blessing in itself.

M.O.I. JR: How do people stay online with you and your work?

Joan Carlson: The easiest way is our website: www.90minutesofthefever.com. I truly thank you for your time given to reflect on the movie. 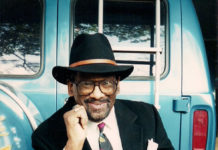