by Philip A. Bassett

In these days of tremendous change and social upheaval, it’s good to know that a man of impeccable integrity is back in the public arena. After two and a half years in various Michigan prisons, Rev. Edward Pinkney has returned to his home in Benton Harbor, Mich. A bulldog for social justice, the reverend, who turns 69 this year, shows no sign of slowing.

His wife, Dorothy, had hoped to put him on “lockdown” for at least a week to ease his adjustment to life out of prison, but he left me a voice mail just five days after his release and the next day he attended a public event in his honor in Ann Arbor. I caught up with him the following day and he spoke about how he coped with being locked up.

“There is drama every day in prison,” he told me. “Even among friends.” He said there were more than a few times where he was on the phone with Dorothy and a fight would break out somewhere nearby.

For some reason, his first placement after the customary quarantine at Jackson Prison was in a high-security facility in Coldwater, Mich. He humorously describes his roommate situation there as “four killers and me” and says it distressed him that much of their conversation centered on bragging about murders they had committed.

His next move to a prison in Marquette, Mich., was like jumping out of the frying pan into the fire. At Marquette, he says, the atmosphere was so hostile and the guards so aggressive he had to press himself “flat against the wall” to avoid touching the guard when he came down the hall – a sure assault charge.

It was here, too, that he was accused of “smoogling” because a friend had interviewed him and was leaving with some notes. The guard’s spelling error helped the reverend win the case, but his phone privileges were revoked for six months anyway. The sentence was doubly harsh because he was now nearly 500 miles away from his wife, with no hope for a visit.

After two and a half years in various Michigan prisons, Rev. Edward Pinkney has returned to his home in Benton Harbor, Mich. A bulldog for social justice, the reverend, who turns 69 this year, shows no sign of slowing.

Luckily, a few activists in the area became aware of his plight and started to visit him regularly. That the reverend had any support in this all-white community far from his home was probably a surprise to the authorities there.

After some time, he was moved again, this time to a facility in Muskegon, Mich. Here things were more relaxed, he says, and, after they got to know him, even he and the guards seemed to get along. On top of that, he was now only a two-hour drive away from Dorothy.

Nonetheless, even here there was a situation that was irritating. Television viewing is first come, first served and he found himself in competition with inmates who liked to listen to rap, while he preferred religious programs. The way he worked through the conflict, strangely enough, was by offering to teach basic math skills.

A class of one grew to 16, and by that time there was no longer any competition. In fact, they began watching out for the reverend and giving him his preference, even when he arrived late to the TV room.

There were other, more mundane complaints, probably familiar to most inmates: rotten, disgusting, worm-ridden food, so bad his wife had to send care packages so he could fix one meal a day; a moldy room that made him so ill he couldn’t get out of bed for two weeks; a fall off the top bunk that injured his shoulder enough that it still hurts two years later. The latter incident happened because the only way to get down from the bed was a rickety stool that toppled easily.

Despite these challenges and more, Rev. Pinkney appears to have emerged with his character intact, though he vows that moving forward, he’ll be “doing things differently.” For now, he is planning a protest in his town of Benton Harbor on July 11 and is attending a dinner and fundraiser in his honor on July 8 in Detroit. Both of these events can be referenced at bhbanco.org and anyone who is planning to be in the area on either of those days is encouraged to participate.

For those abreast of social issues, supporting Pinkney is a no-brainer, but if you’re attending one of his events for the first time it’s easy to miss the essence of the man. Since he is a Baptist preacher, Rev. Pinkney tends to speak in that style, repeating sentences he feels are important. That doesn’t appeal to everybody.

He sometimes humorously puts himself in the place of his oppressors to make a point and ends up talking about himself in the third person, which could sound egotistical to some. He jokes constantly with his audience, which might seem disrespectful or give the impression that he takes these things lightly. He has a very direct manner, which some could find off-putting, and he possesses an unearthly amount of confidence.

For those abreast of social issues, supporting Pinkney is a no-brainer.

However, those who take a closer look soon discover a deeply spiritual man with a wicked sense of humor and the manners of a Boy Scout, who treats his persecutors more like peers than adversaries and is not afraid of a political fight. And his confidence is not the fickle kind. Planted early and fed by countless successes, it is the confidence of a man who is consistently faithful to the promptings of his heart.

As a fighter for justice, Rev. Pinkney brings many gifts to the table. He has the discipline of a Gandhi and a nose for networking and politics. But the greatest gift he brings is his own patented brand of love – the strongest kind of love – the kind that can pierce prison walls and touch the hardest men’s hearts, even prison guards, and make anyone within range more hopeful, confident and willing to work together.

Philip A. Bassett is the author of “Soldier of Truth: The Trials of Rev. Edward Pinkney.” He can be reached at philliamb@outlook.com. 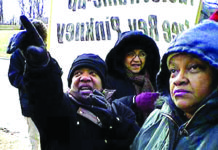 My husband, the Rev. Edward Pinkney, is still sitting in the Berrien County Jail