When Joe Louis knocked out Max Schmeling via TKO 124 seconds into the first round of their legendary re-match, it was June 22, 1938, in a sold out Yankee Stadium arena. Seventy million people listened in on their radios.

He was the heavyweight champion of the world and a hero in Afrikan communities.

Public television was barely two years old, the U.S. was on the brink of World War II and Hitler’s Germany had feted Schmeling as a Nazi hero and as Europe’s perfect specimen of Aryan superiority to defeat the Afrikan from the U.S.

Seventy-nine years less five days later, Andre Ward knocked out Sergey Kovalev via TKO 129 seconds into the eighth round of their legendary rematch. It was June 17, 2017, in the Mandalay Bay Event Center in Las Vegas, Nevada, before 10,592 fans and distributed live by HBO.

Andre Ward is a two-division world champion. He is the reigning unified WBA, WBO, IBF and RING Magazine Light Heavyweight World Champion, the 2004 Olympic Gold Medalist and the best pound for pound fighter in the world. His fans love him. His star is still rising in global Afrikan communities.

Racial tensions in this country have accelerated, mirrored and surpassed those of pre-WWII 1938.

Meanwhile, Kovalev continued his historic architecture of nasty racist social media attacks against Afrikan opponents throughout the build up to the second fight. Andre Ward spoke out against Kovalev’s racism. “He’s culturally sound enough to know some of the things he’s been doing are racially motivated,” Ward said. “He needs to be silenced.”

Mr. Ward should know. He was Kovalev’s prime target for nearly a year.

Andre Ward knocked out Sergey Kovalev via TKO 129 seconds into the eighth round of their legendary rematch.

Kovalev should have spent more time training. For on June 17, 2017, Andre Ward dismantled the racist machine called Sergey Kovalev, letting it be known – again – that Kovalev’s actions do not belong in any sport, anywhere.

In retaliation for her fighter’s second loss to Andre Ward in seven months, Main Event Boxing CEO Kathy Duva announced her intention to file a protest with the Nevada State Athletic Commission, seeking to have Andre Ward disqualified.

In Duva’s spectacular rant at the post fight press conference, she described Ward’s body shots as being “below the belt” and said center referee Tony Weeks shouldn’t have stopped the fight.

But which should come first, Kathy: The “disqualification” plea to the Nevada State Athletic Commission, the Instagram apology posted by your fighter after the fight, or the multitudes of newspaper reports of an impending official protest?

I invite my readers first to listen to the words of veteran trainer Virgil Hunter.

Next, view the following videos of the eighth round of the Ward – Kovalev fight by Boxing Doc and by Fannon International Boxing Channel, “Andre Ward vs Sergey Kovalev Stadium View/Round 8 Highlights.” There are no low blows. All punches were at the belt line.

Stevie Wonder could have seen that Kovalev was in no shape to continue, nor did he show any desire to do so. His body language indicated that he was broken mentally and physically. He wanted no more of Andre Ward in this lifetime.

Team Kovalev should thank the perspicacity of Tony Weeks for stopping the fight when he did.

Kovalev’s tantrums and excuses over the past year, the loss of two major boxing matches seven months apart, Duva’s performance at the post fight press conference, and Kovalev’s Instagram “apology” seem like red herrings sprinkled along the road to an official complaint to the Nevada State Athletic Commission.

Stevie Wonder could have seen that Kovalev was in no shape to continue, nor did he show any desire to do so. His body language indicated that he was broken mentally and physically.

He has a history of racism and excuses that cannot be cleaned up with a fake Instagram “apology.” Threatening Afrikan opponents – and by default, their families – with racial invective and physical harm is precisely what should not be done to a people who have suffered 600 years of a Holocaust that has not abated.

Threats to “destroy Ward as a man” come from the mouth of a racist, not a serious athletic competitor. This particular racist described Donald J. Trump as “a nice guy” on Fox TV, while complaining about his first loss to Andre Ward.

Kovalev openly let it be known that he had no respect at all for Andre Ward, nor an Afrikan person.

He is dangerously sick, trying to spit in your eye and call it rain, and if you don’t believe him, he’ll take his marbles and go home.

Obviously the two fighters don’t like each other. This is not difficult to understand given that one is a racist bully and the other is the two weight unified light heavyweight champion and pound for pound the best fighter in the world, who has beaten a racist bully twice, and who hasn’t lost a fight in 20 years.

But there are so many things that go into a fight: the fighters’ skills, the fighters’ activity when they’re at the top of their game, the character of the man or woman, good coaching and training advice – all of these things and more go into the making of a good fighter. And ultimately, the proof is in the fights.

Ward got inside Kovalev’s head in 2016, set up camp and didn’t leave until the end of the re-match in 2017. In fact, the beginning of the rematch was like Round 13.

Kovalev was tired midway through the third round of the rematch. By the fifth round he was breathing through his mouth.

Throughout the fight, Kovalev’s stances were unstable. He had to be warned more than once about his grappling and holding, most of which was prevented by the center referee. He repeatedly threw punches that missed. He carried his arms low. He worried about Ward’s left hand.

That might explain why Kovalev couldn’t stop Ward’s left hand, and why he didn’t see the right cross to the chin that nearly knocked him out cold in the eighth round.

Ward got inside Kovalev’s head in 2016, set up camp and didn’t leave until the end of the re-match in 2017. In fact, the beginning of the rematch was like Round 13.

Kovalev threw a lot of rabbit punches. He didn’t use his feet effectively. On those rare occasions when he landed punches, they were not in combinations. He was up on his toes a lot, and he was constantly fighting his way out of corners. Between rounds, his hands were outstretched on the ropes as he sat, indicative of being tired.

Ward on the other hand fought a mainly defensive fight, until he unwound an offense reminiscent of Muhammad Ali’s Oct. 30, 1974, Rumble in the Jungle with a modified Andre Ward version of Ali’s rope-a-dope – from the center of the ring.

Recall that in the Rumble, Ali let George Foreman tire himself out for seven rounds, then in the eighth, unleashed a barrage of punches that put Foreman on the canvas.

Ward’s offense in the eighth round of the re-match began when he nearly floored Kovalev with a right cross. Kovalev didn’t see the punch coming. Ward then went mostly to the body until Kovalev folded.

Kovalev could do nothing about Ward’s offense, one that had Kovalev sitting on the ropes before Tony Weeks stopped the fight.

Ward’s economy of punches was accurate: less was more. Kovalev threw more punches but was less effective. Ward’s conditioning was superb as always, and he controlled the ring.

What else is to be said?

Both fighters handle themselves very differently – outside and inside the ring.

Ward fought a mainly defensive fight, until he unwound an offense reminiscent of Muhammad Ali’s Oct. 30, 1974, Rumble in the Jungle with a modified Andre Ward version of Ali’s rope-a-dope – from the center of the ring.

Team Ward has been together since his childhood.

But is Team Kovalev really a team? Their coach, John David Jackson, made overtures about leaving, citing unprofessional treatment and nastiness on the part of Kovalev.

Given that Mr. Jackson is Afrikan, one wonders how he continues to coach a racist fighter.

Well, the world saw Andre Ward dominate, inside and outside the ring, and retain his World Boxing Association, International Boxing Federation, World Boxing Organization and vacated RING boxing belts. Andre Ward is also up for an ESPY Award, in the Best Fighter category. Voting continues through July 12, 2017.

The world saw Sergey Kovalev fold after being hit – repeatedly – above the belt!

Champions in my books exhibit the kind of sportsmanship, athleticism and savvy inside and outside the ring that mark them as competitors who are at the top of their game.

Thankfully referee Tony Weeks, didn’t allow much holding to happen, like the referee in the previous fight did.

Kovalev tried to slip it in during the later rounds, but it was too late. I spoke on that in my previous article and I was looking to see if it would happen again this time. It didn’t. Not as much.

Thank you, Andre Ward, for winning this fight, and for being on top of your game.

Thank you, Jack Johnson, John Lewis, Muhammad Ali and others who have come before.

Thank you, all of the Black women who box.

Thank you, Tony Weeks, for stopping the fight before it became a truly ugly fight.

Thank you, all of the great ones.

Malaika H Kambon is a freelance, multi-award winning photojournalist, owner of People’s Eye Photography. She is also an Amateur Athletic Union (AAU) state and national champion in Tae Kwon Do from 2007-2012. She can be reached at malaikakambon@gmail.com. 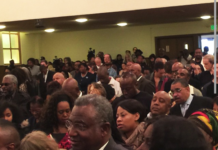