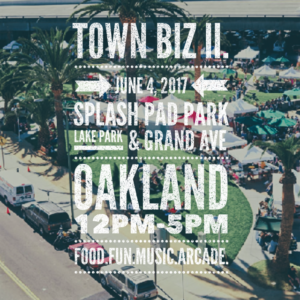 Kyle Wiggins started Wiggins Consulting to help businesses grow and refine their products and services. For years, he had been advising people on different tactics and strategies that they could employ to get from point A to point B, but these advisements happened randomly through casual conversations and chance encounters. Desiring to be more strategic and supportive in a targeted fashion, he created TownBiz, a platform for expression where both budding and established businesses could showcase their goods while networking with like-minded entrepreneurs.

TownBiz is a free trade market, serving as a launching pad for vendors, many of whom have yet to secure an established place of their own to display their work. The “where” of TownBiz was just as important as the “what” to Kyle. The first event took place in December of 2016 at Henry J. Kaiser Convention Center in Oakland. TownBiz II is right around the corner on June 4, 2017, and will be held at Splash Pad Park in Oakland’s historic Grand Lake neighborhood.

Wiggins Consulting’s primary objective for these events is to create positive awareness and exposure for businesses in and around the Bay Area. “People who only thought of Oakland negatively in the past have begun to embrace the city and see the good here. The problem is that it’s only happening in concentrated areas. Corporate “bros” and yuppies may frequent Oracle Arena for Warriors’ games, but many head back to San Francisco, Dublin, Walnut Creek and other neighboring communities once the games end. I believe it takes a strong effort from long-standing Oakland residents to create lasting change in the areas that need revitalizing most,” Kyle shared.

Born and raised in the city, Kyle witnessed first-hand how easily people succumbed to some of the crippling vices around them, similar to many urban communities in America. It was obvious to him that young African-American males were some of the most susceptible to delve in risky behaviors. The system was tailored to entrap them and led to cyclical patterns of failure and hopelessness. These tragedies were often repeated throughout the duration of their lives, only to be passed on to the next generation, strengthening those oppressive bonds.

Kyle wanted to do something to change that. “Initially I was proud to just navigate around these various pitfalls for myself. As I continued to mature as an adult, my focus and perspective broadened beyond just what I could accomplish and provide for myself and my family. I started to think about how I could give back to my city. Out of that desire, I started my own consulting firm and shortly afterwards, TownBiz was created.”

On June 4, 2017, TownBiz II will embody the pulse of the city and provide opportunities for emerging businesses to be seen and heard, all while combating some of the ills that displacement has wrought. These efforts should not only help small businesses grow, but the city of Oakland and its residents as well.

Journalist Adam Allred can be reached at allredwriting@gmail.com.