On Oct. 27, 2018, a group of homeless people moved to a vacant city-owned lot in East Oakland. They named this encampment “Housing and Dignity Village”; it was a drug-free site for sober, unsheltered women and their families.

But on Nov. 7, 2018, the city posted a 72-hour notice for them to leave. On Nov. 9, 2018, Housing and Dignity Village sued the city asking that they not be evicted from the site. Their case was called Miralle v. City of Oakland.

The city claimed that it could offer new shelter to the people in the village. The City also argued that no homeless people would be criminalized in the eviction process. On Nov. 28, 2018, the court ruled in favor of the city and allowed the city to evict the people from Housing and Dignity Village – but the City had to find shelter for everyone displaced. The court gave no physical requirements for the shelter or direction for whether the shelter was to be overnight or longer term.

The city claimed that it could offer new shelter to the people in the village. The City also argued that no homeless people would be criminalized in the eviction process.

On Dec. 6, 2018, the City of Oakland demolished the encampment. In a press release, City Administrator Sabrina Landreth seemed to gloat: “Judge Gilliam’s order affirms the compassionate, careful approach we take toward addressing the homeless crisis.”

“It is outrageous that the city destroyed this community,” said Joshua Piovia-Scott, attorney for Housing and Dignity Village. “This will do nothing to address the crisis of homelessness that we are experiencing.”

The city won, in part, by misleading the court. Judge Haywood S. Gilliam Jr., wrote: “The city has represented that any encampment closure will be conducted in accordance with its Standard Operating Procedure, which, along with certain notice requirements discussed below, includes an offer of shelter beds and resources to individuals at the encampment prior and during the closure.”

Judge Gilliam wrongly believes that every person evicted from an encampment has been offered a shelter bed. In fact, the Standard Operating Procedure (actually called Encampment Management Policy, or “EMP”) states:

“Prior to reaching any decision to close an encampment, the EMT [Encampment Management Team] will consider the availability of alternate safer locations or other housing or shelter opportunities for the occupants of that encampment. Should shelter or other housing be available, it will be communicated to the occupants by the City’s contracted Street Outreach provider in advance of the closure. The availability of shelter will be a significant, but not dispositive, factor in determining whether to close an encampment.”

In other words, before an encampment’s closure, the city looks at the shelter availability. If shelter space is available, Operation Dignity, the Street Outreach, will inform the people at the encampment.

But often times, the people being evicted find it very difficult to reach Operation Dignity. They often are not on-site on the day of an eviction.

Even if the city does not find enough shelter space, they might still decide to close the encampment. An evicted person would simply have to find another place to go.

Lillian Russell and Shawn Wash are two unhoused people who were evicted from an encampment, and not offered shelter by the city. They lived in the Jefferson Park encampment, which was recently cleared by the city. 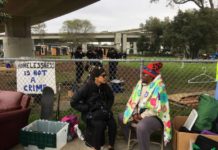 What businesses should know about being homeless