News & Views Where are the police in the murder investigation of Humboldt State student...
Facebook
Twitter
Email

It has been two months since the murder of David Josiah Lawson, a Humboldt State student who was stabbed at an off-campus party Easter weekend.

Lawson was a 19-year old sophomore at HSU from Perris, California, in Riverside County.

Police arrested 23-year-old Kyle Zoellner at the scene. According to an article published in a local paper, the Mad River Union: “The probable-cause notes submitted to the court by Arcata Police Detective Sgt. Todd Dockweiler state that Zoellner took part in the fight that allegedly led to the sophomore student’s death. Dockweiler also recorded, ‘Numerous witnesses had detained Zoellner and indicated he had stabbed the victim.’”

Zoellner was called to the party by his girlfriend, Lila Ortega, who was upset over her missing iPhone 7. Three female friends accompanied Ortega to the party that night.

After five days of preliminary hearings and 17 witness testimonies, Eureka Judge Dale Reinholtsen released Zoellner due to a lack of physical evidence.

Evidence presented included a knife found at the scene with a fingerprint not matching Zoellner’s. The fingerprint was tested locally then sent off to the Department of Justice for further examination.

Frustrations have been expressed over the lack of transparency from the Arcata Police Department in updating the public as well as Lawson’s family on where they are in the investigation. 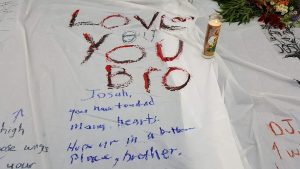 It has been over a month since the release of Zoellner and no one is currently being held to answer for Lawson’s murder.

Arcata Police Chief Tom Chapman is only willing to say publicly that the investigation is ongoing.

What is viewed as APD’s lack of transparency can be attributed to the fine line police departments have to walk during murder investigations.

It is the Police Department’s duty to make the public feel safe and assured when someone is killed and no one is in custody. It is extremely difficult, however, trying to keep the public updated, while not revealing information publicly that could compromise the investigation.

Lawson’s mother and family members feel a sense of powerlessness as they are forced to wait for answers from a department that has been publicly accused of racial bias and negligence in Lawson’s murder.

“We are in disbelief and hurt. We do not get to grieve for DJ. Every day it is still pretty fresh because we have to work on getting someone in jail before we can start the grieving process,” said Ameera Acuna. Acuna is Lawson’s aunt and his mother’s sister.

“I’m sure the police are actually working, trying to get this guy convicted, but they don’t feel as much pressure because none of us live there,” Acuna added. 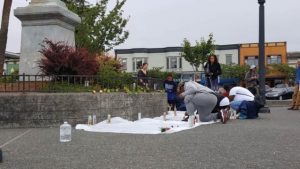 At the Arcata City Council meeting Wednesday, June 7, 2017, Arcata PD Chief Chapman stated two outside investigators have been brought in to assist with the investigation, but they have requested to not be publicly named. He also said that their request is not uncommon.

An online petition has been started requesting that Lawson’s murder investigation be taken over by the California Department of Justice. The petition notes negligence and incompetence by APD and their failure to adequately secure the crime scene.

Zoellner’s car was parked in the driveway where Josiah was killed, yet his car was allowed to be driven from the scene of the crime. The car held a bag of chef knives that Zoellner used for his job as a chef at Uniquely Yours Catering.

Chapman was asked his thoughts on the police’s failure to enter Zoellner’s car into evidence at the scene of the crime. “It is easy for us to ask these questions because we have the benefit of knowing everything in hindsight. That connection wasn’t made at the time,” Chapman replied.

In noting the online petition, Chapman discussed how the DOJ will not come in until all local resources have been exhausted. He also mentioned he knows that there is a lack of trust and confidence in the Arcata Police Department.

Chapman understands the DOJ will offer credibility because they are an outside organization not connected to APD, but he expressed they are not a huge organization with infinite resources. 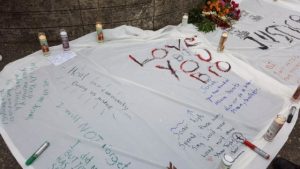 Chapman assured the public at the June 7, 2017, city council meeting that request has been made for investigative support and that the investigation is active and ongoing.

At the meeting Chapman also mentioned that he has been in contact with Lawson’s mother regularly and has tried to keep her updated as best he can. The problem lies in the fact that specific details of an investigation are not public knowledge.

He included that the DOJ has been active in the investigation “since day one,” offering forensic expertise.

“DOJ involvement will not evolve until local resources have been exhausted, meaning our sister agencies. We have established a team with the District Attorney’s Office, the Eureka Police Department, the Sheriff’s Office and the University Police Department. We are reviewing, analyzing and identifying any additional steps that need to be taken, that should be taken and doing critical analysis,” Chapman stated at the city council meeting.

Lawson’s mother reached out to Chief Chapman June 13, 2017. She was told that he was out of town, so she reached out to Eureka PD police chief Andrew Mills.

“I reached out to Chief Mills to get information relating to my son’s murder. The 15th marked two months and I needed to know where they were in the investigation and what was going on,” said Charmaine Michelle Lawson.

“After speaking with Chief Mills, I learned EPD was not actively involved in the investigation. I was told by Chief Mills that he was willing to send over two of his homicide detectives and offer any assistance that is needed but Chief Chapman would have to accept the offer,” she continued. 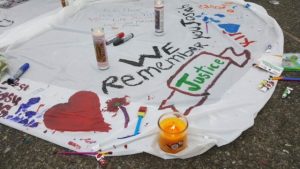 With HSU students scheduled to return to school in August, it is imperative that APD is able to gather enough evidence to arrest someone for Lawson’s murder.

Zoellner himself has not been completely ruled out as a suspect. His bloody jeans have been sent off to the DOJ for testing and APD is currently waiting for the test results.

Damning testimony from Perris Wright should not be ignored as well.

Wright testified that he saw Zoellner and Lawson on the ground with Zoellner’s body lying on top of Lawson’s. Lawson had Zoellner in a headlock and was squeezing so hard, Wright thought that Lawson was “going to kill him.”

When Wright finally got Lawson to release his grip, Zoellner rolled to the side and Wright said he saw blood and a stab wound on Lawson.

In an interview given to local media, attorney for the Lawson family Justin Sanders said that he believes the judge held Zoellner to a different standard of probable cause.

Concerns have been raised over Lawson’s murder becoming another cold case, which happened before in Humboldt County with the 2001 murder of HSU student Corey Clark.

City of Arcata Mayor Susan Ornelas is confident this will not happen. “Josiah is not being forgotten. I at one point was pestering Chief Chapman until I realized I had to give him some space and allow him to do his job. We will not rest until this is solved because people and the community are unable to heal and have closure.”