Our children are our future. We must nurture them, protect them, give them the tools necessary to survive in this harsh and unforgiving world. What if I told you that the very system designated to care for and safeguard abused and neglected children is in gross and willful negligence of its role as “protector of innocence?”

Why would Child Protective Services, or CPS, remove children from parental custody that have not been abused or neglected? The answer is simple and incredibly sad: financial incentives. For Title IV-E federal funding alone, San Francisco gets roughly $1.5 billion per year. This is in addition to Title IV-D federal funding and funding from the Fostering Connections to Success Act, which incentivizes adoption.

There are strict terms and conditions intended to protect children from unnecessary removals and to protect the American taxpayers from fraud. However, there is hardly any oversight or enforcement of the state and federal guidelines and laws designed to ensure that children’s rights are upheld. Further impacting the abuses are the rules of confidentiality that serve to shield CPS and dependency courts from scrutiny.

Children who have been legitimately removed from bad situations often have histories of chronic and complex trauma that contribute to adverse mental health outcomes. Further complicating their emotional and mental well-being is the devastating sense of loss and loneliness all children – even those who have been abused and neglected – feel when being separated from their families.

For these reasons, the transition into foster care is never easy. Consider, then, that many children entering into foster care are re-traumatized: abused and neglected by the very people who are supposedly “saving” them?

According to the Children’s Bureau, somewhere around 1 percent of foster children nationwide are abused in foster care. However, these numbers are self-reported by child welfare agencies and the statistic is so incredibly low it is evidence of gross underreporting or non-existent reporting. Actual accounts from former foster youth tell a drastically different story.

The transition into foster care is never easy. Consider, then, that many children entering into foster care are re-traumatized: abused and neglected by the very people who are supposedly “saving” them?

Lillian “Monique” Williams and Shafari Harris, born four years apart, are sisters and victims of the foster care system. The circumstances leading up to their removals represent traumas children never should endure. What happened after CPS intervention was even worse.

The sisters’ mother was a drug addict with criminal inclinations. The older sister, Shafari, landed in foster care after a series of unfortunate events following their mother’s arrest for shoplifting.

Lillian remained in their mother’s custody only to be poly-victimized years later. For three days straight, Lillian watched as her mother’s boyfriend continuously beat her mother. He took regular breaks to molest Lillian, who was 11 years old at the time.

Lillian recalls with vivid accuracy being called to the principal’s office. She remembers walking down the hall in fear, certain she had done something naughty. When the principal reached out to her, with the sincerest intentions, Lillian truly believed things would get better. She was wrong.

After spending two years in a home with foster parents who made no efforts to comfort or love her – this girl who had arrived in their lives damaged from the molestation, abuse and domestic violence – Lillian was gangraped at knifepoint by a local turf-crew at the age of 13. “I thought it was all over for me,” she said. “Like my horrible life was coming to a horrible end. I felt like a nothing, a nobody, a disgusting piece of trash that could be thrown out at any time.”

The foster parents did nothing to defend or soothe the child who, for the second time in her life, had been the victim of violent sexual assault. They did, however, send her away to live in a group home.

Lillian “Monique” Williams and Shafari Harris, born four years apart, are sisters and victims of the foster care system. The circumstances leading up to their removals represent traumas children never should endure. What happened after CPS intervention was even worse.

Meanwhile, Lillian’s older sister, Shafari, had been molested in her foster home at the age of 9 by her 23-year-old foster brother. “He used to come into our room every night, taking turns with me and the other foster girl. All I remember is him grabbing me, pushing me … I would put my head in the blanket, saying ‘no, no, no,’” Shafari said. “I felt like a toilet that was tired of being shit and pissed on, that anyone could do anything to me and I could do nothing about it.”

Shafari was rescued from that situation at the age of 12, only to be revictimized by an 18-year-old who impregnated her. Although she was just a child, she has lived with the perceived shame of being “fast” her entire life.

The two sisters speak of the mental anguish and bleeding hearts that have followed them into adulthood. They ask themselves questions that have no answers. They reach deep within to find the strength, courage and wisdom to go on, to love, to live.

Lillian has joined Parents Against CPS Corruption, or PACC, to fight for other children who have been neglected and abused by the foster care system. PACC continues to work towards greater oversight and accountability, due process, equal protection under the law, and increased efforts towards kinship placement and timely reunification.

Lillian has joined Parents Against CPS Corruption, or PACC, to fight for other children who have been neglected and abused by the foster care system.

PACC is encouraging people to continue calling the SFPD fraud unit at 415-553-1521 and the SF District Attorney’s Office at 415-553-1751 to urge them to investigate and prosecute, to the fullest extent of the law, crimes committed by CPS workers against parents in the process of removing children from parental custody. Social workers do not have immunity for violating penal codes and absolutely must be held accountable.

Michelle D. Chan, co-founder of Parents Against CPS Corruption, can be reached at California_Rise@outlook.com or on Twitter, @protestcps. 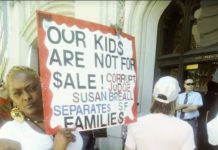