The following is what we believe to be just and fair and reasonable requests considering the inhumane treatment that many of the prisoners were being subjected to while housed in solitary confinement, or isolation, for decades, especially at Pelican Bay State Prison and Corcoran State Prison.

The Amerikan judicial system strongly believes in full restoration to those who have been victimized unjustly, and being in prison does not negate the rights of prisoners to receive restitution from a system that committed crimes under the manufactured cloak of combating prison gangs. Via the Ashker v. Governor settlement, the prisoner class proved their case beyond a reasonable doubt. Even the judge in this matter strongly recommended that the governor and CDCR settle this matter out of court. We, the people, are 100 percent in support of the following request for institutional restitution:

1.  While spending decades in SHU in solitary confinement, or isolation, we were not allowed to participate in a number of educational, vocational and/or self-help programs, and as a direct result, many of us have been unable to meet the criteria for parole suitability – not as part of Prop. 57. We are asking that CDCR override our points and send us to either a Level I, II or III institution, where many of these programs are available, thereby providing us with the opportunity to prepare ourselves for the Board of Parole Hearings.

2.  Many of us, while in the SHU, received a number of questionable RVRs (disciplinary reports) for allegedly engaging in gang activity. We are seeking full credit restoration. Of course, this will be a case-by-case application. (Note: This request is not part of Prop. 57.) This is solely part of our request for restoration, regarding those RVRs we received for allegedly participating in gang activity.

3.  The CDCR has identified at least 28 prisoners who had served 30 years or more in solitary confinement, or isolation, in SHU. One such prisoner was Hugo Yogi Pinell, aka Dhariki Kambon. He was murdered within months of his release from SHU.

CDCr just released us into general population, without any consideration for the damage they have caused us, and then treated us like any other prisoner, and we are not just any other prisoner. We are rare and unique, in that we have just served 30 years or more in solitary confinement.

We are requesting that those prisoners who have been subjected to both psychological and physical torture, which includes sensory deprivation, should be provided the option to be placed in an environment that would facilitate their healing, such as San Quentin State Prison. This will be part of their institutional restitution!

4.  The 28 prisoners who served 30 years or more in solitary confinement should be given a parole date, for they meet the state and federal low-risk assessment. For example, a) they are above the age of 50, and b) they have served over 30 years of imprisonment. Their release would pose no threat to society, according to your own data base! 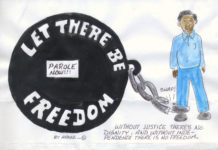