Racists want Charlottesville terror here – It’s up to us to stop it! Assemble on Scott Street in Marina Green on Saturday, Aug. 26, 10 a.m.

by Anthony Leviege and Jack Heyman

We longshore workers support the call to action for our union to take the lead for the working class, to stop a deadly threat to the rights and the lives of us all. 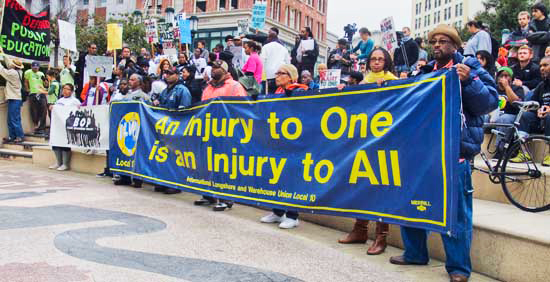 This weekend, fascist groups plan to stage rallies that threaten to repeat the racist terror of Charlottesville in the Bay Area. We’ve shut down the port against racism, war and police repression. Longshore workers have got the power, and we will not allow labor-hating white supremacists to bring their lynch mob terror here.

On Saturday, Aug. 26, at 10 a.m., we will assemble on Scott Street in Marina Green (between Fort Mason and Crissy Field) and march to stop the fascist provocation at Crissy Field. We’re calling on all ILWU members, other unions and supporters to be there.

Stop these racist killers from killing again. If not now, when? If not here, where? We have the power. Let’s use it!

Charlottesville, Virginia, on Aug. 12 showed again that the fascists are not about “free speech.” The rally by Nazis, KKK and other white supremacists led directly to the murder of Heather Heyer and injuries to dozens of courageous anti-racist counter-protesters. Some of the same Nazis plan to come to the Bay Area this weekend. Meanwhile, Trump obscenely praises “good” fascists and “beautiful” statues of bloody Confede­rate slave masters.

Stop these racist killers from killing again. If not now, when? If not here, where? We have the power. Let’s use it!

And now the fascists want to bring their race-terror here? We say: Hell no! Who do these fascist creeps think they’re messing with? SF is a union town. Let’s bring out the whole Bay Area labor movement, with defenders of African American, Asian, Latino, gay, lesbian, women’s and immigrant rights, to stop the fascists.

To do this, we must rely on our own power as workers – not phony “friend of labor” politicians of both bosses’ parties. Their pleas for Trump’s Department of the Interior to deny a permit for Crissy Field are a diversion.

Any bans, especially in a port city, could be used against workers fighting for their rights. But as the Portland Painters said in a solidarity message, when we use our “power as workers to take action against the fascists on Aug. 26, that will be a call to action of workers and oppressed people throughout this country.”

And now the fascists want to bring their race-terror here? We say: Hell no! Who do these fascist creeps think they’re messing with? SF is a union town. Let’s bring out the whole Bay Area labor movement, with defenders of African American, Asian, Latino, gay, lesbian, women’s and immigrant rights, to stop the fascists.

Now’s the time to stand up for all that ILWU has fought for, as opponents of racism and oppression. We can’t let these racists and fascists keep on killing. Enough is enough. Let’s join together in unity and in strength to put our union resolution into action.

On Aug. 26, DON’T WORK! SHUT THE PORT DOWN AND THE FASCISTS TOO!

Passed on Aug. 17, 2017 – Whereas, the fascists, the KKK, Nazis and other white supremacists rallied and marched by torchlight in Charlottesville, whipping up lynch mob terror with racist, anti-immigrant and anti-Semitic slogans, and

Whereas, that attack resulted in one anti-racist counter demonstrator murdered and many others injured when one of the fascist bullies ran them down with a car, and

Whereas, President Trump’s whitewashing this violent, deadly fascist and racist attack, saying “both sides are to blame,” and his attacking anti-racists for opposing Confederate statues that honor slavery adds fuel to the fire of racist violence, and

Whereas, the Klan, Nazis and other racist terrorists represent a deadly threat to African Americans, Latinos and immigrants, as well as Muslims, Jews, LGBTQ people among many others, and directly to members of our union and the labor movement as a whole, and

Whereas, the fascist “Patriot Prayer” group that staged violent racist provocations in Portland, Oregon, and elsewhere, attracting Nazi and other violent white supremacists, has announced it will rally on Crissy Field on Saturday Aug. 26, and

Whereas, far from a matter of “free speech,” the racist and fascist provocations are a deadly menace as shown in Portland on May 26 when a Nazi murdered two men and almost killed a third for defending two young African American women he was menacing; and our sisters and brothers in the Portland labor movement answered racist terror with the power of workers solidarity, mobilizing members of 14 unions against the fascist, racist rally there on June 4, and

Whereas, ILWU Local 10 has a long and proud history of standing up against racism, fascism and bigotry and using our union power to do so; on May Day 2015 we shut down Bay Area ports and marched, followed by thousands, to Oscar Grant Plaza demanding an end to police terror against African Americans and others; the San Francisco Bay Area is a union stronghold and we will not allow labor-hating white supremacists to bring their lynch mob terror here,

Therefore, ILWU Local 10 in the best tradition of our union that fought these rightwingers in the Big Strike of 1934, will not work on that day and instead march to Crissy Field to stop the racist, fascist intimidation in our hometown and invite all unions and antiracist and antifascist organizations to join us defending unions, racial minorities, immigrants, LGBTQ people, women and all the oppressed.

Anthony Leviege is a current member and Jack Heyman a retired member of ILWU Local 10. They can be reached via jackheyman@comcast.net.