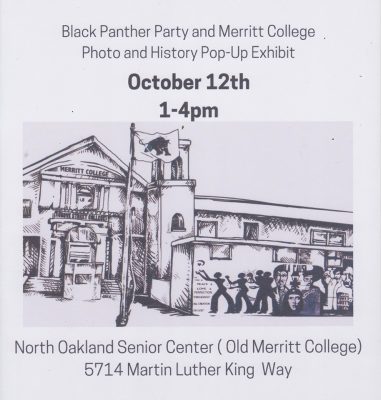 Grove Street College, which was also at other times named North Peralta Community College and Merritt College, was opened in 1954 at what is now 5714 Martin Luther King Jr. Way in North Oakland. This two-year community college served a student body which consisted mostly of poor, disenfranchised Blacks in the surrounding flatlands of Oakland.

Many of these people were older than 30 years of age and had not previously had an opportunity to attend college. They had hopes for better lives and enrolled as students seeking the knowledge and skills to help them attain and fulfill their goals.

Grove Street College, with its dilapidated buildings, low budget and insufficient staff, was expected to somehow give these attending students a chance to compete on an equal basis with those students attending larger, mostly white, universities like UC Berkeley and San Francisco State. With very little funding or support from the Peralta College District, which governed the community colleges in five cities, Grove Street College did manage to provide educational opportunities, offering an associate of arts degree, as well as classes to complete GED requirements, and many of its students did successfully transfer to larger colleges and universities and completed their educations.

Importantly, Grove Street College set some very historic and revolutionary precedents in education. Included in its student body were Huey P. Newton and Bobby Seale, founders of the Black Panther Party, as well as myself, and I became one of the Party’s first members. In 1966, shortly after meeting, Newton and Seale became instrumental in the founding of the very first Black Students Organization, The Soul Students Advisory Council.

In 1967, along with the formation of this student group came the demand for a Black Curriculum and a Black Studies Program, which was the Black Panther Party’s first campaign at Grove Street. Asians, Native Americans and Chicanos soon joined in, demanding Ethnic Studies courses as well.

Grove Street College set some very historic and revolutionary precedents in education. Included in its student body were Huey P. Newton and Bobby Seale, founders of the Black Panther Party, as well as myself, and I became one of the Party’s first members.

As the students’ demands grew more intense, the College District offered one or two courses which they named “Black History.” Initially these courses were taught by white instructors who were not prepared or interested in the subject matter and did not serve the needs of the community. But student demands and protests increased and soon a series of Ethnic Studies classes were offered with more appropriate instructors.

During the time, in the late 1960s and early 1970s, that the college was known as Grove Street College, Dr. Young Park was its president, and he was there for about five years in that capacity. Dr. Park was an innovative thinker who tried everything he could think of to produce, create and offer the best education and educational environment possible for his students. Despite strong opposition, especially from the college’s board and administrators and some non-community-minded students and residents, Dr. Park tried to, and did succeed, in establishing programs that truly served the interests of the student body, as well as the community.

One of Dr. Park’s ideas was to hire me, Elbert “Big Man” Howard, as an ombudsman. We worked together to implement a number of community survival programs on the campus, modeled after similar programs that the Black Panther Party already had up and running in the Bay Area.

Dr. Park was an innovative thinker who tried everything he could think of to produce, create and offer the best education and educational environment possible for his students.

By 1970-1971, two programs were in place: a free health clinic and a program which offered educational and employment opportunities for recently released parolees. The program was named The Peer Counseling and Work-Study Program and it allowed these adult students the opportunity to earn a stipend and also two meal tickets a day. They helped to get tasks done on the campus and at the same time took classes to earn their GEDs or college credits.

It was very validating for these students to know that they were worth something and that we believed in them. We offered them hope, as there were no other programs like this available for “ex-convicts” in the community.

At Grove Street, there was an African American instructor who was the student faculty advisor to the Soul Students’ Advisory Council. He designed and implemented a Black Studies Curriculum, which became the standard for many Black colleges, as well as many other colleges and universities in America. That instructor was Sid Walton. It took a while, but after many delays and racist ambushes, the Black History courses were approved for transfer credits to the University of California.

One of Grove Street’s students was Richard Aoki, a third-generation Japanese American who became a founding member of the Black Panther Party. He went on to UC Berkeley, and became a dynamic leader in the Third World Liberation Front’s student strike there. This led to the formation of the Ethnic Studies Department and courses at UC Berkeley. Richard later returned to the Peralta School District as an instructor and an administrator.

Many of Grove Street College’s students also went on to become doctors, lawyers, teachers and other professionals. Some became famous performers in the arts, in music and theater.

For example, Richard E. Gant, a former student, became a well-known stage, television and film actor. He has appeared in the television productions “NYPD Blue,” HBO’s “Deadwood” and in the film “Daddy Day Camp,” as well as many others. Gant has also been honored with a key to the city of Oakland.

Another former student is musician Bill Summers. A multi-instrumentalist, who played primarily flute while at Grove Street, Summers went on to become well-known as a percussionist, playing primarily conga drums, internationally. He worked with Herbie Hancock during the Headhunter years.

His long musical career includes working behind the scenes on film scores for various movies such as “The Color Purple” and, along with Quincy Jones, the TV miniseries “Roots.” Summers now performs as singer and percussionist and as a co-leader of the group Los Hombres Calientes, along with trumpeter Irvin Mayfield.

At the same time that these innovative programs were being put into place at the college, there was a major power struggle occurring. This was between the administration, which for years had wanted to close down Grove Street College and relocate the campus to the Oakland hills where they would build a new college, and the students, who wanted the college to remain in the flatlands, where most of them lived.

The new campus in the Hills did open in 1971 as Merritt College but Grove Street College was kept alive for several years after this, through community protests against shutting it down. Although these protests extended Grove Street’s life, the Peralta administration had systematically de-funded it and the campus fell into disrepair and was finally shut down in 1973.

There are many reasons why we should celebrate and remember Grove Street College. We must not forget that Grove Street College was the campus where The Black Panther Party grew from its inception there to an international force in the struggle for justice and equality for all people.

Through the efforts of the Black Panther Party and many students, programs were developed which addressed and reflected the educational needs of the surrounding community’s members. These programs served as models for those that quickly followed in colleges and universities across the nation.

There are many reasons why we should celebrate and remember Grove Street College. We must not forget that Grove Street College was the campus where The Black Panther Party grew from its inception there to an international force in the struggle for justice and equality for all people.

On behalf of former members of the Black Panther Party and It’s About Time, I am extending an invitation to all former students, faculty members, employees and to all interested members of the community to come and celebrate Grove Street College and its historical contribution to the people and city of Oakland.

Please join us on Thursday, Oct. 12, 1:30-2:30 p.m., to celebrate Old Merritt College (Grove Street College) and the birth of the Black Panther Party at 5714 Martin Luther King Jr. Way, Oakland. The event will be sponsored by It’s About Time Archives and the North Oakland Senior Center and will feature exhibits, speakers and music.

Elbert “Big Man” Howard is one of the six founding members of the Black Panther Party and is an author, lecturer and community activist in Sonoma County. He can be reached at bigman0138@aol.com. This is revised from the original, written March 27, 2011.