by Gayle McLaughlin, former mayor of Richmond, Calif., and candidate for lieutenant governor of California

As our tortured climate pounds the East with water and leaves much of California tinder dry, Southern California fire season seems to grow worse by the year. 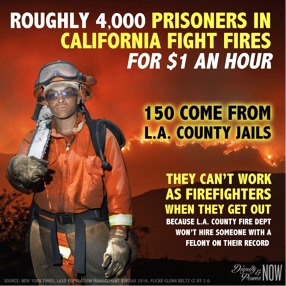 And in our growing need for firefighters, California continues the abusive practice of using pennies-an-hour prison labor to fight these fires. About 4,000 California prisoners fight fires for $1 an hour.

This is abuse, simply.

I want to organize with people everywhere to end all prison slave labor, and to close California private prisons.

I support programs where prisoners can reduce their sentences by working in “conservation camps,” clearing brush to prevent forest fires and fighting the fires themselves. But they must be paid fairly for each day of work – and $1 an hour is not fair pay.

No matter how you may want to dress it up, if you have people working for nothing or almost nothing, you’ve got slave labor, and it is not acceptable. Prisoners must not be used by the state as slave labor for the rest of society.

Here in California, our justice system has gone deeply wrong, in many aspects, including this one.

I want inmates in California to learn new skills, including firefighting, and I want that knowledge and experience to pay off for them once they have served their sentence. Excluding the formerly incarcerated from being hired as civilian firefighters needs to be reviewed and adjusted. California is missing out from hiring some of the most experienced firefighters in the world because of these obstacles.

No matter how you may want to dress it up, if you have people working for nothing or almost nothing, you’ve got slave labor, and it is not acceptable.

We also have to fully restore civil rights to people who are serving their sentences in California prisons. This means that they should have the right to vote for their representatives, including state and national government, as is the case in other states.

Yes, our California inmates (generally speaking) broke the law, and that is why they are in prison, but it is also true that the law of our land too often broke them. The inequality of our laws too commonly cornered many of these persons into a world of despair from where their crimes emerged. Nevertheless, they remain citizens of our nation and state (those who are), and as such they have the right to vote to reform and transform that world of inequality that conditioned their lives.

I want our inmates to have the dignified chance to vote for a better California, for better education, better jobs, better health care, better and affordable housing, better environment, better justice system rules, better living and working conditions. I want them invested in their future, in our collective future.

I want inmates in California to learn new skills, including firefighting, and I want that knowledge and experience to pay off for them once they have served their sentence.

California has too many private for-profit prisons, where the goal of the institution is to reach quotas, not to rehabilitate and reduce jail and prison populations.

I do not want for-profit corporations running private prisons any more. Their goal is to keep the prison filled as long as possible and get paid by inmate and day. Did you know that rates of physical assault are higher in many of California’s eight private prisons, and thousands of California inmates are housed in private prisons in other states, away from family support? These folks are more likely to stay in or return to the prison system. That is money in the bank for the private prisons.

As I see it, both the private corporate prisons and the state of California are abusing the prisoners and both are doing it for a financial interest.

I oppose any obstacles placed on legally mandated early-prison release programs justified by a state government’s concern that it could create a substantial reduction in the number of the “pennies-an-hour prison labor-firefighters.” The depletion of the number of cheap inmate-firefighters is not a valid reason for the state to keep a person from been released.

The state must release those due for release, hire them in a civilian unit and pay them fair wages. That’s a real win-win.

As I see it, both the private corporate prisons and the state of California are abusing the prisoners and both are doing it for a financial interest.

The flames are likely to get higher in the years to come. So let’s be smart and strategic in our response plan. Let’s keep giving California inmates an opportunity to learn firefighting skills and to reduce their sentence lengths, let’s pay them a decent minimum wage, and let’s respect their early release program dates.

Once released, let’s hire them and create with these formally incarcerated firefighters the most efficient and experienced firefighting force in the world. California needs them to save our resources and homes.

Learn more at GayleforCalifornia.org, and email Gayle@gayleforcalifornia.org or phone 510-984-6536 to contact Gayle and her campaign. 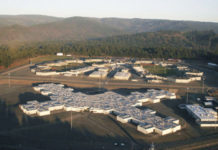