I spoke to Jonathan Chartian this morning. Released from prison Dec. 14, 2016, he is confined to his home when not at work, his job suspended since Hurricane Harvey. He is really concerned about the excessive show of police and military presence, which is not protecting the rights of citizens, rather complicating an already volatile situation between Black and Brown people and law enforcement.

Between 12 midnight and 5 a.m., everyone who is not traveling to or from work has the potential for arrest. And even those with reason to be traveling are accosted by police who are ticketing residents, like Chartian’s “uncle who was pulled over and asked where he was going.” After a litany of questions, he was ticketed for running a stop sign. A neighbor was also pulled over as he returned from Ft. Worth. Chartian said, “People are losing money. If there is a 12-hour job, the shifts are breaking down early.”

Police have converged on Houston from as far away as California, yet a Black child was kidnapped and raped by white men for five hours this weekend. One wonders who all these armed men and women are supposed to be protecting.

Chartian says that what is not shown on the news are the armed white racists who pose a threat to Black citizens. Elders in the community are trying to keep the Black youth calm, so that a war is prevented, a war Black people will lose given the fact that they are certainly out-gunned.

“The looting is over with,” Chartian says. “Why would anyone break into one of the flooded homes? Trader Truth the rapper’s house is still under water. He said he saw an alligator on his porch, so he is spending his time volunteering.”

Returning citizen, eldest child, father and husband, Chartian says his 13-year-old daughter is worried by all the armed militia and doesn’t understand their presence. He says businesses are closing early so their employees can get home. “No fast food after 7 p.m.”

He also said empty grocery store shelves are gradually getting full again, but banks will not let clients have more than $200 at a time and ATMs are out of service. “People have to budget their cash, because even if it is in their account, they cannot access it.”

“It’s a scary feeling. No ATM money. We have to use money orders. Can’t find too much cash. Bank won’t cash checks. We have to hold back on our rent.”

People in shelters in cities and smaller counties not affected by Harvey are also in a bind. If they take off their identification bracelet, they forfeit FEMA benefits. Chartian’s brother is in a shelter in Austin. “He has to abide by all rules. He lost everything.”

“My mom lost everything, her apartment and car. She called us at 12 and my brother rescued her and took her to our sister’s house, so she is not eligible for assistance, even though her apartment is beyond repair. People who went to shelter get aid first. Even though his sister documented everything, there is no funding to help her mother find another place.

There is a rumor, Chartian says, that Houston is not going to get the type of monetary aid requested until sometime next year. Some of his friends told him that they dropped donations off at one of the larger shelters but were told not to bring any more donations there. “They are trying to get people out of the shelters. It’s bad. They are giving people flu shots and tetanus shots if they were in the water.”

“Right now the death toll is at about 60-plus. The dive teams can’t go into some of the homes that are still underwater. Some people chose to stay in their residences.” He said that Addicks Reservoir overflowed for the first time in history on Aug. 28 and that Barker Dam was still cresting, so many residents there rode out the storm. Now, he said, they are releasing the pressure on the dam, causing flooding.

The presence of toxic and environmental hazards in residential communities are also of concern to Chartian, who recently became aware of a paint thinner facility not far from his home. There don’t seem to be any zoning laws or community input regarding the kinds of industries that can set up shop regardless of the danger to human life.

A member of the Self-Defense Family and Mandingo Warriors, Chartian told me, “These groups fought for better treatment for our people behind bars [in Texas]. Living arrangements and better food were outcomes. Even though the Texas prison system don’t pay us for work, we have a great educational system.”

“We had to fight for these systems. There was segregation in prison. Lots of bloodshed. Coming home was a big accomplishment for me after serving 18 years: Dec. 14, 2016.” He is in school studying for a barber’s license with plans to open a shop. His wife, TaRosalyn Reed, has a business, La’Roz Accessories, already making handbags.

The area where he lives in Harris County was not flooded; however, those with mansions near the reservoir are being flooded by the slow release of water. “A lot of areas are not going to be rebuilt,” he said. Some areas of Houston have been “underwater for two weeks. So many people are displaced in areas like Southside Southeast Houston, Huntsville, Kingwood area, along the Interstate, in Rosharon – a river that runs through there – Liberty County.”

“Beaumont and Port Arthur are also flooded. There is no water.” He says his uncle took a big truck and went to rescue his niece who was stranded at a college there.

Earlier in the crisis, parents were stuck without “milk, water, pampers.” One woman broke into a church for shelter. She and others rescued so many people she was seen as a hero, but she was willing to take the rap for breaking and entering if charges were pressed.

“The hurricane and flooding is taking a toll on the people.” Chartian said. He said the municipality is “preparing us for a 15-day blackout.”

I had a conversation Sept. 5 with Sheryl Ball. A cousin of Sister Afua Holt, journalist, she was in the middle of preparing disaster packages for the community in Beaumont. Beaumont and Port Arthur are coastal cities I’d heard a lot about. Mrs. Ball said she’d had people staying with her. When one family left for home, another stepped into their shoes. 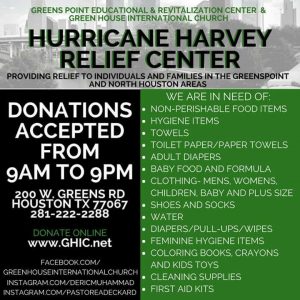 Though hit hard, everywhere was not flooded. However, there are areas of Beaumont still underwater and without electricity and water [as of Sept. 8]. I’d heard the entire city was under water, but Mrs. Ball said she didn’t experience flooding. However, her brother who lives on the outskirts of Beaumont in a trailer park, experienced water that drowned the cars, he is now looking for a motor trade insurance because he will new a new trailer. He had to leave once the rain started in earnest Sunday, Aug. 27. It got up to 47 inches, she said; however, they went back.

It was flooding on the highways headed to Rose City and along Highway 105, Highway 90 toward Liberty and Dayton as well. The north end of Beaumont is still flooded. Many elders in that area refused to leave. They said they would tough it out, but today, someone reported 30 people stranded there without water and electricity. They didn’t leave, Mrs. Ball said, because they didn’t have anywhere to go. They also feared their apartments would be burglarized.

Her houseguest went back to pack a few belongings because the state was not going to let anyone return. While they toughed out the storm, someone ran a generator for the elder residents. The owner knew they were stranded yet did not report this to authorities. Speculation is he was too busy taking care of his personal property. Luckily, everyone is OK.

The couple who were staying with her went home Sunday, and another woman arrived the same day. Major Drive was under water and where Mrs. Ball’s brother lives, a big hole where the city is building a megastore flooded his home. Without mail delivery, people are dependent on support from their neighbors. One of Ball’s friends “couldn’t get food stamps because she lost her identification card.” She had to wait for the mailman for its replacement. Mail didn’t start back up until the end of last week.

All the evacuees were sent different places, and family members have not been able to keep up with their transport. “One of my cousins is in a shelter. I don’t know where he is,” Mrs. Ball said. Her son, who lives off 11th and Fannett Road, told his mother the water stopped rising when it got just below the wall sockets in his house, while another relative said the water stopped at the foot of his driveway.

When asked about a curfew, she said there is none there. 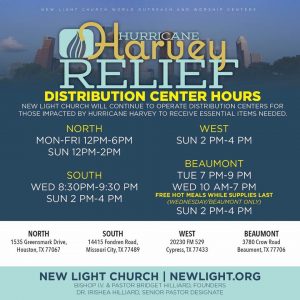 Since she was at her church, New Light, when I called, I was able to speak to Pastor Tina Egans, who with her husband serve the New Light Christian Center Beaumont congregation. Text to give, at 71441NewLight, or go to Facebook.com/NewLight. They have four churches in Houston and one in Beaumont.

Pastors Tina and Terry Egans live in the Northern area in Houston, the Spring area. They didn’t have any flooding there; however, the couple are familiar with disaster relief: Ike, Katrina and now Harvey.

One of the churches in Houston was used as a shelter for initially 60 people, eventually 400. The fire department broke into the structure in their rescue efforts. It is a large building, the Old Lakewood building. People were stuck there for three days. The Red Cross could not get to them. Metro buses couldn’t get to them. The pastors were calling Congresswoman Sheila Jackson Lee that Sunday, Aug. 27, when the storm hit.

On the road, the pastors have been going back and forth between Houston and Beaumont. She said the longest it took to get back to Houston was three hours. When Cyprus Creek started flooding, they couldn’t pass. On Aug. 30, they were about to get on the road again.

The church has a credit union in Houston that will be a tremendous help to their 20,000-plus members, including those people in the community who also lost everything. They have four distribution sites, and New Light plans to have a FEMA representative on campus. Lots of people might not have access to technology, so at the One Stop centers, people will be able to handle all their business under one roof.