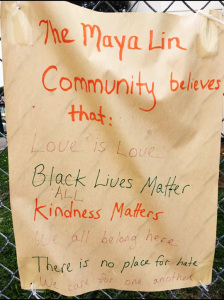 San Francisco – The ACLU of Northern California sent a letter to the superintendent of the Alameda Unified School District urging him to reconsider a ban on Black Lives Matter signs and stickers. The ban violates the California constitution by placing unlawful restrictions on student speech and conduct, as well as the First Amendment.

Lewis contacted Superintendent Sean McPhetridge, who confirmed the ban and cited a school board policy that says “the superintendent, principal, or designee shall not accept for distribution any materials or advertisements that…proselytize or position the district on any side of a controversial issue.”

McPhetridge said the issue was brought to his attention by a parent whose child had picked up a Black Lives Matter sticker from a table at school. The family “did not appreciate and did not solicit” the sticker.

“This is a false equivalency because there are no systems in place that have been marginalizing white folks for generations,” said Lewis. “Saying Black Lives Matter does not imply anything about any other lives. It is simply acknowledging that Black Lives Matter, too.”

Lewis was one of a number of parents who expressed concern after a four-foot long noose was found hanging from a fence at Alameda High School on September 5. Following that, there were ongoing debates about police violence and racism. Many students wore Black Lives Matter stickers and brought signs to show support.

On Sept. 6, a “Black Lives Matter” sign at Maya Lin Elementary was vandalized and changed to “All Lives Matter.” That evening at back to school night, stickers and signs were placed in the common area at the school to show support for Black students. That’s when the school district received the parent complaint.

“Saying ‘Black Lives Matter’ does not mean ONLY Black lives,” explained Dede Lewis for the sake of those who don’t understand how dismissive it is to say, “All Lives Matter.” “It is simply acknowledging the value and contributions specifically of Black members of our society during an arguably pivotal time for race relations in our country.

“It is an acknowledgement that ALL people are not affected by systemic racism or bias. ALL lives are not disproportionately ending at the hands of law enforcement. Our country wasn’t built on enslaving ALL lives. ALL students are not disproportionately labeled with ‘behavior problems’ or as ‘aggressive’ or ‘threatening’ due to the implicit bias of teachers and administrators.”

“Saying ‘Black Lives Matter’ does not mean ONLY Black lives,” explained Dede Lewis for the sake of those who don’t understand how dismissive it is to say, “All Lives Matter.”

“It’s sad that the Alameda district considers discussions regarding supporting Black lives, fixing police brutality, and ending racism controversial,” Conner said. “School districts do not have a right to violate protected speech based on arbitrary reasons.

Legally, students have a right to free speech and expression at school. They have the right to wear sports jerseys, shirts that show solidarity with LGBTQ students, and they have a right to support the Black Lives Matter movement.

The letter seeks a response from the district by Nov. 13. If the problem isn’t rectified, the ACLU will consider next steps.

Leslie Fulbright, communications strategist for the ACLU of Northern California, can be reached at lfulbright@aclunc.org.