In 2010, Victoire Ingabire attempted to run for president against Rwanda’s Paul Kagame, but went to prison instead. The Rwandan Supreme Court ultimately sentenced her to 15 years for denying the 1994 genocide against the Tutsi and inciting Rwandans to rise up against the government. 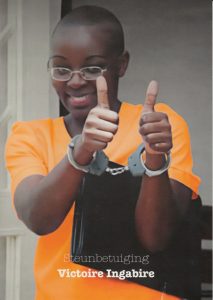 On Nov. 24, the African Court of Human and People’s Rights ruled that she did not receive a fair trial, that she had not denied or minimized the Tutsi genocide, and that her criticism of the government should have been allowed as part of her freedom of expression within Rwandan law.

In July 2010, several months before her arrest, Ingabire spoke with me for Womens International News Gathering Service despite a court order to remain silent. This is part of that conversation, the entire transcript of which was published on the San Francisco Bay View website:

Ann Garrison: With regard to your own arrest, indictment and trial, you’re accused of disputing the official history of the Rwanda Genocide, which is that extremist Hutus planned genocide against the Tutsis and then killed a million Tutsis within 100 days in 1994, though the phrase is often “Tutsis and moderate Hutus.” How do you understand the Rwanda Genocide of 1994 and what would you most like the world to understand about it?

AG: One thing seems especially important to understand here: You were saying that the massacres did not end at the end of the famous hundred days, that the killing continued after that, and both Hutus and Tutsis were killed. Is that right?

VI: Of course, of course. The killing was not stopped after 100 days from April to July. After this period, there were many killings. And RPF [the Rwandan Patriotic Front led by Gen. Paul Kagame] took the power in July 1994, and after they took power, the killing was going ahead until 1997, when they killed the people in the Congo.

AG: And you say these were both Hutus and Tutsis who were perceived to be enemies of the government?

VI: Yes, of course, there were Hutus and Tutsis, because RPF, when they came in the country, they considered the Tutsis in Rwanda as the enemy who accepted to collaborate with the Hutu government. The RPF, they killed also Tutsis; they did not kill only Hutus, but they killed also Tutsis, like the extremist Hutus killed the Hutus and killed the Tutsis.

AG: So they killed the Tutsis who had been left behind when they left for Uganda.

VI: Yes, yes. For the RPF, the Tutsis who stayed in the country, who worked together with the Hutu government – they saw them as the collaborators of this Hutuist regime. And, they considered – most of them were considered as the enemy.

As of Nov. 26, the news of the African court’s ruling in Victoire’s favor had been reported on the websites of Jeune Afrique, La Libre Afrique, Radio France International, the Dutch publication AD, the Voice of America’s French Africa edition and Pacifica Radio’s KPFA Weekend News in the U.S. It had not been reported in Rwanda where the press is completely under state control.

In October, five members of the U.N. Subcommittee to Prevent Torture traveled to Rwanda to investigate allegations that the government was guilty of torture. They asked to conduct private and confidential interviews with Victoire Ingabire and other incarcerated people, but the Rwandan government refused. The committee members cut their visit short, saying Rwanda’s non-compliance made them unable to accomplish their goals.