Nov. 22, 2017 – On Friday, Nov. 24, the biggest retail shopping day of the year, also known as “Black Friday,” BlackOut for Human Rights will kick off its fourth annual #BlackOutBlackFriday campaign, urging people nationwide to take part in an economic boycott of major retailers and any corporations that violate human rights standards and/or profit off the pain and suffering of others.

Launched in 2014, #BlackOutBlackFriday is a call-to-action encouraging individuals to refrain from shopping to protest social and economic injustice in the U.S. and instead engage in cultural activism. As an alternative, BlackOut for Human Rights – a collective founded by filmmaker Ryan Coogler with members including Ava DuVernay, Jesse Williams, Michael B. Jordan, Charles King and others – has organized FREE events in New York City and Oakland, California, to celebrate arts and culture and to build solidarity against extreme capitalism and human right atrocities happening across the country.

This year’s #BlackOutBlackFriday events include special screenings of the acclaimed documentary, “WHOSE STREETS,” which takes an unflinching look at the uprising in Ferguson, Missouri, after the killing of unarmed teenager Michael Brown. Following the New York screening, there will be a conversation with activist, journalist and BlackOut for Human Rights member Rosa Clemente and the film’s co-director Sabaah Folayan, as well as a special musical performance by composer-pianist and BlackOut for Human Rights member Samora Pinderhughes.

Partners for this year’s #BlackOutBlackFriday include the Campaign for Black Male Achievement, ARRAY, PICO National Network and Color of Change.

Details on the FREE #BlackOutBlackFriday events are below:

About BlackOut for Human Rights

BlackOut for Human Rights is a collective of filmmakers, artists, activists and concerned citizens devoting their resources to address the staggering number of human rights violations in the United States. The collective was founded by filmmaker Ryan Coogler and comprises both high visibility and everyday citizens.

BlackOut has hosted national protest actions, donation drives and special events including the 2016 and 2017 #MLKNOW events celebrating MLK Day at Riverside Church in Harlem, which drew over 2,200 attendees and nearly half a million views online; and February 2016’s #JusticeForFlint event that raised more than $160,000 towards recovery efforts in Flint, Michigan. For more information, visit www.facebook.com/BlackOutforHumanRights and follow @UnitedBlackOut on social media. 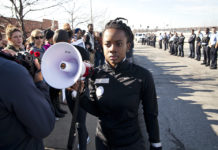