In response to a recent S.F. Chronicle report detailing horrendous conditions suffered by female detainees in the West County Jail in Richmond, today I sent a “cease and desist” letter to Contra Costa Sheriff David Livingston.

Despite massive opposition from Richmond residents and elected officials, the Contra Costa Sheriff’s office contracts with the U.S. Immigration and Customs Enforcement (ICE) for the use of the West County Jail to house people suspected of immigration violations.

According to the Nov. 2, 2017, article by Otis R. Taylor Jr., female ICE detainees are held in jail cells with no toilets, forced to relieve themselves by urinating and defecating in their clothes or use plastic bags, are locked up for 23 hours a day with frequent cancellation of the one hour outside their cells, are given intolerable food, have a lack of basic health care services, and experience a terrifying environment with distressed inmates screaming and pounding on their cell doors.

Given the details of cruelty outlined in the article, my letter to Sheriff Livingston demanded he immediately terminate all violations of human and constitutional rights of ICE detainees in his custody. It read: “As a U.S. citizen, a resident of Richmond, a taxpayer and a former Mayor of Richmond, I demand that you immediately stop these intolerable conditions of detention and cease every abuse of basic human rights of the people detained in any facility under your jurisdiction.” I also repeated my condemnation of the County’s contract with ICE and demanded its termination.

Given the details of cruelty outlined in the article, my letter to Sheriff Livingston demanded he immediately terminate all violations of human and constitutional rights of ICE detainees in his custody.

This battle is hardly new: During my first month as Richmond Mayor in 2007, I called for a moratorium on ICE raids and reaffirmed Richmond’s Sanctuary City status, ordering the Richmond police and all City employees not to collaborate with ICE. I traveled to Washington, D.C., in 2007 to testify to Congress about the trauma that ICE raids were causing Richmond families.

I encourage you to speak out! Contact Contra Costa Sheriff Livingston and demand immediate correction of these abuses and the termination of the contract with ICE. Please also reach out to members of the Contra Costa Board of Supervisors and the Contra Costa District Attorney to demand appropriate legal actions against the Sheriff. Their contact can be found below:

I encourage you to speak out!

The unconscionable treatment of immigrants by ICE and the need to promote justice for many other groups of vulnerable California residents are among the reasons why I am running for Lt. Governor. A better California is possible!

This commentary was written as part of Gayle McLaughlin’s lieutenant governor campaign and ends with the statement, “Paid for by Gayle McLaughlin for California Lieutenant Governor 2018, FPPC #1396385.” The Bay View chooses to publish it; no payment has been given or received. Learn more about the campaign at https://gayleforcalifornia.org/. 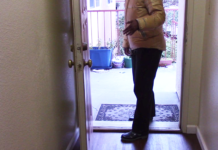