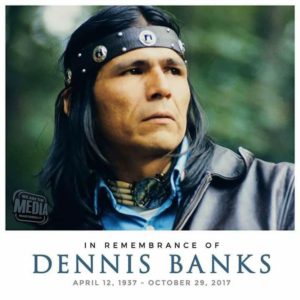 In the late 1960s and early ‘70s, two names emerged from the Native American and Indigenous community that stood for resistance to white repression and assaults on Native life: Russell Means and Dennis Banks.

They were men who lived, at times, in urban America, and experienced its impoverishment as well as its penchant for broken dreams.

In a time of mass resistance and social upheaval shown by the anti-war (re Vietnam) and Black liberation movements, Banks was among thousands of young activists of Native, Indigenous communities who rose up to speak – and act – on behalf of the oppressed.

In 1968, after leaving prison, Banks joined forces with Clyde Bellecourt to found the American Indian Movement (AIM), which sought to organize scattered Native clan members into a militant cohesive unit. At its height, it had some 25,000 members.

In 1970, Banks and Means declared a “Day of Mourning” to mark Thanksgiving Day, when AIM activists seized the replica ship dubbed the Mayflower II in Plymouth, Mass., on TV, when real Indians confronted whites in Indian costume.

In 1972, a national caravan of hundreds seized the Bureau of Indian Affairs offices in Washington for a week, to protest a long train of broken treaties.

In 1973, AIM activists led by Banks seized the village of Wounded Knee, South Dakota, the site of the infamous massacre of Indians in 1890. The siege, lasting over 70 days, would become a 20th century hotspot of conflict – armed conflict – between AIM and agents of the U.S. government.

In his later years, Banks became an actor, and his striking, chiseled features filled many a screen. He later became an educator in several colleges for Indian youth.

On Sunday, Oct. 29, Dennis Banks, Ojibwe, living on his northern Minnesota Leech Lake Reservation, closed his eyes on the same land where his eyes first opened, 80 winters ago.

Leonard Peltier on Dennis Banks: Let me share a few memories with you 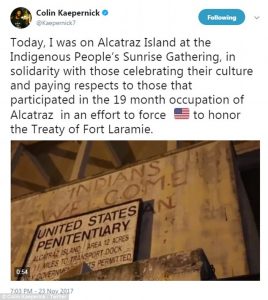 Today, let my voice join in harmony with the brothers and sisters of the American Indian Movement to address our great loss of your father, grandfather, brother and friend, Dennis J. Banks. When I heard he was going to have heart surgery, I was praying for a speedy recovery. Three weeks prior to Dennis having surgery, I had a triple bypass open heart surgery with good results, so I was shocked to hear he was having problems.

Let me share a few memories with you. I first started hearing about Dennis in the late ‘60s while being involved in the fishing and hunting struggle at Franks Landing in Washington State.

After returning to my home at the Turtle Mountain Chippewa Nation in North Dakota, I was aware of the occupation at Alcatraz in California. I also started hearing Dennis speaking out on TV and radio. I became involved in a struggle involving Native issues in Arizona and while there, I was invited to an annual AIM convention at Leech Lake, MN. I met with Dennis and was impressed with the public commitment he made on the Chunupa, to never use alcohol or drugs and to never refuse a call for help from Native people. I became a member the American Indian Movement and worked out the of AIM Chapter in Milwaukee Wi.

In my eyes, Dennis was a charismatic and powerful speaker and one of the most committed leaders in resisting the longest war in US history against Native people of our Nations, not only for AIM but for all Native activist groups. He spoke of the genocidal practices of other countries being used against Indigenous peoples.

He was most known for being the last person to leave the 71day shoot out called the Wounded Knee Occupation in 1972, where over 250 thousand’s rounds of ammunition were fired into Wounded Knee by the US Gov’t and the GOON squad. There is proof that none of the ammunition checked out of the federal armory were ever turned back. I believe the plan was to kill all women, children and men Warriors. Dennis continued to answer the call from Native people seeking help and he traveled wherever he was needed even while being under multiple indictments because of Wounded Knee. If convicted of the charges, he was facing 150 years in a federal prison, along with another AIM leader, Russell Means.

We, as Native people, owe a huge debt to Dennis and other AIM leaders, for taking a strong stand to protect and preserve our Spiritual and cultural way of life. The direction of the American Indian Movement has always been from our Native Elders and Spiritual leaders. We were there to protect them as they passed on the knowledge and protocol of our Sacred Ways. We will forever be grateful to those Elders and to the many members of the American Indian Movement who were willing to live and die for a way of life that has been our way of survival for Centuries.

Now my brother Dennis has joined our loved ones who have crossed over into the Spirit world and I know they gave him one hell of a welcome reception! They know his heart, and they know he was a true Warrior to the end.

In my most humble way, I ask that we never forget those who made the ultimate sacrifice to try to make a better world for the coming generations. Please, sing their songs with honor, in their memory, tell their stories with pride with every opportunity you have, and always, please remind our young people and each other, that every battle that was ever fought, every life that was ever taken, every ceremony being performed, is with our future generations in mind.

Please remember Dennis James Banks like I do, as being one of the greatest Warriors of our time. I am proud and humbled to call Dennis my brother.

In the Spirit of Crazy Horse

Political prisoner Leonard Peltier, after becoming one of the best-known Indigenous rights activists in North America, was wrongfully convicted in 1977 of having murdered two FBI agents. He has been in prison for over 40 years. Send our brother some love and light: Leonard Peltier, 89637-132, USP Coleman I, P.O. Box 1033, Coleman, FL 33521. This statement was delivered via the International Leonard Peltier Defense Committee. 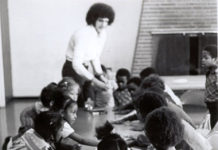