On Nov. 8, a federal judge said that he will dismiss a lawsuit against San Francisco State University, several SFSU administrators and Professor Rabab Abdulhadi.

The suit was filed in June by The Lawfare Project, the self-described “legal arm of the pro-Israel movement.” Lawfare accused defendants of “fostering a hostile environment for Jewish students” by tolerating the activism of Palestinian students and loud criticism of Israel’s policies.

“I am pleased that the judge saw through the bunch of lies by The Lawfare Project,” Abdulhadi said. “This legal bullying attempts to pick up where other members of the pro-Israel network previously failed, namely to get rid of me and dismantle advocacy for justice in Palestine at SFSU.”

Judge William Orrick of the U.S. District Court of Northern California started by describing the legal shortcomings of the complaint. “To make a valid discrimination complaint, you have to describe conditions now, not between 1973 and 2009,” he said.

About 100 supporters of academic freedom and Dr. Abdulhadi rallied in front of the Federal Building on Golden Gate Avenue before the rally and packed the courtroom for the 70-minute hearing. Dozens more supporters could not get into the room. Supporters included members of the Arab Cultural and Community Center of SF, Jewish Voice for Peace, Queers for Palestine, the National Lawyers’ Guild and many others.

The lawsuit alleges a persistent pattern of anti-Semitism at SFSU and other campuses. A long string of articles in the Jewish media and the mainstream media have made the same claims. However, studies by Stanford University and surveys by the University of California system have found that Jewish students typically feel more comfortable on campus than any other group surveyed.

Studies by Stanford University and surveys by the University of California system have found that Jewish students typically feel more comfortable on campus than any other group surveyed.

The goal of such lawsuits and media campaigns is not to protect Jewish students but to protect the state of Israel from criticism. The complainants intentionally confuse anti-Semitism, hatred of or discrimination against Jews, with opposition to the actions of the state of Israel, a legitimate and constitutionally protected political position.

The real victims of discrimination at SFSU have been Palestinian students and faculty such as Professor Abdulhadi. Dr Abdulhadi’s progam in Arab and Muslim Ethnicities and Diasporas (AMED) runs without any University-paid support staff. She is the only professor in the program, though SFSU promised her two additional professorships when she was hired. Even so, the AMED program has continued to grow and now can be taken as an academic minor.

At the rally, members of the General Union of Palestinian Students (GUPS) said they had been targeted with surveillance and had been threatened. GUPS has been repeatedly investigated by the University for their political actions.

Activist students and Prof. Abdulhadi have been targeted three times with racist flyers pasted all over campus by the right-wing David Horowitz Freedom Center, a pro-Israel extremist group. Nothing has been done to prevent this hate speech.

Although the lawsuit has been described as “frivolous,” because of its lack of supporting evidence, in a social sense it’s a serious matter. The complaint invokes the U.S. State Department definition of anti-Semitism, which conflates criticism of Israel and its Zionist state ideology with anti-Semitism.

If this definition becomes widely accepted, almost any activism for Palestine could be defined as hate speech. Legislation to move this definition into law is being heard in Congress and in state legislatures around the country, including Sacramento.

The suit has gained publicity in local, state and national media for the Israel Lobby’s storyline of widespread campus anti-Semitism. The Lobby has put a lot of resources into this case. The international law firm Winston & Strawn LLP, which has more than 900 attorneys on their staff, filed the suit along with The Lawfare Project.

The goal of such lawsuits and media campaigns is not to protect Jewish students but to protect the state of Israel from criticism.

For this reason, Judge Orrick’s dismissal of the suit sends an important message. “The decision to dismiss the suit proves that these types of legal attempts by Israel advocacy groups will fail,” Palestine Legal attorney Liz Jackson said. “They have no merit because the facts they allege are untrue.”

Groups like Lawfare have filed similar actions before and have suffered defeat in court every time, because pro-Palestinian activism does not discriminate against Jews or anyone else. Israel Lobby groups keep doing it because their real battleground is the media and the legislatures, and the suits drain the resources of people like Dr. Abdulhadi and Palestine Legal, and gain publicity for the Lobby’s false claims of anti-Semitism.

Dr. Abdulhadi said the people and organizations backing her won’t quit. “For me personally, it renews my faith, my determination [to continue teaching],” she said. “These campaigns are designed to destroy careers. So this is a wake-up call to the Zionists to say, you need to back off, and the people won’t allow you to do this.”

David Spero, of Jewish Voice for Peace, can be reached at david.media.jvp@gmail.com.

The bigots are at it again. New posters have been popping up on college campuses in a smear campaign aimed at vilifying academics and students who are vocal on the Israeli Colonialism Project in Palestine.

The most recent wave of defamatory posters appeared at San Francisco State University, U.C. Berkeley and U.C. Irvine; they are the product of David Horowitz’s “Freedom Center,” a far-right organization focused on anti-Muslim activism. Horowitz, as described in a report by the Center for American Progress, is a prominent figure instrumental in demonizing Islam and spreading fear about an Islamic takeover of Western society.

Since the election of President Trump and the rise of white supremacist groups, anti-Semitism and Islamophobia have dramatically increased across the United States. Exploiting this atmosphere of hate and xenophobia, pro-Israel groups have intensified their attacks on advocates for Palestinian rights, as well as supporters of the Black Lives Matter movement, Mexicans, immigrants and Muslims.

Exploiting this atmosphere of hate and xenophobia, pro-Israel groups have intensified their attacks on advocates for Palestinian rights, as well as supporters of the Black Lives Matter movement, Mexicans, immigrants and Muslims.

These latest attacks on academics, activists and students are not isolated incidents; they are part and parcel of an overarching strategy to demonize Israel critics and vilify Muslims. Similar defamatory ads have targeted Israeli critics on several other U.S. college campuses in the past, and Muslims across the country have been subject to both physical and psychological harassment provoked by ads on public transit systems purchased by the pro-Israel, Houston-based American Freedom Defense Initiative (AFDI) with a declared agenda of whipping up anti-Muslim sentiment across the U.S. 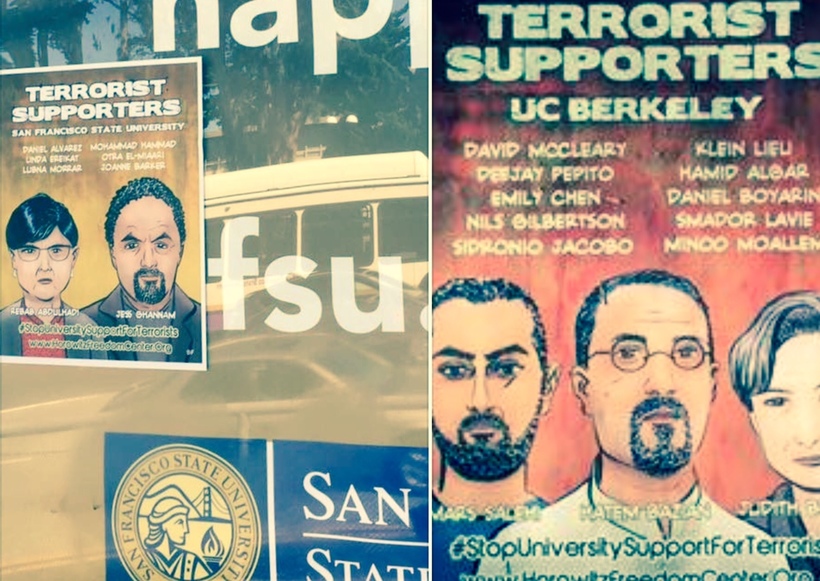 The San Francisco Bay Area, recognized as one of the most liberal regions in the nation, has recently been witnessing a plethora of activities by hatemongers and right-wing extremists, who under the guise of free speech have descended on college campuses to incite, spew hate and plant the seed of division between communities. A series of talks organized by right wing provocateur Milo Yiannopoulos was scheduled to kick off on Sept. 24, 2017, at U.C. Berkeley. Milo, who promised to attract a bevy of high-profile speakers, such as Ann Coulter and Steve Bannon, was greeted by dozens of counter-protesters on Sunday and spoke for only 15 minutes.

Such appearances, mostly brief, since February, by Milo and similar-minded speakers have cost UCB in the neighborhood of $1.4 million to provide security for these events. The university estimates the expenses incurred to be $200,000 for Milo’s appearance; $600,000 to host Ann Coulter (whose event ultimately was canceled by the sponsoring campus groups); and $600,000 for a recent talk by conservative writer Ben Shapiro.

By no coincidence, just a few days before Milo’s most recent highly publicized event, defamatory posters appeared on the grounds of San Francisco State University, U.C. Berkeley and U.C. Irvine. The posters, printed in the style of Wild West Wanted posters, target professors, students and activists from different ethnicities, including Muslims and Jews, whose common thread is that they advocate for social justice and Palestinian rights. 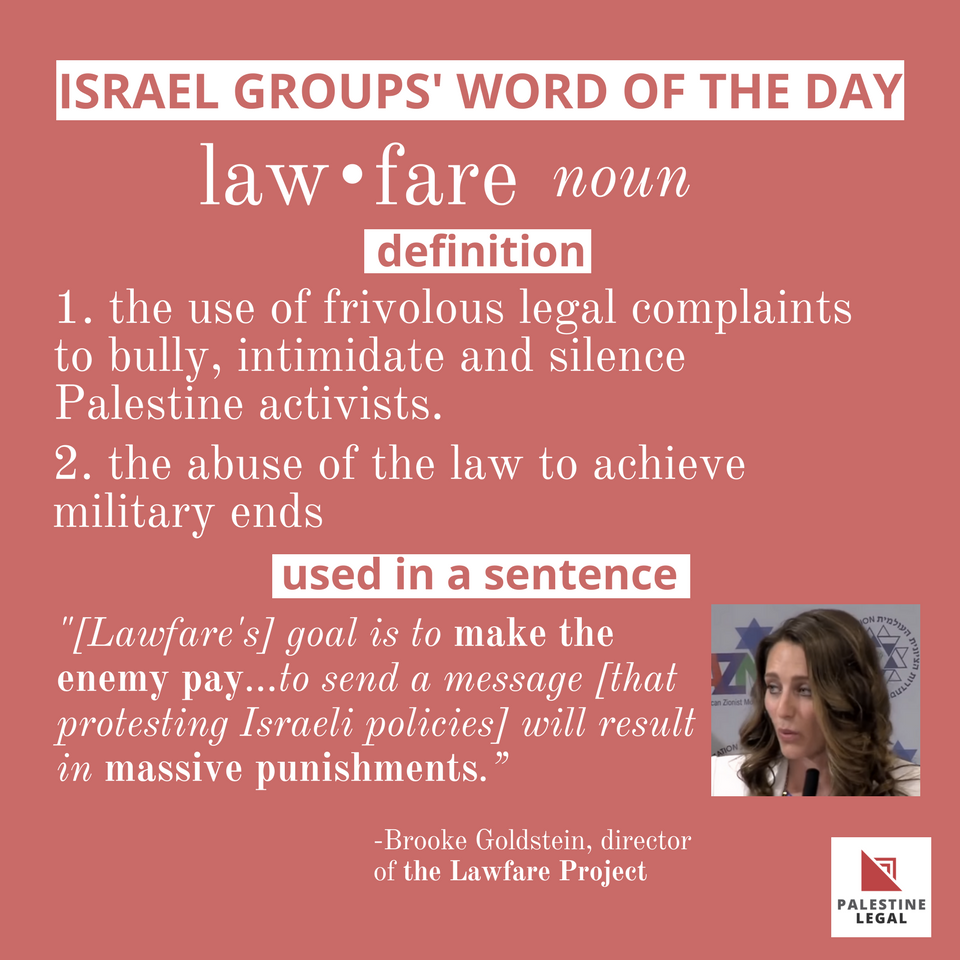 At San Francisco State University, the Arab and Muslim Ethnicities and Diasporas Studies (AMED) is a case in point. Not only has Dr. Rabab Abdulhadi, director and senior scholar at AMED, been pictured on virulent hate posters plastered campus-wide, she has also been named in a lawsuit filed in June 2017 by the Lawfare Project, a shadowy organization that advocates the “use of the law as a weapon of war against critics of Israel.”

The lawsuit, filed against SFSU and several university administrators in addition to Dr. Abdulhadi, alleges that SFSU willfully engaged in anti-Semitism by fostering a campus climate that is hostile to Jewish students. The lawsuit cites an incident in the Spring of 2016, when a coalition of students representing a multiplicity of communities, ethnicities and backgrounds who stand in solidarity for the freedom of Palestine protested a speech by the Israeli mayor of Jerusalem, Nir Barkat, for his role in enforcing Israel’s occupation over a divided city and for his incitement against Palestinian communities.

Most of the allegations are based on a false conflation of the criticism of Israel’s actions with anti-Semitism: parallels that have been soundly rejected and refuted by many Jews, including members of the Jewish Voice for Peace (JVP).

Professor Abdulhadi is no stranger to smear campaigns by pro-Israel groups whose attacks against her have continued to amplify since AMED was founded. Some examples are: 1) having her name and personal information circulated on Canary Mission, a website created to slander student, faculty and community activists for Palestinian rights as extremist, anti-Semitic, and sympathetic to terrorism; and 2) being accused of misusing university funds by another pro-Israel group called the AMCHA initiative, which employs tactics to stifle debate on Israel on college campuses. 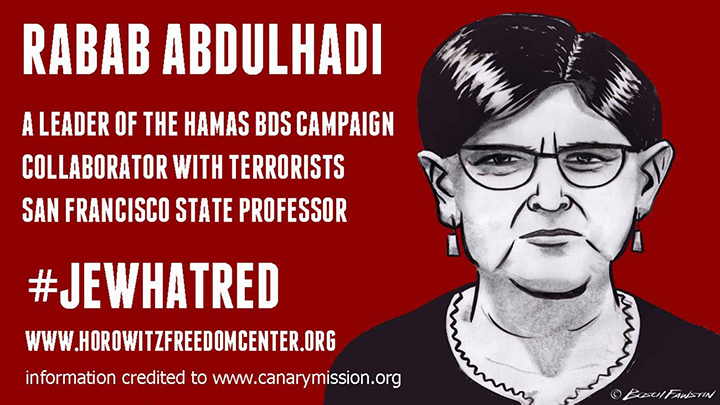 These accusations triggered numerous audits and investigations conducted by SFSU and California State University. Dr. Abdulhadi was exonerated by all of them.

While in most cases false allegations are quickly refuted by the students and academics, they do exert a financial and emotional toll on those subjected to these smear campaigns, subverting the learning process and threatening academic freedom. Only when academic institutions succumb to the bullying tactics do the fear-mongers win.

Shortly after the defamatory posters appeared on its campus, U.C. Berkeley Chancellor Carol T. Christ sent out an email to students, faculty and staff condemning these “cowardly acts in the strongest possible terms.” She promised an investigation by the U.C. police department.

Meanwhile, San Francisco State University President Les Wong remains AWOL. In one instance, SFSU refused to have any of the posters removed, claiming them to be legitimate free speech instruments.

President Wong has made no mention of hate speech and threats directed at the Muslim and other minority communities involved in the incident at issue. Instead, he has chosen to convene a task force on Sept. 26 to address “Campus Climate.”

However, the focus in the academic year of 2017-2018 has been defined solely to address “the safety of Jewish students on campus, the eradication of anti-Semitism and the improvement of Jewish community relations with the campus.” Following this initial focus, according to a letter sent by Wong on Sept. 1, 2017, “the Task Force will expand to consider Islamophobia.”

Consider, President Wong? No need to consider; Islamophobia is alive and well on SFSU campus, and refusing to acknowledge it is tantamount to promoting it.

Jamal Dajani, co-founder and host of Arab Talk Radio, can be reached at arabtalk@kpoo.com. This story first appeared Sept. 24, 2017, on Huffington Post.