Death Row, San Quentin, Calif. – As I sit here in a 4½-by-11-foot cage on Thanksgiving Day, I first and foremost am thankful to be alive. On Feb. 10, 2004, I came within three hours and 42 minutes of being strapped down to a gurney, tortured with lethal poison and murdered by volunteer prison-guard executioners.

So, yes, I am very thankful to be alive. I am also very thankful for all the people – my legal team, friends, family, supporters and activists working to end the death penalty – who have helped make my being alive possible.

I have been in a cage like this, with two feet of space between the side of the bed and the wall, for most of my adult life, for murders I did not commit. I eat prison slop for breakfast, lunch and dinner, and the guards look up my butt at least once a day to make sure I don’t have contraband when I leave this cage.

As I sit here in a 4½-by-11-foot cage on Thanksgiving Day, I first and foremost am thankful to be alive.

I have been on death row in the state of California for more than 32 years, having come to this place in May 1985, and I have been fighting for my life ever since. This modern-day plantation in which I am forced to live is a very dirty and inhumane place for any human being.

After my stay of execution in 2004, I went on to suffer from post-traumatic stress for years due to that sick ritual of death this prison put me through. No human being should ever have to endure what I have, not even if they are guilty of the crime they were convicted of committing.

I am innocent, and my fate now lies in the hands of Gov. Jerry Brown. On Feb. 17, 2016, Norman Hile, my pro bono attorney from the prestigious law firm of Orrick, Herrington & Sutcliffe, filed my petition for clemency in the office of Gov. Brown.

I have respectfully asked the governor and others to look at my case with an open mind, outside the legal box that has me close to being killed for murders of which I am innocent. Doing this is truly important, especially now that many Americans are learning from frequent news reports the truth about America’s criminal justice system and some of the people who work within it.

I have respectfully asked the governor and others to look at my case with an open mind, outside the legal box that has me close to being killed for murders of which I am innocent.

People have learned that this system is dishonest, and that some of its investigators, prosecutors and judges cannot be trusted and are more concerned with winning cases or with following their political ideology than with truth or justice. This is especially true in my case. 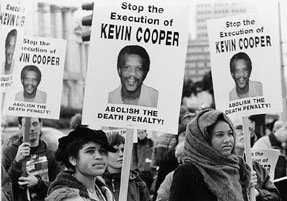 To show their concern as to why my case should be heard on its merits before I am executed, six of the 11 stated these words of dissent in my last appeal: “Public confidence in the proper administration of the death penalty depends on the integrity of the process followed by the state. … [Twenty-four] years of flawed proceedings are as good as no proceedings at all.”

The other five judges, showing their concern about the truth not being told in my case, stated: “The state of California may be about to execute an innocent man.” (One of them, Judge William Fletcher, later said in a speech at New York University Law School: “[Kevin Cooper] is on death row because the San Bernardino Sheriff’s Department framed him.”)

A 12th judge wrote in a separate opinion: “Significant evidence bearing on Cooper’s culpability has been lost, destroyed or left unpursued, including, for example, blood-covered coveralls belonging to a potential suspect who was a convicted murderer, and a bloody t-shirt discovered alongside the road near the crime scene. … Countless other alleged problems with the handling and disclosure of evidence and the integrity of the forensic testing and investigation undermine confidence in the outcome.”

There have been many judges in other cases who have turned a blind eye to the truth and let a poor person get executed, even when there were serious doubts about that person’s guilt, but it is rare for judges to speak out against a possible execution. If these 12 judges are ignored, what will happen to me will not be my execution but my murder at the hands of the state of California.

The other five judges, showing their concern about the truth not being told in my case, stated: “The state of California may be about to execute an innocent man.”

The political ideology of many judges allows them to ignore truth and injustice. Politics – the politics of life and death – do play a very real part in this country’s criminal justice system.

That is why Republicans in Washington, D.C., would not allow President Obama to replace Antonin Scalia on the Supreme Court [after his death]. This truth may never be admitted in words, but actions speak louder than words. Among these actions are the continuing oppression of people like me, who are poor and fighting for our lives from within this rotten criminal justice system.

So while finality, rather than justice, may be what certain judges are more concerned with, it is my hope that others in positions of authority – in particular the governor – will see the miscarriage of justice in my case and stand up and speak out to prevent this state from murdering me.

What makes my case unique in many ways is the fact that a dozen federal judges did just that – they stood up and spoke out against my questionable conviction – based on all the evidence and not just what the state claims after hiding, lying, destroying, tampering with, withholding and manipulating the evidence, all of which is exposed in my clemency petition to Gov. Brown.

Just because other judges in my case chose not to acknowledge the truth about it doesn’t mean I’m guilty. This can be said for all the people who have been exonerated for crimes, including murder, they did not commit. Certain judges in their cases upheld bogus convictions and then closed the cases.

I am respectfully asking you, no matter who you are, no matter your religion, your political party, your skin color or your sexual orientation, no matter what your job is, your economic class, or anything else that makes you the individual you are, to please get involved in this fight to save my life, as well as the fight for our collective humanity.

While I may indeed be murdered by the state of California in the not-too-distant future, this fight is not just about me. It is much bigger than me or any one person. It is about us as a people bringing to an end the historic and horrific crime against humanity that is only done against America’s poor people, especially its Black people like me.

My legal team and I have petitioned the governor to grant me an innocence investigation so that he and everyone else can learn the truth about the law enforcement misconduct in my case, as well as DNA testing that we hope will reveal the real killer’s DNA and exonerate me.

While I may indeed be murdered by the state of California in the not-too-distant future, this fight is not just about me. It is much bigger than me or any one person. It is about us as a people bringing to an end the historic and horrific crime against humanity that is only done against America’s poor people, especially its Black people like me.

We are asking the governor to grant me a reprieve so that if this state resumes executions, I will not be executed. The state has me marked for death and has me at the top of the execution list, in part because it did not torture and murder me in 2004, and subsequently because of the attention my case is now receiving, with many people, including several jurors who convicted me, believing in my innocence.

There is entirely too much sadness and pain and inhumanity inside these modern-day prison plantations to go into any one essay. Just know that I am thankful on this Thanksgiving Day that my spirit has endured and is keeping me alive, when all around me is death.

Send our brother some love and light: Kevin Cooper, C-65304, 4-EB-82, San Quentin State Prison, San Quentin CA 94974. This story first appeared on TruthDig with this editor’s note: “Kevin Cooper was convicted of a 1983 quadruple murder in a trial in which evidence that might have exonerated him was withheld from the defense. His case was scrutinized in a June 19 New York Times column by Nicholas Kristof. Visit savekevincooper.org for more information.” Also visit the Kevin Cooper Clemency Project. 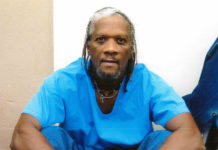 Is it illegal to be Black in America?

‘May your spirit be with us’: Prisoners recall Comrade Hugo ‘Yogi’ Pinell

The Black ones too

Death row debate: Yes or no on the SAFE California Act?