Lake Butler Work Camp, Fla., Jan. 16 — There is one place in the U.S. where slavery is still constitutionally legal: in prisons. The 13th Amendment to the U.S. Constitution, passed in 1864, abolished slavery and involuntary servitude, except as punishment for a crime.

But prisoners held in this enslavement are organizing resistance. Brave prisoners within the Florida state prison system have organized themselves into a month-long work strike called Operation Push. It began on Jan. 15, Martin Luther King Day. In a phone interview, an anonymous prisoner-activist specifically linked the strike to King’s legacy of protest against racism and economic injustice. (tinyurl.com/yafoh75p)

The following call is an excerpt from the full call to action, initially posted online via SPARC (Supporting Prisoners and Real Change):

“We are currently forming a network agency within [Florida] Department of Corrections. We are asking all prisoners within the DOC to take a stand by ‘laying down’ starting Jan. 15, 2018, until the injustice we see facing prisoners within the Florida system is resolved. We are calling on all organized groups, as well as religious systems, to come together on the same page. We will be taking a stand for:

“Along with these primary demands, we are also expressing our support for the following goals: 1) Stop the overcrowding and acts of brutality committed by officers through the FDOC. 2) Expose the environmental conditions we face including extreme temperatures, mold, contaminated water and being placed next to toxic sites. 3) Honor the moratorium on state executions. 4) Restore voting rights as a basic human right to all.”

On Jan. 15 demonstrations in support of the Florida prisoners’ strike took place across the state and country. The strike actions have been endorsed by over 100 organizations.

This writer attended the demonstration at Lake Butler RMC Florida (Receiving and Medical Center) Work Camp, where over 50 people marched up and down the road in front of the prison, voicing support for the striking prisoners.

Prisoners were visible and could see and hear as people chanted, “You are not forgotten, you are not alone, we will fight to bring you home,” “End prison slavery,” and “Brick by brick, wall by wall, we will see the DOC fall.”

On Jan. 15 demonstrations in support of the Florida prisoners’ strike took place across the state and country. The strike actions have been endorsed by over 100 organizations.

Members of prisoners’ families and of support groups spoke in solidarity with the strike. One mother told how her son was falsely convicted at age 14 and sentenced to 58 years in prison; he was sent to an adult prison at age 16. She has had to fight to get medical care for him, with existing care practically nonexistent and prisoners taken ill with life-threatening conditions.

As this article goes to press, a demonstration is taking place in Tallahassee at the Florida Department of Corrections headquarters. DOC has locked its doors and will not provide any statements to the demonstrators regarding the demands of the prisoners or their current conditions.

Karen Smith of the Incarcerated Workers Organizing Committee, who helped coordinate the Tallahassee action at the prison and support on the outside, told WW that there is difficulty now receiving information from the prisoners inside. Smith said: “A lot of the leaders were put in solitary confinement last week. All communication regarding the strike from prisoners ended Sunday night [Jan. 14]. I received a text yesterday stating the prisoners are on strict lockdown and more people are being put into solitary.”

This brave struggle being waged by the most oppressed should serve as a beacon to all people who are fighting the racist, capitalist U.S. system, which was built on the backs of enslaved African people and on land stolen from Indigenous people.

Smith said: “A lot of the leaders were put in solitary confinement last week. All communication regarding the strike from prisoners ended Sunday night [Jan. 14]. I received a text yesterday stating the prisoners are on strict lockdown and more people are being put into solitary.”

The strike inside will only be as successful as the movement we build on the outside to support the prisoners and spread their message to end prison slavery. To become active and find ways to participate, contact fighttoxicprisons.org.

While schools and government offices closed to observe Martin Luther King Jr. Day, activists gathered in front of the Florida Department of Corrections Miami Circuit Office, across from a Miami police station. People from all over South Florida came to rally in support of Florida prisoners planning to go on strike.

Codenamed Operation PUSH, the strike began as a way for incarcerated people to protest the injustices being done to them within the confines of the prison, including violations such as ridiculous price gouging for the basic goods made available for inmates to purchase while they are paid extremely low wages for their labor.

So far, over 100 organizations have come forward to stand in solidarity with the astoundingly brave prisoners, who are fighting for justice within the unjust system of mass incarceration. By 1 p.m., the rally commenced with people bringing signs, shirts and banners all showing their support with the striking prisoners. Organizers across many different political backgrounds, from groups like the Democratic Socialists of America to various anarchists, came out en masse to show their unwavering solidarity, letting the prisoners know they are not alone!

People from all over South Florida came to rally in support of Florida prisoners planning to go on strike.

On the ground Liberation News spoke with Ira, one of the leading organizers of the rally who was with an organization, based out of Lake Worth, sending books to prisoners called the Prison Book Project. “When we heard that there was a strike, we really wanted to stand in solidarity – not just in the form of sending books, but in bringing people together.”

When asked about the significance of the event, Ira stated that bringing so many people out “shows that people see what the Department of Corrections is doing and we’re vocal about it. We’re coming together.” Ira continues, “[The prisoners] are really risking their safety to get free and we want them to know we see what’s happening.”

As Operation PUSH continues, we must keep our eyes on the prisoners’ struggle for justice and lend our full support as they face brutal repression from a vastly unjust system.

For people just now learning of the struggle unfolding and wondering how they may begin to help, Ira said we could “start by simply humanizing prisoners. A lot of people, when I tell them I do prisoner support work, say, ‘Oh, you support murderers and rapists.’ People don’t understand that that is a low percentage of prisoners. There are alternative solutions and people who are in there are in there for non-violent offenses.”

Another person who was rallying on that day was a DSA member named Bean. Bean was out to “stand in solidarity with the prisoners and do the kind of thing Martin Luther King Jr. would have wanted.” Bean goes further to say, “It’s nice to see people come out for this, it’s nice to see that the movement to abolish prison slavery is growing and the rhetoric around this is getting more and more radical. It’s great to see people stand up and fight.”

Bean suggests reaching out to prisoners on the inside and communicating with them to help the effort. “If you know someone who’s incarcerated, ask what you can do for them and their fellow inmates.”

As Operation PUSH continues, we must keep our eyes on the prisoners’ struggle for justice and lend our full support as they face brutal repression from a vastly unjust system. We must do whatever we can to de-stigmatize prisoners and let them know that we care and that we stand with them. 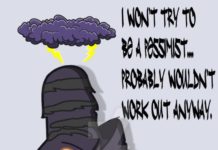 Comrade Malik: USP Pollock! but not quite yet 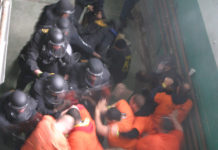