If you are a human being on planet earth
If you can walk, if you can talk
If you have hops and chops
It’s because of the Black Man!

If you have hops and jets
That enable you to defy gravity
And get up and go
You may not be able to fly
Like Michael Jordon
Or jet like Usain Bolt
But you get your hops and jets and chops
From the Father of Man
The Original Man! The Black Man!

You have to understand, humanity
The human egg was but a blob of potentiality
Until it was seeded and fired up
By the Activation and Animation Principle
The Black Magic God Seed
That came from the loins of the First Man
The Black Man!

If you have heat in your breath
And a fire in your chest
That heat and that fire come from the Black Man!
From His Hotness! From the Sun of Man!
Whose life giving rays fire and shine
Throughout all humanity!

Your lifeblood comes from the Sun of Man
From the blaze of the Charcoal Coal Black
Original Man! The Son of God!
The Sun of the Eternal Black Man
The Infinite Blackness that spoke
And said, “Let there be light!”
The One you pray and call out to
When you say, “Amen!” The Hidden One
Who manifests as Amen Ra and Ra
And Jah and Buddah and Krishna and Kryst
And the Muhammads and Malcolm
And Martin and Marley and Mandela
And Monk and Miles and Michael Jackson
And Prince and Fela and Hendrix and Coltrane
And Ankhenaton and Solomon and Huey
And Kwame Nkrumah and Steve Biko
And Sly Stone and Michael Jordon
And Jim Brown and Willie Mays and Sun Ra
And Lebron James and Shaka Zulu
And Farrakhan and Dick Gregory
And Noble Drew Ali and the world’s
Other truly great saviors and noble men
Who descend upon the earth
Like lighting from on high!
Like shooting stars from the loins of the Sky!
The great and courageous Black Men
Just keep on coming!

The Light of the World
The King of Kings is still here!
Still being put on a cross every day
And still resurrecting himself, every day,
Till His Kingdom comes!

Still you have no reverence for the Black Man?

Who am I? I am the way! I am the door!
I am the truth! I am Another You!
Man’s connection to the Godhead
The Original Man! The Father of Man!
The Black Man!

And Still We Rise: a poem for the New Year

I missed my senior prom in high school and have been trying to make up for it ever since. So when I heard the So Oakland Collective was giving a (Second Chance) Adult Prom, I was elated and good to go!

The So Oakland Collective was founded by Shayla Bang, to counter gentrification and raise the public perception of Oakland “one event at a time.”

So I attended the prom in my Golden Fleece and my gold-centric Pharaoh of Oakland attire (see photo). I like to dress like this from time to time in spite of the intense petty hate stares I get.

One of the haters asked if I dressed like that on Halloween? Yes, I did. But dressing like a Pharaoh of Egypt was too easy to do on Halloween because I fit right in! I prefer to do it not just on Simon says it’s OK days.

Fifty years ago the Black folk group called the 5th Dimension, sang a song declaring, “This is the dawning of the Age of Aquarius!” But where is this sparkling New Age? Apparently, it’s not just going to fall out of the sky. So I like to dress like this because if we want to live in a Golden Age, we have to be golden!

An admirable young brother who was bedazzled by my threads and delighted to see a Black man dressed so elegantly, asked me if that was real gold I was wearing, referring to my gold chain and the gold heart connected to it! It wasn’t, but I told him: “Yes, it is. Because I’m wearing it and I’m more golden than gold! And so are you!”

That was another way of me saying that the greatest thing ever taken or stolen out of Africa was not the gold or the oil or the diamonds, but the people!

I like to dress like this to remind myself and others that we are a glorious people. We were glorious in ancient days! We are glorious today! And we will be glorious till infinity!

And so, at the Adult Prom we got all elegant and dolled up in The Town and danced our beehinds off. To let each other and the world know: It’s 2018! And still we rise!!! 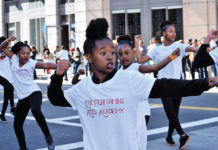 Oakland, you deserve a parade: Black joy to the world