A powerful political figure asks several of his female staffers a favor: “Can either of you gals have my baby? Don’t worry – I’m willing to pay y’all …”

In an era in which sexual harassments, assaults and attacks on women seem commonplace, this case seems like something out of a bad sci-fi movie. 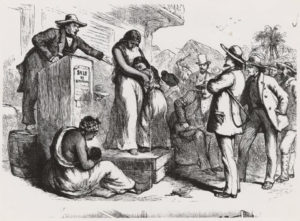 Is this real life? One wonders.

It reminded me of the feminist futuristic classic, “The Handmaid’s Tale,” by Margaret Atwood, where men of wealth and status create a conservative theocracy where women of lower social standing are ordered and taught to serve the wealthy classes, even to the point of bearing them children, over whom they have no claim.

That, in fact, was the true and hidden condition of America at its founding, where African women were raped at will, only to give birth to children who could be sold for profit – at a whim!

The politician who propositioned his staff members, (Rep. Trent Franks, R-8th, Arizona), was a prominent conservative known for his adherence to ‘family values’. Well, for the chance of selling their wombs, the congressman offered them $5 million dollars – some value, huh?

Oh, he didn’t want a baby through in vitro fertilization. He wanted to – uhh – “do it,” the old-fashioned way, y’know, sex.

Even though he’s since retired, doesn’t it give you some insight into how lawmakers think of regular people? I think so.

That logic brought us the horrors and carnage of the Trans-Atlantic Slave Trade, where Black women were bred and sold like cattle.

Over a century later, and the price has risen.