Helen Epstein’s new book, “Another Fine Mess: America, Uganda, and the War on Terror,” is dense with detailed and fascinating accounts of events in Ugandan history and politics and those of neighboring nations. I’m familiar with much of it, but there’s also much I hadn’t known, some I disagree with, and elaborations or different interpretations of what I’ve previously read or been told.

For instance, Epstein writes that Uganda’s widely publicized hostility to homosexuality dates back to the embattled bisexual Kabaka (King) Mwangu of Buganda. Mwangu came to power in 1884, at the age of 18, just as Christian missionaries began converting his subjects in advance of the British officer Capt. Frederick Lugard, who arrived in 1890, armed the converted Protestants, planted the British flag and exiled Kabaka Mwanga to the Seychelles.

Between 1885 and 1887, Mwanga had 45 Christian pages roasted alive, some for spying for the colonialists and others for refusing to engage in sodomy with him after being taught that it was a sin.

“Fear of homosexuals remains widespread in the country,” Epstein writes, “where there has been little modern sex education and where the idea of homosexuality evokes historical memories of a mad young king at the dawn of modern times, whose territory swirled with rumors of approaching armies.”

In 2011, a Ugandan woman then running for a seat in the country’s Parliament told me the same story as evidence that homosexuality had been practiced without punishment in Uganda prior to colonization by the puritanical British. She didn’t mention memories of the brutal young Kabaka as a cause of the country’s contemporary homophobia, but she did inspire me to read a bit more and learn that 75 countries still criminalize homosexuality and 42 of them are former British colonies.

All the details of history and politics in Epstein’s book might at first intimidate readers who haven’t turned much attention to Uganda before, but the book contains a helpful timeline of events in Uganda, Rwanda, Zaire/Democratic Republic of the Congo, Sudan and Somalia at the beginning.

I have one significant disagreement with Epstein. In a section called “Further Reading,” she says that “Barrie Collins’s book, “Rwanda 1994: The Myth of the Akazu Genocide Conspiracy and Its Consequences,” mistakenly equates the revenge killings of Hutus with the attempted extermination of the Tutsis, which he argues was not a planned genocide.”

I agree with Collins about this, along with other scholars and journalists including Peter Erlinder, Robin Philpot, Phil Taylor, David Peterson and the late Edward S. Herman. And I don’t believe that the Tutsi army’s massacres of Hutus were simply “revenge killings.”

However, I greatly appreciate Epstein’s carefully researched account of Uganda and U.S. complicity in Ugandan Tutsi soldiers’ 1990 invasion of Rwanda from Uganda at a time when “Hutu-Tutsi tensions inside Rwanda were actually at an all-time low.” And I agree with her conclusion that the Tutsi army “abandoning negotiations before they’d even begun in favor of war probably cost hundreds of thousands of Rwandan lives.”

The book’s overarching themes are that: 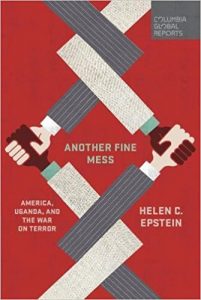 Her primary focus is the post-Cold War period when Ugandans helped the U.S. fight its so-called War on Terror in Sudan, Somalia, Iraq, elsewhere on the African continent and even in Afghanistan. One of the book’s grimmest passages regards President Museveni’s refusal to promote family planning:

“The official told me that Museveni had forbidden the ministry from carrying out family planning programs, even if paid for by donors. Family planning NGOs reached a tiny fraction of the women who wanted contraception; condoms were available at many roadside kiosks, but he acknowledged that few men used them.

“We were sitting at an outdoor café, and he looked stealthily around before answering.

“‘Please don’t write my name,’ he whispered, ‘but the truth is, it’s the army. The president wants a big army.’

“Now I understood. Museveni had turned his beautiful country into a poorly maintained breeding colony for soldiers, whom he deployed in monstrous and unnecessary wars, often at the behest of American generals and politicians who rattled their sabers at Afro-Islamic terrorists, but wouldn’t dream of sending Americans – let alone their own children – to fight them.”

In the May 2016 article, “Uganda’s Top Military Export: Mercenaries,” Bloomberg Businessweek reported that the country made more money on military contractors than on coffee, its other largest export.

Epstein has done medical and public health research in Uganda and the wider region for 20 years, and no passage of her book sticks in my mind more than this one in her introduction:

“I’ve been a public health consultant for over 20 years. In Rwanda, I carried out field research among villagers too frightened to speak to me for fear that government spies would report them if they complained about ethnic discrimination. In Ethiopia, I met listless, starving children in villages denied sufficient food aid because of suspected anti-government sentiment. In Uganda, I interviewed mothers whose children had died of malaria because the president’s cronies looted foreign aid programs meant to pay for medicine and bed nets. Most of the humanitarian programs I worked on were supported by U.S. tax dollars, but they were no match for the U.S.-backed tyrants who caused the problems in the first place.”

Helen Epstein is a Bard College professor and author of “Another Fine Mess: America, Uganda, and the War on Terror.” She has spent decades doing medical and public health research in the African Great Lakes Region. She can be reached at hepstein@bard.edu.

Ann Garrison is an independent journalist based in the San Francisco Bay Area. In 2014, she received the Victoire Ingabire Umuhoza Democracy and Peace Prize for her reporting on conflict in the African Great Lakes region. She can be reached at @AnnGarrison or ann@kpfa.org.