News & Views Local News & Views I am the ‘homeless problem’: The case for the Homeless4Mayor Campaign in...
Facebook
Twitter
Email 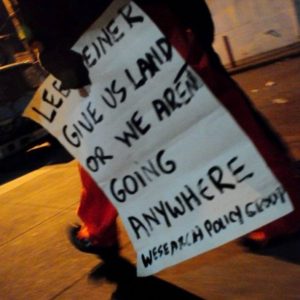 “Don’t turn left, because that area is full of ‘bums’ and doesn’t reflect the real San Francisco,” the cab driver clicked his teeth together as he rattled on about which sights to see in his beautiful San Francisco – which, ironically, due to a gentrification inspired eviction, he no longer lived in.

“Wow, I guess you are talking ‘bout me. I’m one of those ‘bums’ you speak of. I was homeless with my mama and then later with my son for over 10 years of my life,” I shot over the seat in his direction. Cab driver sputtered a sorry under his breath and we all kept driving in silence.

For my entire life I have heard people talk about me as the “other” – from “You people” to “Why don’t you just get a job?” – or slip into third person while talking to the supposedly housed me about me: “Try to avoid those bums over there,” and my all time favorite, “What are we going to do?” or “How can we clean up, get rid of, eradicate, end the homeless problem,” asked by politrickster and housed resident alike.

The last group of hater-ations has always irked me in a special kind of way because it objectifies our homeless and formerly houseless, broken and to’ up lives and bodies into things, equates our mere existence with dirt and trash, and groups all of us different aged, gendered, colored and spirited humans into one gigantic class or thing, like a stack of flat tires or a pile of dirty towels.

As I have written so many times before, this is for many racist, classist and violent reasons, not the least of which is that most U.S. residents have collectively bought into the concept that the absence of humans and things in a landscape means cleanliness, when in fact that is just a corporate aesthetic that we all now collectively buy into. And the mere vision of us in (not really) public spaces with all of our now exposed belongings is automatically equated with criminality.

In most cities across stolen, occupied Turtle Island (aka Amerikkklan), newer, meaner and more violent anti-poor people laws, actions and moves are implemented every day to criminalize, incarcerate, hate and violate unhoused peoples for the acts of dwelling, sitting, standing, parking and sleeping. Hostility comes from violent architecture, such as spiked window sills and metal bars installed on park benches, light fixtures that spray water with chemicals in it to the most recent sick move by San Francisco to arrest service resistant San Franciscans.

This last one has a terrifying twist to it, rooted in the original 19th century settler colonizer pauper laws – the “ugly laws,” where the “service provider” works in tandem with the plantation prison system to incarcerate people who “refuse” service, i.e., humans who for many different reasons, always stemming from trauma, mental and/or physical divergent personalities or police terror, don’t trust or want to receive forced services.

In most cities across stolen, occupied Turtle Island (aka Amerikkklan), newer, meaner and more violent anti-poor people laws, actions and moves are implemented every day to criminalize, incarcerate, hate and violate unhoused peoples for the acts of dwelling, sitting, standing, parking and sleeping.

In the 19th century era of the “Ugly Laws” – there’s a powerful book of the same name by Susan Schweik – settlement house workers who were the early social workers or anti-social workers as I call them, would “offer” services to houseless and poor people and if they didn’t accept the services they would tell the police who would arrest, incarcerate or seize even unhoused disabled people and offer them – force them – into living as in-patients in the settlement houses, which received government funding to provide the services.

There are all kinds of folks living houselessly for all kinds of reasons. From the severe PTSD associated with survival from 21st century colonization, white supremacy/racism, ablism, sexism etc. to the struggle of the working poor, very poor families, children and elders to even pay rent, which was my mama and my struggle – we just couldn’t make enough money in our very small, poor people vending business to afford rent – to the very specific struggle of eviction of elders and disabled peoples from their long-time homes and then the inability to get “back inside,” which demands an endless amount of money, credit, resources, strength etc.

“No matter how many times you arrest, research or study me, it doesn’t get me a home,” I often say.

It’s because of this ongoing and increasing hate, othering, criminalizing and politricking that I and other poverty skolaz at POOR Magazine work so hard every day to manifest a homeless people’s solution to homelessness aka Homefulness. Which is extremely hard precisely because we are folks coming out of struggle and hold all this collective pain, herstory, colonization and trauma in our hearts and are still trying to so hard to heal each other.

“No matter how many times you arrest, research or study me, it doesn’t get me a home,” I often say.

This hate and increased pimping/politricking is also why myself and other unhoused and formerly unhoused poverty skolaz are working on the Homeless 4 Mayor Campaign in San Francisco 2018:

“To put the economic and political leadership on notice that those experience poverty and homelessness due to neglect and social and economic apartheid policies perpetuated by City Hall and the elite class of San Francisco, our voices will not be left out of the mayoral contest. We will not just demand a presence; we will be a presence. We will be a competitor. We will claim our human right to self-determination and occupy political space in San Francisco.” – excerpt from the draft description of the Homeless4MayorCampaign.

Like any mayoral campaign, we have a campaign platform and proposed solutions to all the problems we as humans face in 21st century stolen Turtle Island. Unlike other mayoral campaigns, our candidate is not a popularity contest winner or someone who has raised insane amounts of hoarded blood-stained dollars.

In fact, it’s not about one person “running” at all. It’s a collective candidacy, where a collective of unhoused, formerly unhoused Black, Brown, poor white and indigenous people who have the shared experience of the trauma of houselessness, poverty and criminalization in this stolen land are “running” together to make sure our lives and bodies are no longer pimped for more philanthro-pimped, politricked, non-profiteered agendas, leaving us not only the same but worse off than we were before each new mayor takes office.

Our campaign outreach, headquarters and leadership is rooted in our unhoused communities, encampments, across the Bay Area. Our platform is crafted from our struggle, resistance and our own self-determined poor people-led solutions and something we call WeSearch at POOR Magazine.

We aren’t asking for campaign contributions or trying to raise millions of wasted, hoarded wealth to promote a corporate agenda, or prop up a sexy personality. What we do have are actual solutions not rooted in our destruction, criminalization and silencing. Our tagline is one we po’ folks at POOR Magazine/Prensa POBRE have been saying for years, which we collectively voted in: NO MORE ABOUT US WITHOUT US.

Our campaign outreach, headquarters and leadership is rooted in our unhoused communities, encampments, across the Bay Area. Our platform is crafted from our struggle, resistance and our own self-determined poor people-led solutions and something we call WeSearch at POOR Magazine.

Please join us by writing in Homeless 4 Mayor on the June Mayoral ballot. We are in an emergency and we have no more time for lies, laws or politricks.

For more information, hit us up on Facebook at Homeless4Mayor Campaign or email poormag@gmail.com.