May our Divine Mother-Father Creator of and in All – and Beloved Ancestors from yesteryear and yesterday – find you and (y)our extended family thriving and in healing Spirit. Asé.

By now, many of you may have had the opportunity to view the brilliant screenwriter-director Ryan Coogler’s film, “Black Panther,” which was produced and distributed by the for-profit European-American owned and operated Marvel and Walt Disney corporations. For the past few weeks, people of differing ages and nationalities have been flashing the cross-armed “‘Wakanda’ Forever” sign. i, of course, still prefer and will continue raising my trademark Black Power fist, connecting on some good-ole dap with one of our seasoned brothers, sharing a firm fist bump or offering a warm hug.

Indeed, in this movie, i/WE witnessed more wantu wazuri Afrikans as cast members in, possibly, any production since ALEX HALEY’s “ROOTS” mini-series in the ‘70s. i will not at this time debate the neo-colonialist and imperialistic politics of this technically-stunning visual work.

This genre of fictional stories is all new to me. i was never one who bought “comics” or read about “Super-Heroes.” As a child, i was busy playing ball, working for a few bucks, reading books and selling Black newspapers and JOHN JOHNSON’s JET magazine (for 15 cents).

Therefore, in this grand tradition, WE remember and honor our SUPER-(S)HEROES like Ancestors Rev. Dr. MARTIN LUTHER KING JR. and BOBBY HUTTON, the youngest member of the Black Panther Party for Self-Defense, who were both assassinated 50 years ago this month by agents of these fascistic federal and local governments. And, WE recall the wise, inspirational and creative genius of Ancestors like God(dess) MAYA ANGELOU, whose Sacred Birthday WE recognize on the 4th of April. Asé.

WE are also mourning the assassination of God(dess) and People’s Champion MARIELLE FRANCISO DA SILVA FRANCO – and her driver, Baba ANDERSON PEDRO GOMES – in our Afrikan diaspora nation of Brasil. God(dess) Marielle, who is only 38, was a leader in the Socialism and Liberation Party (PSOL) and the only person of Afrikan ancestry on Rio de Janiero’s City Council.

She was helping lead the mobilizations of Rio’s most impoverished residents for human rights for all, full equality for women, protections for lesbian and gays, reparations, housing, education, clean water and other necessary services, as well as exposing the corrupt and repressive local and federal governments, especially targeting Black people and residents in the favelas (slums). Asé.

WE offer CONGRATS to the Jacot and Bell families and our movement on advocating and rockin da bells for decades to win the release of Baba Herman Bell. One of our longest-held political prisoners, Baba Herman, who was a member of the Black Panther Party, was originally convicted in the 1970s (with Baba Jalil Muntaquin and Ancestor NUH ABDUL QAYYUM, fka ALBERT WASHINGTON), for allegedly murdering two New York City police officers. Collectively, they were known as the New York 3.

Later, Baba Herman and Baba Jalil were forced to defend themselves, along with seven other former BPP members – Ancestor JOHN “JB” BOWMAN as well as elders Richard Brown, Harold Taylor, Hank Jones, Ray Boudreaux, Richard O’Neal and Francisco Torres – for the 1971 death of a San Francisco officer. Eventually, and with the support of a worldwide Free the SF8 coalition, those false charges were dropped. Hopefully, this April, the New York State Board of Parole commissioners will stand by its correct decision to grant his release after more than 45 years of torture and confinement. Visit https://freehermanbell.org/. Asé.

In addition, WE celebrate the upcoming 64th Sacred Birthday of Mumia Abu-Jamal on 24 April. Baba Mumia is another of our heroic Black Panther Party leaders and unjustly-incarcerated Super-Heroes. Though our movement and legal staff were successful in getting him reassigned from more than three decades of torture and neglect on “da real death row,” he is now suffering a “slow death” in the main prison population.

As his case moves to another level this spring, WE invite your participation in the “Rally and March to Free Mumia and Stop Police Terror,” Saturday, 28 April, 12 noon, at OSCAR GRANT PLAZA/FRANK OGAWA SQUARE next to Oakland City Hall, at 14th and Broadway. Updates on Mumia’s case can be found at http://www.freemumia.com. And, go to http://www.thejerichomovement.com/ to learn the stories of our hundreds of political prisoners and how you can help FREE THEM ALL! Asé.

WE offer our support to my incredible home-girl from Kansas City Missouri, God(dess) Angel(a) Wellman, founder of the Oakland Public Conservatory of Music. Offering affordable instrumental and vocal classes for youth and adults, the new location is now the world-renowned California Hotel, 3445 San Pablo Ave., https://www.opcmusic.org/.

CONGRATS to our brilliant God(dess) Ashara Ekoyando, a co-founder of the highly successful Impact Hub, on recently opening her new gallery focused on women artists of color. Her name-sake gallery is located at 560 23rd St. in Oakland’s “Uptown” district. Check it out at https://www.facebook.com/Ashara-Ekundayo-Gallery-512425859143094/.

And, everybody’s main man, Mistah FAB, has turned another baaad situation inside-out. He has successfully relocated his D.O.P.E. – E.R.A. (During Oppression People Evolve – Everyone Rises Above) clothing line and store from its long-time North Oakland location to downtown Oakland. The new address is 1764 Broadway, in the space formerly occupied by The Hat Guys. It’s also approximately one mile east of his cousin’s establishment, NFL star Marshawn Lynch’s BE(A)ST-MODE shop, at 811 Broadway. Asé.

And, finally, to Baba Willie and Mama Mary Ratcliff, publishers of this San Francisco Bay View newspaper. They continue to Gift this incredible vehicle of upliftment and connection to our Queen Califia Bay Area community, international movements for justice and our incarcerated brothers and sisters across the united capitalist prison states of america with very minimal financial assistance. Please aid these Super-(S)Heroes by offering your financial support c/o https://www.gofundme.com/keep-the-bayview-newspaper-in-print.

Jahahara is a Baba (Father), a “FREE-tired” community-labor-environmental and justice organizer, writer, musician and author of several books, including “Many Paths to Kujichagulia (Self-Determination).” Check out samples of his musical catalog at https://soundcloud.com/search?q=jahahara. Reach him c/o support@africansdeservereparations.com or FONAMI, P.O. Box 10963, Oakland, CA 94610 usa. 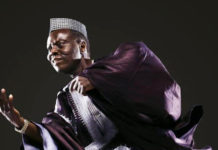