May our Divine Mother-Father Creator of and in All find you and (y)our extended family in healing Spirit and thriving. As always, WE honor our esteemed Ancestors from yesteryear and yesterday, including, most recently, BILL HAMPTON (older brother of the government-assasinated Chairman of the illinois Black Panther Party for Self-Defense, FRED HAMPTON, SR.); Rev. WYATT T. WALKER (pastor and human rights fighter who served as chief of staff for Dr. MLK, Jr.); and, my good and life-long friends MATTHEW “Butch” BROWN, JR., WILLIE “da Sweet Man” PAUL and MONA LISA BRUCE. Long Live the Spirits of these, and so many other, incredible contributors! Asé.

CONGRATS to Queen Mother Betty Reid Soskin, our incredible 96 years-young treasure of valuable wisdom and experience on her publishing her first book, titled “Sign Me Up for Freedom.” While I’ve supported the family’s Reid’s Records in berkeley for two decades, i first had the opportunity to work closely with Mama Betty in our attempts to battle the epidemics of diabetes, heart disease, obesity and other afflictions affecting Black and Brown residents through our West County Healthy Eating Active Living (HEAL) covering the cities of richmond, north richmond and san pablo.

Asante Sana (Many Thanks) to the organizers of numerous Bay Area Black/Afrikan Ourstory-Future Month activities, including: the first “Black Solidarity Week” by the Community Ready Corps for Self-Determination (CRC); the initial Black Joy Parade in oakland; The Village Project in san francisco; and many more uplifting efforts. May WE continue to study the past, discuss, plan and practice – all year long – the achievements and lessons of our Afrikan and world experience in re-creating just and prosperous nations and societies, for All. Asé.

From our Great Zimbabwe … to torturous mississippi!

All over Afrika and our Diaspora …

WE have rights to the fertile soil!

– Lyrics from the song “FREE THE LAND” (Dedicated to the Provisional Government, Republic of New Afrika) by Baba Jahahara, 6238 KMT/1998 JC-PG

In this Spirit of creating just and prosperous nations, this is the 50th Year Commemoration of the founding of the Republic of New Afrika. On 31 March 1968, over 500 revolutionaries from across the u.s.a. came together in detroit for a “Black Government and Governance Conference,” called by the Malcolm X Society and Group on Advanced Leadership (GOAL).

There were many issues affecting “New Afrikans,” as the movement termed the descendants of millions of enslaved Afrikan people on this continent. However, at its conclusion this monumental event produced an incredible platform and program of action, centered on:

The creation of an independent New Afrikan nation-state in the heart of the “Black-Belt South,” where tens of millions of New Afrikan people were enslaved and remain residents to this very day. This includes the demand for the five European settler and enslavement colonies – then and currently known as louisiana, mississippi, alabama, georgia and south carolina – as the basis for the New Afrikan national territory.

A demand for billions in monetary Reparations for New Afrikan people! Almost twenty years later, in late 1987, the now Provisional Government – Republic of New Afrika would co-found – with the National Conference of Black Lawyers and other groups and leaders – a new, mass-based effort known as the National Coalition of Blacks for Reparations in American (N’COBRA).

Organizing a People’s Plebiscite, or democratic decision-making process led by New Afrikan people and organizations, to appeal to the world (through the United Nations, Organization of African Unity, now African Union, and other world bodies).

The building of a People’s Army and militias! And, much-needed cooperatives and collective economic efforts!

Support for other local, national and international struggles of New Afrikan and Afrikan people worldwide.

At its founding, the PG-RNA also elected its first leadership. This included as President, ROBERT WILLIAMS, former revolutionary NAACP leader, National Rifle Association chapter leader, founder of the Black Guard self-defense unit and co-author with his wife MABEL ROBINSON WILLIAMS of the seminal book “NEGROES WITH GUNS.” GAIDI OABADELE, who alongside blood brother IMARI OABADELE were principal leaders of the convening, assumed the position of First Vice-President of the new administration (and, effective President since WILLIAMS was then in exile in China). BETTY SANDERS X SHABAZZ, the widow of EL HAJJ MALIK EL SHABAZZ (aka, Minister MALCOLM X), was elected Second Vice-President.

It goes without saying that the founding and growing expansion in the work of the Republic of New Afrika was earth-shaking, not only to the then “traditional” civil rights movements and leaders. But, even more to the violent usa, state and local governments, coming just a couple years after the formation and growing popularity of the Black Panther Party and its Ten-Point Platform. 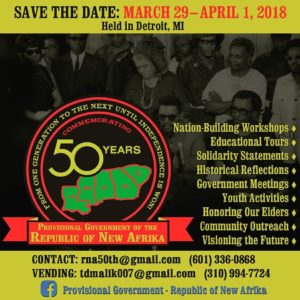 And, as our story goes, when the enslaved begin organizing for real freedom, the enslaver will meet these attempts with the most brutal force. Through its fascistic “counter-intelligence programs (cointelpro),” the usa used the most vicious means to divide, disorient, dismantle and destroy the PG-RNA, BPP, MOVE and other powerful movements. PG-RNA leaders, families and supporters were harassed, falsely accused, arrested, tried, “convicted,” jailed and murdered. Some remain behind the walls to this very day. And, WE must collectively work to Free Them All! Asé.

Fifty years after its founding, the PG-RNA will convene, as it does annually, in detroit for Black Nation Day(s). WE encourage those who can to attend; and those unable to travel to send in a monetary contribution for the ongoing work. It is our hope that you will also be inspired to learn more about and support our dedicated political prisoners by going to www.thejerichomovement.org FREE THE LAND! ByAnyMeansNecessary! Asé.

Jahahara is a Baba (Father), a “FREE-tired” community-labor-environmental and justice organizer, writer, musician and author of several books, including “Many Paths to Kujichagulia (Self-Determination).” Check-out samples of his musical catalog at https://soundcloud.com/search?q=jahahara Reach him c/o www.africansdeservereparations.com or FONAMI, P.O. Box 10963, Oakland, CA 94610 usa.