On Nov. 22, 2017, Brie Morris was called out to see Deputy Warden Parks. There was no reason for Parks to want to see Morris because she is not a troublemaker and at the time had no paperwork.

Brie and I both have mental health issues and we helped one another in various ways. I have been incarcerated for more than nine years. Neither of us deal with many people. We kept to ourselves, encouraged one another and were always there to listen to one another.

We both ended up in MSU because of this move, I on suicide watch and Brie on psych observation. We were both released back into population the next day, Nov. 28, 2017. Brie still refused to go in the zone where they wanted her. She wanted to be heard, for the truth to prevail. I was sent back to my building, where things went bad rather quickly.

After nine years of incarceration, I know all too well how this corrupt system and its officials work. I arrived back on my building still angry about the turn of events. I was told to go to shift command to get a mat and decided that while I was there I would ask to speak to CID (Correctional Investigations Department).

We both ended up in MSU because of this move, I on suicide watch and Brie on psych observation.

I went into shift command and one of the inmate workers gave me a mat. The door to the captain’s office was closed, so I turned to leave – as I went to walk out the door I was met by Capt. Burton and Deputy Warden Parks.

Since they were there, I asked to see CID and they told me to “write them a letter. Maybe they will get it one day.” This is bullshit. Everyone knows that Deputy Warden Parks intercepts all such mail.

Then Capt. Burton and Deputy Warden Parks said that “they were going to show me, teach me a lesson.” Having suffered from mental illness most of my life, my automatic thought was, “No, I’ll show you!” I turned and walked back to my housing unit.

Back inside, I put my mat on my rack, got on my bed and cut my left arm up and attempted to cut my throat open (again). I had slit my throat in 2016 and when I tried to do it this time, I ended up on the old scar and didn’t do the damage I would have otherwise.

I was sent back to MSU on suicide watch. I did not realize at the time that Brie was back in MSU on psych observation as well. From Nov. 28 through Dec. 4, 2017, I was denied a shower. I was given no smock, the window in my cell had been opened and I was seldom given toilet paper.

I stopped eating and drinking for five days and became very sick. The only reason I started trying to eat was because Brie sent word for me to please try. I developed sores on my legs that became severely infected and went untreated. I began to lose touch with reality. I was prepared to die.

Upon my release from MSU, I was told by Lt. Brown to “go ahead and kill yourself because you will never be housed with Morris again. In fact, you need to do your time on your own because any friend you make will be moved away from you.”

So basically I’m being told that I can have no inside support system, which is ridiculous! Deputy Warden Parks has had a vendetta against me since February 2016 when Superintendent King moved me after I attempted suicide. She made the comment then that I was telling them where I would lay my head.

Brie and I are fighting this the only way we can. We write the commissioner, the ACLU Prison Project and anyone else who will listen.

Upon my release from MSU, I was told by Lt. Brown to “go ahead and kill yourself because you will never be housed with Morris again. In fact, you need to do your time on your own because any friend you make will be moved away from you.”

I am all too aware that Deputy Warden Parks, Lt. Brown, Capt. Burton and others want me dead and at my own hand. I’m fighting for my life, for my sanity, for my freedom.

I am fighting for Brie and my family, but I feel I am losing. Since Nov. 28, 2017, I have lost 30 pounds, my hair is falling out and I have become extremely depressed. Brie and I need outside help and we need it now!

Amy and I need outside help and we need it now!

As Amy said, I was moved on Nov. 25, 2017, due to false allegations via letter by another inmate. No questions asked. Warden Parks moved me to another building, a building that housed several inmates who threatened and harassed me.

I had a mental breakdown and was put on psych observation. Five months prior I wrote the letters at different times to Superintendent King asking for a red flag – a restriction where I won’t be housed with certain inmates because of threats and harassment. I included names of some of the inmates.

As Amy said, I was moved on Nov. 25, 2017, due to false allegations via letter by another inmate.

On Nov. 28, 2017, I was released from psych observation. I was taken back to that building. Upon entering the building, I began explaining that I feared for my life because of threats and harassment from certain inmates. I began to name the inmates.

The officer had this “I don’t care” attitude. I asked if she could call CID. She said, “No, I had to call the nurse for you yesterday.”

She closes the tower door. I am in the foyer going out of my mind with fear. She opens the door about maybe 10 minutes later and says, “Go to shift command to see Capt. Burton.” So I am on my way to shift command walking with another officer when intercepted by Warden Parks.

I was in MSU on psych observation from Nov. 28 through Dec. 4, 2017. Before my release on Dec. 4, I was called to see Lt. Brown, who asked me to explain why I couldn’t be housed with these inmates. I explained to her why and she asked the names of the inmates. I gave them to her.

Amy and I need outside help and we need it now!

Lt. Brown looked them up on the computer. Some have gone but a few were still here. Lt. Brown said to me that she could put me in protective custody but I wouldn’t get my 30 for 30. I asked her why would I be punished by not getting my 30 for 30 because of protective custody? I asked why can’t I get a red tag – “keep separate”? Lt. Brown says, “We no longer honor red tags at this facility.”

Then Lt. Brown asks me, “Do you want protective custody or you going to that building?” My back was against the wall. I wanted my 30 for 30. I was still scared, but I went to that building ‘cause I felt I had no choice.

I am nervous all the time and I don’t get much sleep. There are cameras but everything don’t get seen or is ignored. Earlier this week an inmate got jumped on by three other inmates right in front of the camera. The inmate that got jumped on didn’t say anything; neither did anyone else. I feel that my rights have been denied.

Later the officer with the attitude – I found out her name is Tiffany Angrum and she still has an attitude with me. I never had problems with an officer before now. Tiffany Angrum is the officer that wrote my RVR. She wrote me a B3 for disobeying a direct order. I was never given a direct order by her or anyone. My RVR is dated Nov. 28, 2017, but it was served Dec. 7, 2017.

This facility is so corrupt, the wardens, the captains, the lieutenants, the sergeants and other staff abuse their authority. They often tell us we have no rights, that we lost our rights when we got locked up. Amy and I need outside help and we need it now! 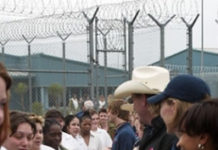 Our children are affected by our incarceration

Gettin’ it right: a message for Black August 2012

I will not allow the beast to win!