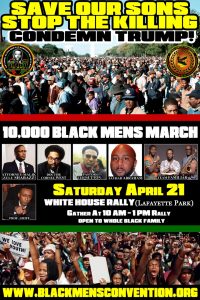 Washington, D.C. – For over six years we have witnessed an ever-increasing pandemic of unjust killings of Black people, Black men in particular, across the nation. During this current era in the sojourn of African (Black) people in America where we are witnessing the virtual wholesale killing of Black people by law enforcement, one can be easily reminded of the anti-lynching campaign advocated powerfully by Ida B. Wells via the pen.

Although tragic, we should not be surprised, however, by police brutality disproportionately impacting the Black community, since police departments were initially established as slave patrols pre-Emancipation to keep us Black people in line; and it is quite obvious that their descendants, modern-day police officers, still serve the same purpose.

Many activists and observers feel that this has been further fueled by the election of President Donald J. Trump, whose brief time in office has produced, as scholar Dr. Michael Eric Dyson asserts, “white supremacy on steroids.”

During a July 2017 address to law enforcement officers, Trump said, “Please don’t be too nice to suspects who are arrested …” and encouraged arresting officers not to follow the longtime practice of protecting the heads of suspects from hitting the edge of police cars while being placed in custody. Since Trump took office it appears that many police officers are now having a free-for-all with brutalizing Black citizens.

The most recent tragedy is the case of unarmed 34-year-old Brooklyn, N.Y., resident Saheed Vassell, who was shot seven to nine times by NYPD officers just days ago. Police said they believed Vassell was mentally ill and “thought” he was aiming a gun at them. It turned out to be a curved metal pipe. 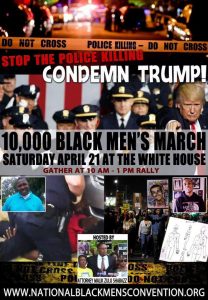 Last month Sacramento, Calif., police shot and killed unarmed 22-year-old Stephon Clark in his grandmother’s backyard. Officers said they “mistook” his cellphone for a gun. They claimed that they were in pursuit of Clark because they believed him to be a robbery suspect. Police Chief Daniel Hahn, the city’s first African American to hold the post, admitted that during the apprehension his officers had turned off their body cameras.

On Thursday, April 5, it was announced that Officer Howie Lake II, who was involved in the July 2016 case of 34-year-old Baton Rouge man Alton Sterling, who was shot and killed by Lake’s partner, Officer Blane Salamoni, while selling CDs in front of a convenience store, was allowed to return to work after serving only a three-day suspension amid a two year investigation into the case. Salamoni, who fired the six shots killing Sterling, was fired last week but is not charged with a crime.

These cases have sparked protests calling for these officers to be fired and charged with murder, as well as reform in law enforcement departments across America.

10,000 Black men demand an end to police brutality and the firing and charging of killer cops

Incidents such as these are why activists are holding the 10,000 Black Men’s SAVE OUR SONS: STOP THE KILLING march and rally against Trump on April 21 – right in front of the White House. The march is a part of the five-day 10,000 Black Men’s Convention set to take place in Washington from April 18-22, which promises to draw thousands.

Topping the gathering’s agenda is a call for an immediate end to police brutality as well as the firing and charging of officers who have been involved in the unjust killings of Black people.

Rally organizers, including scholar and activist Dr. Cornel West and Black Lawyers for Justice National President attorney Malik Zulu Shabazz, say they plan to verbally blast the president and his administration for giving police officers a free pass to brutalize the Black community.

National Black Men’s Convention chair Malik Z. Shabazz says: “The families of police murder victims will stand alongside 10,000 Black Men – or 100,000 people for that matter – and will be on Donald Trump’s doorstep Saturday, April 21, demanding his immediate resignation or removal from office. The escalating pace of police killings nationwide, which are international human rights violations, require us to seek United Nations assistance and international remedies because the Trump administration deliberately fails to act on rogue police murderers across this nation.”

Doshon Farad is a staff writer for Your Black World and has written for several other outlets including Amsterdam News, The Grio, Black Agenda Report and News One.com. He’s also a broadcast journalist. Follow him on Twitter @doshonfarad. For more information and to register, visit www.blackmensconvention.org  and Eventbrite: https://www.eventbrite.com/e/national–black–mens–convention–10k–black–mens–march–april–18–22tickets–42402259299. Contact the organizers at info@blackmensmovement.org or 202-549-4205.